No time to rest, Patrick says 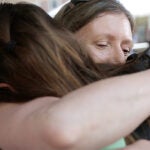 At Commencement, the parents’ perspective

On a day of celebration and achievement, Deval Patrick, the former governor of Massachusetts, told Harvard graduates he hoped they felt uneasy, unsure, and restless: uneasy about the planet’s big problems, unsure they know all they should, and restless enough to act.

“I don’t want unrest in the streets. But I do want unrest in our hearts and minds,” Patrick said. “I do want us all to be uneasy about the grim realities of black men and families and the widespread nonchalance about poverty. I want us to be uneasy about the chronic desperation of communities some of us are just one generation away from living in; about the way we dehumanize the fellow souls we call ‘alien’; about the carelessness with which we treat the planet itself.

“I want us to ask ourselves hard questions and to ask our leaders hard questions about the state of the American Dream, why the poor are stuck in poverty and why the middle class are just one paycheck away from being poor. And I want us all to be a little uncomfortable about how few of our comforts we share.”

Patrick spoke at the Afternoon Exercises of Harvard’s 364th Commencement on Thursday. During Morning Exercises, the University conferred some 6,500 degrees to graduates of Harvard College and the Schools. The Afternoon Exercises, officially the annual meeting of the Harvard Alumni Association, also featured a speech by President Drew Faust, who cautioned the University’s newest alumni to be wary of the selfie generation of which they are part.

“As one social commentator has observed, we are ceaselessly at work building our own brands. We spend time looking at screens instead of one another. Large portions of our lives are hardly experienced: They are curated, shared, Snapchatted, and Instagrammed — rendered as a kind of composite selfie.”

“Assertions about the irrelevance of universities are part of a broader and growing mistrust of institutions more generally, one fueled by our intoxication with the power and charisma of the individual and the cult of celebrity. Government, business, nonprofits are joined with universities as targets of suspicion and criticism. There are few countervailing voices to remind us how institutions serve and support us. We tend to take what they do for granted.”

Faust reminded alumni that Harvard’s work is “about that ongoing commitment, not to a single individual or even one generation or one era, but to a larger world and to the service of the age that is waiting before it.”

Other speakers at Afternoon Exercises included the president of the Harvard Alumni Association, Cynthia Torres, who welcomed the graduates into the University’s alumni community — 320,000 strong, and living in 189 countries. Torres also announced the winners of the medals awarded by HAA for extraordinary service to the University: Charles Egan Jr., Michael Gellert, Thomas Lentz Jr., Sandra Ohrn Moose, and Robert Reischauer.

In his speech, Patrick recalled his childhood, growing up on welfare on Chicago’s South Side, as well as his time as a College undergrad in the mid-1970s, in the wake of the struggles over Vietnam and Civil Rights. Students then, he said, seemed hungry for something to protest. Thus came the march over cold breakfasts at Dunster House.

“If we wanted an egg, we’d have to walk a block to Leverett House. Outrageous!” said Patrick ’78, J.D. ’82, to laughs from the crowd. “So, one spring morning, we marched on Leverett, complete with banners, beating drums, and scores of fellow students never before seen at breakfast time. We took to the streets over pancakes!”

Patrick praised today’s students for their activism and for the causes that have won their attention: poverty, racial injustice, climate change.

But action on those issues, he said, will require more than just protest. It will require sustained effort, and big ideas rooted in core American values: freedom, equality, opportunity, and fair play.

Such values “are the ties that bind us across time and all sorts of mostly superficial differences and that have made America the envy of the world,” Patrick said. “As one great Israeli statesman puts it, ‘America is the only superpower whose power comes from giving, not from taking.’ Indeed, our greatest gift — to this poor black kid from Chicago and to strivers of every type and kind for generations — is reason to hope.”