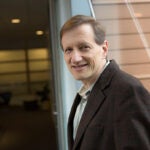 Author, essayist, and historian Stella Ghervas ― a visiting scholar at Harvard’s Center for European Studies ― was born in Moldova; studied in Russia, Romania, and Switzerland; and until recently taught in France.

Her transnational background, along with a mastery of six languages, makes Ghervas a living embodiment of one of her favorite ideas: that Europe is more expansive than most of us think. It’s a region, she said, that historically, culturally, and geographically includes not just the Western Europe of Britain, France, and Germany, but also Russia and a multitude of nations between the Baltic and the Black Sea. Of European history, she said, “We have to have this enlarged understanding.”

This culture-blending longue durée sense of the continent will soon be on display in “What Is Europe? Politics, Power, and Peace, 1700-2015,” a course Ghervas is offering at Harvard Summer School starting on June 22.

Her students will get a novel view of Europe: that its history is more about making peace than it is about making war. The course, said Ghervas, will change the commonplace approach to European studies, which has been to teach a “history of violence: wars, revolutions, strong commotions, a history of discontinuities.”

Later this year, she will complete a book for Harvard University Press on the history of peacemaking in Europe, and its evolution since the 18th century from a place of warring states, to states in uneasy balance, and finally to states in permanent negotiation with one another.

The book, “Conquering Peace: From the Enlightenment to the European Union,” starts in 1713, when the Treaty of Utrecht was signed, ending Louis XIV’s ambitions to dominate all of Europe. This series of pacts, also called the Peace of Utrecht, introduced the term “balance of power,” which for a time, Ghervas said, became the chief way “to maintain equilibrium and peace in Europe.”

In her course, Ghervas will touch on primary documents in the continent’s history of peace. Students will also focus on the personalities whose ideas and actions shaped the concept of a united Europe. Early on was author and thinker Abbé de Saint-Pierre, whose “Project for Setting an Everlasting Peace in Europe” (1713) became a classic. This influential essay proposed a confederation that would have not only a common court but also a common army.

The Enlightenment soon boiled with ideas about the nature of peace and war. Jean-Jacques Rousseau wrote “The Plan for Perpetual Peace” (1756), inviting readers to imagine what he admitted seemed to stretch credulity: a peaceful Europe, tamed by the machinery for regular negotiation, and even a “mankind united by love and friendship.”

Immanuel Kant, in his 1795 “perpetual peace” essay, held that statesmen should follow the example of philosophers, who “dream this sweet dream.” Peace is not a natural state of humankind, he wrote, and therefore can be made durable only if is established through institutions. That idea was a harbinger of the League of Nations.

Essays on perpetual peace ― and on which institutions could best support it ― became so popular, said Ghervas, that in the early 18th century to the mid-19th century they inspired a literary genre. More than 120 essays, she said, were written on the subject during that time.

In the 19th century came more thinkers and diplomats who worked in the direction of peace: statesman and political writer Friedrich von Gentz, who promoted cooperation between the great powers; Tsar Alexander I of Russia, a war hero who championed peace; and Italian patriot Giuseppe Mazzini, whose Young Europe network advocated a “United States of Europe.”

Ghervas will also set out to rescue the memory of Woodrow Wilson, 28th president of the United States. His idea of a body of nations was disparaged in America after World War I, but in Europe today he is a regarded as a visionary figure. In a recent visit to the National Portrait Gallery in Washington, D.C., Ghervas searched high and low for Wilson’s image, finally finding “a small picture in a hidden corner.”

“It was a sign,” she said, of how peacemaking has been relegated to a corner by historians who preferred to see their stories through the lens of war.

From the time of Saint-Pierre onward, “the idea of Europe and the idea of peace” were conflated, said Ghervas, in concepts like “peace as a common project” and Europe as “a peaceful coalition of nations.” Before then, national sovereignty alone was regarded as the guiding principle for European nations.

“The history of Europe has been a race between war and peace, and between imperialism and self-rule,” said Ghervas. The summer course will follow the dates and places that mark that racetrack: 1713 and Utrecht; 1815 and the Congress of Vienna, whose “congress system” of regular meetings began a century of peace in Europe, interrupted only by the Crimean War (1853-56); 1919 and the League of Nations, an attempt at establishing peace through an institution; and 1945, a year that saw the end of the barbarism of World War II, but also a devastated continent and the lowest ebb of European civilization.

“Ideas influence reality,” said Ghervas. But after ideas come the practicalities of “engineering peace,” she added, to create a permanent bridge between “the ideals of peace and concrete reality.”

The class will cross the history of ideas with political and diplomatic history; it will use the past to bring clarity to the present, with crises in Europe foremost. “History is important,” said Ghervas. “It’s not abstract ― it’s thoroughly imprinted on the present.”

Ghervas’ own academic trajectory has evolved within the triangle of an enlarged Europe: Paris or London at one vertex; Moscow or St. Petersburg at a second; and a historical Constantinople (Istanbul) at a third vertex. So another touchstone in her summer course is that history is personal. “I try to remind my students that European history is not only battles, empires, and institutions,” she said. “It is made of real people, with weaknesses and strengths.” Some lived at a grand, nation-shaking level, like Tsar Alexander I; others lived ordinary lives.

History can be written and taught with limitations in mind, as with national narratives that discourage diversity, she said. It can also be taught “to reconcile people, to open their minds, and to make students feel understanding or empathy for other people.”