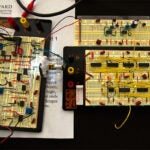 Astronomer to speak on the race for longitude

Imagine trying to find your way across open water with no landmarks and no point of reference. That was the challenge that faced European navigators who launched the Age of Discovery in the 15th century, leaving behind known ports and coastlines to ply the Atlantic and, ultimately, Pacific oceans. Out of sight of land, these sailors relied on the sun and stars, traveling routes known to other explorers ― and to pirates ― and hoping to arrive safely at their destinations.

While sailors had long known how to determine latitude, they entered the 18th century still lacking a way to determine a corresponding coordinate while at sea. No wonder, then, that the race to find a way to determine longitude ― finally solved in 1773 ― was the prevailing challenge of the day. It is also the topic of “Lost Without Longitude,” a lecture to be given at 6 p.m. Thursday by Alyssa Goodman, professor of astronomy at Harvard University, who was recently named the Harvard Foundation for Intercultural and Race Relations’ 2015 Scientist of the Year. The talk will be held at Pfizer Lecture Hall.

GAZETTE: How important is longitude?

GAZETTE: How did sailors navigate without it?

GOODMAN: A large variety of ways, and they often didn’t make it. The most common way is that they didn’t go very far from land so they could see landmarks and places they had mapped. Or you could “sail the latitude.” It’s easier to find your latitude at sea than your longitude — that involves tracking the position of the stars, and we’ve been doing that for thousands of years. Even if you don’t understand why the stars move the way they do, there are repeatable patterns that we observe.

You can pick a latitude and just sail along it until you get in sight of land. Or, alternatively, pick a latitude and go right or go left. But [the problem without longitude is that] you don’t know how far you have gone: You can run out of supplies, you can have mutinies, you can’t explore new places because you don’t know where you are. That was the Columbus problem — he predicted India but he didn’t know North America was in the way.

The other way was to use the relatively crude form [of navigating] known as dead reckoning. That’s where you know where point A and point B are. If you track how fast you are going, frequently, and you take a reading of what direction you are going in, you can kind of plot out a path. It might be a series of a little line segments, northeast at 20 knots for an hour then northwest at 10 knots for two hours. … But the errors compound. If the previous one was wrong, your true position will get farther and farther from the calculated position.

Pirates made a lot of money because this sailing at latitude was less dangerous, so the pirates could just hang out at the popular latitudes and wait for ships to come by. So you’d try dead reckoning in part to avoid pirates, but it was a lot more dangerous.

GAZETTE: You are going to be offering a course, “PredictionX,” as part of HarvardX. How does this fit with predictions?

GOODMAN: The course is a giant two-year effort that involves 25 faculty. I’m the host. We’ve got people who are expert on how humans have predicted their future since very ancient times, Babylonian sheep entrails to now, where we’re worried about climate change simulation and epidemiology. But the middle of that story is the story of predicting your course.

GAZETTE: Could you find your longitude, if you were cast adrift?

GOODMAN: Yes, using my iPhone. Until it ran out of power.