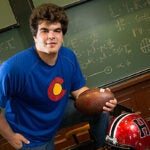 In June, the venerable Harry Elkins Widener Library turns 100 years old. It’s the centerpiece of the Harvard library system, and also the largest university repository of books and manuscripts in the world.

Widener was a triumph that followed a tragedy. It went up because the RMS Titanic went down. Aboard the British luxury liner that hit an iceberg and sank in 1912 was the library’s namesake, a 27-year-old Philadelphia book collector who had graduated from Harvard in 1907. During the dedication ceremony for the library, U.S. Sen. Henry Cabot Lodge said, “This noble gift to learning comes to us with the shadow of a great sorrow resting upon it.”

The library’s exterior has since become a popular photo backdrop. Generations have snapped its imposing pillars and its broad staircase of pale granite. But no one had taken a picture of the 27 steps as a bird might see them. Pictured above is a composite image showing each segment of each step in the front staircase. A century-long pattern emerges. The dark center marks where 100 years of foot traffic was heaviest. To either side, faint pathways appear, wriggles of wear from those to who took the less-traveled path.

The collective effect is ghostly: all those footfalls, over all those years. It is also a physical artifact of the scholarly work done by generations of trudging students; of the famous who stood there, from Winston Churchill and George C. Marshall to Walt Disney and John F. Kennedy; of the marveling tourists who walked up to the door of wrought iron and glass.

The steps lead into a great monument to learning, whose scale a century ago dwarfed anything Harvard had ever seen. Widener, made of limestone and red brick, is 250 feet long, 200 feet wide, and 80 feet high. It has 320,000 square feet of useable space, 57 miles of shelving, and five miles of aisles stacked on 10 levels, six above ground and four below. There are more than 4,000 light fixtures and nine miles of electronic cable.

Widener also has three miles of fire alarm cables, a fact that has poignancy in Harvard’s history. A catastrophic fire in 1764 had destroyed the College’s precious library, which at 5,000 volumes was the largest in New England. (Only one volume was thought to have escaped the flames, John Downame’s “Christian Warfare” [1633/34]. But a later accounting revealed that 404 books had survived, most of them on loan or not previously unpacked.) Fear of fire apparently carried over to the construction of Gore Hall in 1841. Harvard’s first separate library building, on the site where Widener is, was cavernously Gothic, but had just one tiny furnace. In cold weather, scholars routinely worked in hats and overcoats.

The scale of holdings at Widener today would astonish a 19th-century Harvard librarian. Around 3.5 million books are housed there, a fraction of the 17 million in the various University libraries, plus 400 million manuscripts and other documents.

Big library or little, it was always the spirit that counted, said Robert Darnton, Harvard’s Carl H. Pforzheimer University Professor and University Librarian, who is retiring at the end of June. “Libraries have never been warehouses of books,” he said. “At Harvard, the library is the heart and soul of the University.” Historian Barbara Tuchman, a 1933 Radcliffe graduate and later a Harvard lecturer, called Widener “my Archimedes bathtub.” Helen Vendler, Harvard’s Arthur Kingsley Porter University Professor, scouted the stacks as a teenager in the 1950s, and called Widener her “Eden.”

The library was established with $2 million from its namesake’s mother, who floated to safety from the doomed Titanic in Lifeboat No. 4. Eleanor Elkins Widener’s gift came just in time. Gore Hall was full by 1861, 20 years after it had opened. By 1868, staffers there were piling books on the floor. An addition went up in 1877 and included the first six-tier iron stacks in an American library. That space was not enough, nor was a second addition in 1906. By 1910, almost 50,000 books had been pushed out of the overcrowded, unsafe, ill-wired Gothic library to be stored, mostly in University cellars. As early as 1902, Harvard had framed plans for a new library. Only the money was missing.

The old library was soon a pile of rubble. On Feb. 11, 1913, after a bonfire had softened the frozen ground, Harry’s brother George D. Widener Jr. ceremoniously dug the first spadeful of soil. On June 16, silver trowel in hand, his mother presided as the cornerstone was laid.

That summer, library director Archibald Cary Coolidge estimated that 50,000 bricks a day were being added to the new structure. Harvard President A. Lawrence Lowell wrote to Mrs. Widener that the library “was literally growing out of the ground.”

The library officially opened on June 24, 1915, Commencement Day, little more than three years after the Titanic sank. Harvard had the gift of a timely presence: Coolidge, an orderly and imaginative professor of modern history, had started as library director in 1910. The 1887 Harvard grad used the new library as a springboard to bring in major collections, give Harvard’s libraries an international scope, and regularize a chaotic cataloging system.

On that 1915 opening day, Coolidge ceremoniously carried John Harvard’s copy of Downame’s “Christian Warfare” up the Widener steps. Waiting by the door, Mrs. Widener presented Lowell with the library’s keys. Inside, Lodge delivered his short address on “a monument to a lover of books.” Lowell, dismissing Gore Hall as “a detriment to scholarship,” called the dedication of Widener “one of the great events in the history of the University.”

Moving books into the new library began that afternoon. Twelve men made 12 trips a day, delivering 32 open boxes of books at a time, about 46,000 volumes a week, until Oct. 7.

“When Widener opened, librarians were in an acquisitive mode,” said Houghton Library coordinator of programs Peter X. Accardo, who worked in Widener 30 years ago. Coolidge — a world traveler and “part diplomat” — became the center of a golden age of library acquisitions.

For decades after 1915, the local and national press kept up a drumbeat of stories about Widener’s exhibits, acquisitions, openings, and visits by the famous. “We have forgotten its newsworthiness,” said Accardo.

In 1937, new University librarian Keyes D. Metcalf accelerated staff professionalism and oversaw a widening library footprint at Harvard. Houghton opened in 1942, joining other nearby libraries that took pressure off Widener, which had reached its capacity 20 years after opening. Lamont followed in 1948, eliminating the postwar “rush hour” at Widener’s circulation desk.

The New England Deposit Library also opened in 1942, signaling a book-storage future that led in 1986 to opening the Harvard Depository, 35 minutes from Harvard Yard. (Today, about 10 million volumes are stored there, more than half of the University’s library holdings.)

In a digital age, “there’s still a place for physical collections,” said Accardo. Look at a William Blake engraving or a John Keats manuscript, he said, and “you get that feeling of immediacy — of discovery.”

Accardo was at Harvard when Widener underwent a major renovation starting in 2000, when in warm weather the upper floors felt like “an inferno.”

Organizational updates came, too. “The card catalog was my lifeblood when I started here,” said Accardo, but by 1981 it was also available on microfiche. In 1985 came the Harvard Online Library Information System (HOLLIS), a backronym named after Thomas Hollis V of London. In 1774, he bequeathed a book fund that is still buying titles.

Hollis would be wide-eyed at today’s Widener, which is far more than a giant bookshelf. It houses conservation labs — “a modest presence 30 years ago,” said Accardo — along with a bookbinding operation, and a busy digitization service. Harvard’s library system, with Widener at the center, may be the “heart and soul” of the University, said Darnton, “but that doesn’t mean it doesn’t change.”

Rooms with a view

A note about the lead photograph: Inspired by the work of Andreas Gefeller, Harvard staff photographer Stephanie Mitchell took two days to photograph and nearly two years to composite more than 2,000 frames into one image. She captured an impossible perspective — in meticulous detail — of Widener’s iconic stairs. No people were photographed but evidence of human activity and human life is abundant.