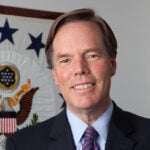 Breaking down the Middle East

A deal on nuclear materials may not be comprehensive, analysts say

As negotiators pushed past a March 31 deadline to hammer out the framework of an agreement limiting Iran’s pursuit of nuclear weapons, a panel of Harvard Kennedy School (HKS) faculty and fellows assessed the likely contours of a possible deal, including the strategic benefits and the dangers such a pact would pose and the ramifications it could have on U.S. politics.

Moderated by Nicholas Burns, professor of the practice of diplomacy and international politics at HKS and former undersecretary of state for political affairs, the panel Tuesday evening included Graham Allison, the Douglas Dillon Professor of Government and director of the Kennedy School’s Belfer Center for Science and International Affairs; former U.S. Sen. Kay Hagan from North Carolina; Gary Samore, executive director for research at the Belfer Center; and William H. Tobey, a senior fellow at the Belfer Center and deputy administrator for defense nuclear nonproliferation at the National Nuclear Security Administration.

Although Allison and Burns thought it likely that U.S. Secretary of State John Kerry would soon announce the outline for a preliminary accord, some in attendance criticized the deadline imposed on the talks by President Barack Obama, saying it was designed to head off congressional legislation that calls for additional sanctions, but instead put the United States back on its heels strategically.

“Now that has really put the U.S. at a disadvantage in this round of negotiations because Washington needs a positive outcome more than anybody else. And naturally, the Iranians have taken advantage of that by sticking to very tough positions on a number of the outstanding issues, like sanctions relief, research and development of their nuclear activities, and [they] even reopened some old issues that everyone thought they had agreed to earlier,” said Samore, a former adviser to Obama and the White House on nuclear weapons.

“My guess is that if they do produce an announcement, it’s likely to be pretty vague, it’s likely not to have a lot of details, and many of the issues will be deferred to the next three months of negotiations for a comprehensive agreement by the end of June. And the administration, of course, will portray this as sufficient progress to justify Congress holding off additional legislation. We’ll see whether or not that works,” he said. The negotiations continued past the earlier deadline.

Congress is highly unlikely to repeal existing sanctions against Iran no matter what kind of agreement is drafted, and it appears to be getting close to having a veto-proof majority for new legislation that would expand and extend sanctions, panelists said.

“The reason we are where we are today is because of the sanctions,” said Hagan, who sat on the Senate Armed Services Committee and on the Banking Committee, which oversees sanctions. She is now a spring fellow at the Institute of Politics at HKS. “I really think strong sanctions have brought Iran to the table. … That’s why I think Congress, in particular the Senate, is so entrenched in being sure that these sanctions stay in place for this period of time,” she said, citing the Corker-Menendez bill in the Senate, which has strong bipartisan support and is expected to come up for a vote by the Senate Foreign Relations Committee on April 14.

The essential framework of an agreement, Samore said, would include placing physical limits on Iran’s ability to produce highly enriched uranium and separated plutonium for use in nuclear weapons that incorporate a one-year breakout period to give the United States and other parties time to stop Iran should it decide not to abide by a deal; monitoring and verification that goes beyond normal International Atomic Energy Agency (IAEA) inspections to make sure no secret buildup takes place; and, most importantly, the schedule of sanctions relief. With a damaged economy, Iran wants immediate relief and relief without conditions, while the United States prefers gradual relief, conditional on Iran’s compliance with any deal.

“I think that disagreement is likely to continue up until the very last minute, until June 30, and it wouldn’t terribly surprise me if the negotiators can’t close the gap and decide to seek a third extension of the status quo, which I think would be OK because I think the status quo has been effective” in freezing Iran’s progress, Samore said.

Tobey expressed concern about two aspects of a potential deal, questioning the still-incomplete American understanding of the “military dimensions” of Iran’s nuclear activity over the past several years. Iran’s failure to report its actions fully to the IAEA remains “a huge problem,” he said. “I think it’s an indicator of Iran’s willingness to comply with a deal once it’s signed.”