Unsettled by the bomb 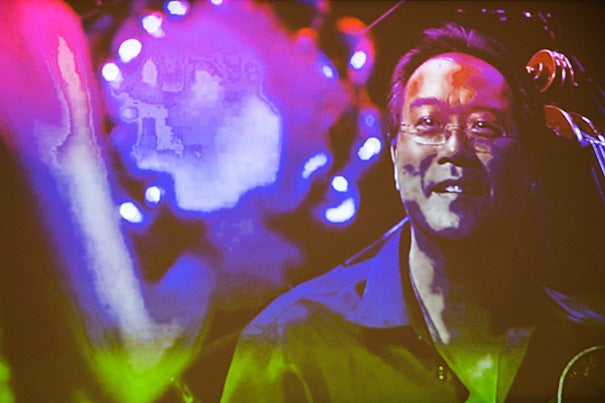 Vincent J. Intondi was a graduate student in history in the summer of 2005 when he made his first visit to Hiroshima. Sixty years before, an American B-29 had dropped an atom bomb on the Japanese city, delivering nuclear devastation with a killing fireball brighter than the sun.

That visit to Hiroshima 10 years ago, coupled with meeting survivors of the attack, “fundamentally changed” the course of his own life and scholarship, Intondi told a Harvard audience on Monday. He was seized with an idea: that the Aug. 6, 1945, bombing (along with the one three days later on Nagasaki) was a racist act.

Surely, Intondi thought, such apocalyptic tactics never would have been deployed against, say, all-white Berlin. He believed that the bombs could only have been used against an enemy of color, the Japanese, who were the “bowlegged cockroaches” of the war, he said, and had been demonized as objects of “genocidal race hatred.” (The same tactic of demonization, he added, was used to allay feelings over the trans-Atlantic slave trade of 1619 and beyond.)

In his studies, Intondi explored a corollary American question: What had blacks thought of using the bomb in 1945? “Over and over,” other academics told the young scholar, he said, “you’re not going to find much.”

Searching reactions in the black press in that era, interviewing veterans of the American Civil Rights Movement, and thumbing through archives, Intondi found a lot: a pattern in the black community of skepticism over nuclear weapons, or an active hatred for them. His findings are in his dramatic and readable new book “African Americans Against the Bomb: Nuclear Weapons, Colonialism, and the Black Freedom Movement” (Stanford University Press, 2015).

American blacks in 1945 objected to the bombs, despite polls at the time that showed Americans overwhelmingly in favor of using them. “The majority of the American public rejoiced,” said Intondi, since atomic weapons were “revenge for Pearl Harbor.” As late as October of that year, no more than 4.5 percent of Americans disagreed with using the bomb.

But to those on the other side of the color line, he said, the atom bomb seemed like a logical implement of race war: Business as usual, though writ large. Pioneering civil rights leader W.E.B. Du Bois compared President Harry Truman, who decided to drop the bomb, to Adolf Hitler. In a letter to a friend, novelist and folklorist Zora Neale Hurston called Truman “the butcher of Asia.” Civil rights leader Malcolm X once told some Japanese visitors, “The bomb that hit us was racism.”

Intondi found that some American blacks saw the atomic bomb as a continuation of global imperialism, a weapon aimed at anti-colonial liberation movements around the world. He pointed again to Malcolm X, who said the real civil rights issue was “universal human rights.”

Intondi also pointed to the early Black Panther Party, internationalists whose first executive mandate claimed the bombing of Hiroshima was an act of colonialism. “Everything we did,” founding chairman Bobby Seale told him, “was part of an international framework.”

And above all, Intondi pointed to Pan-Africanist and icon of the left Paul Robeson, the acclaimed actor and singer who directly equated the atom bomb to the last shiver of imperialist fervor.

Intondi discovered that Cold War history belongs to American blacks, too — that despite the McCarthy witch hunts of the 1950s, they never let go of the issue of nuclear disarmament. “Yes, the links were weakened, but they were not severed,” he said. In that era, left-leaning political stands or racial activism could mean losing a job or landing in prison. “One of the worst things you could be labeled in this country,” said Intondi, “was black or red.”

Black Americans were active in the Ban the Bomb petition that originated in Stockholm in 1958. (About 2.5 million Americans signed it, including musician Duke Ellington and singer Marian Anderson.) They also spoke up again French atmospheric testing in the Sahara Desert in the late 1950s, and saw it as a confluence of anti-nuclear and anti-imperialist energies. Said activist Bayard Rustin, “Everything is connected.”

In 1961, writer James Baldwin equated civil rights and the struggle for world peace. “Both fights are the same,” he said, quoted in Intondi’s book.

During the Civil Rights Movement of the 1960s, the leitmotif of nuclear weapons as instruments of injustice persisted. Martin Luther King Jr., starting in 1957, advocated banning the bomb. In 1968, he compared such weapons to Dante’s hell. “It would be rather absurd to work to get schools and lunch counters integrated,” he said, “and not be concerned with the survival of the world in which to integrate.”

The role of black Americans in international issues, from the 1930s on, needs to be brought more into the cultural light, said Intondi. Rosa Parks, King, and the month of February are seen as the entire sum of African-American history, he said, but “I hope my research will stop that.”