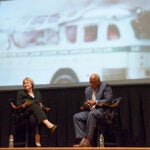 Harvey Cox has spent years reading and studying scripture. In his new book, “How to Read the Bible,” Cox, the Hollis Research Professor of Divinity Emeritus at Harvard Divinity School, argues that even in a secular age, a close reading and deeper understanding of sacred texts is vital to understanding who we are. His approach combines a reading of the original texts with the most recent literary and historical biblical studies.

GAZETTE: What inspired you to write this book?

COX: As both a minister and a professor I have lived my life on the border between two ways of looking at the Bible. On the one hand, I have participated in how the Bible is read and heard in churches, synagogues, and Bible study groups. On the other, I have worked for 50 years with Harvard colleagues who do some of the best research in historical biblical studies. Being an insider in both worlds has made me notice the big gap between what you might call the ordinary lay reader of the Bible, of whom there are millions, and a rather small group of people who do the exciting research in biblical archaeology, history of interpretation, source analysis, and other kinds of scholarly work in biblical studies. Unfortunately, there is often a degree of mistrust between these two clusters of Bible readers, and it seemed to me that my in-between position put me in a good spot to try and bring them more closely in touch with each other.

Most people, even very educated ones, don’t really know how to approach the Bible. They don’t realize, or at least it doesn’t register as important, that it is a collection of over 60 books representing various voices and genres. It includes history, parables, legends, poetry, love songs, visions, and letters. This means that when you read it you should try to find out what kind of material you are reading. Otherwise you miss whole realms of what it’s about, and you deprive yourself of [a] certain richness in how you understand the Bible.

I know of course that there are those who ask, “Why should I read it anyway?” My answer is it that if you don’t know something about what’s in the Bible, you are not a fully educated person. It informs our literature, our poetry, films, plays, and, whether we like it or not, it has deeply influenced the history and value structure of our whole civilization. It has found its way into our language and into our synapses. It is part of us. Reading it is a way of getting to know both yourself and the essence of our civilization.

GAZETTE: Why did you choose these particular books in the Bible to explore?

COX: I picked books that would be most useful in illustrating the different approaches to current biblical studies. Take, for example, the book of Genesis. The first thing one notices is that it seems repetitious. It has two accounts of the creation and other themes. Why? It’s because its writers wove together a variety of sources. It just cries out for a comparison of the sources that were used. Most know other stories present in the ancient Middle East about the creation and the flood. The biblical writers knew these too, but they didn’t just incorporate them; they reconfigured and reinterpreted them. So the book of Genesis is a natural for studying what we call source analysis ― seeing how its writers recast and stitched together the various accounts that they had at hand for their own purposes.

I also wanted to show people that there is fiction in the Bible. So I picked the book of Job, which starts with the Hebrew equivalent of “once upon a time.” It doesn’t claim to be history. It’s a story that makes an important philosophical and religious point about the meaning of suffering.

With the Gospels or the book of Revelation, I was interested in picking texts in which we can study what we call history of interpretation, that is, how a particular book has been used, misused, applied, misapplied over the centuries. I also wanted to include something about the pitched battles that were fought while our present Bible was being compiled over whether a particular book should be included or not, a process we call “canonization.” Due in part to the recent sensational discovery of ancient scrolls long hidden in caves, people know nowadays, as they didn’t for 1,000 years or more, that there were books like the Gospel of Mary or the Gospel of Thomas circulating among early Christians at the same time as gospels like Mark and Luke, but that did not make it into the canon. It’s no longer possible simply to ignore this exciting research or the questions it raises, which I’m afraid is what some cautious readers of the Bible still do. But this leaves us with the questions of why is Matthew in our Bible and Thomas is not? A mature reader of the Bible today must grapple with these questions, and it is not that hard to do. It takes some explaining, as I try to do. But the reward is a far more satisfying, and I would say deeper understanding of these texts than is possible if you fall back into a default position of reading them literally and with no knowledge of their history.

GAZETTE: Do you think your work can help defuse the science vs. religion debate, help people take a more nuanced vs. an either-or, approach?

COX: I hope it can. Hope springs eternal, I guess, for any writer. Many of these debates swirl around “creationism,” and the case that I make is that the book of Genesis, for example, is not a proto-scientific account to be replaced by the Big Bang theory or the next hypothesis about the origin of the universe that comes along. That’s a misleading way of reading it. The biblical writers were interested in something else: why there was evil in a world created by a good God. So they used the material they had at hand to probe that question. If we understand what they’re trying to do and read it that way, then we can gain a better hold on it. I am reluctant to see the Genesis stories deployed in a debate over creationism, for example; that is quite different from the one for which they were intended. I hope the book helps a little bit with that.

GAZETTE: What are some of the key steps you would suggest to someone trying to read the Bible?

COX: They might benefit from going through the stages I went through in my relationship to the Bible. First, for me as a youngster, it was a book of stories. And then later I discovered the historical critical method of reading the Bible, which seeks to locate, in so far as it’s possible, when a given psalm, epistle, chronicle, or gospel was written, by whom, to whom, and why. Then I talk about keeping both the story and the historical approaches in mind in order to move on to what I call a “spiritual” understanding of the Bible. By spiritual I don’t mean just something inward. I mean a holistic understanding of the Bible, one that can make use of various methods, but not become wedged into any one. If you are going to read something in the Bible, for heaven’s sake, know what kind of text you are reading. Is it legend? Is it poetry? Is it metaphorical? Is it history? Is it a love song like in Song of Songs? Just as you don’t look at all the mail in your box, or all the emails on your screen in the same way, so you don’t read all parts of the Bible in the same way. The first step is to find out what kind of literature you have in your hand, what’s the genre? And any standard encyclopedia or even what you garner from Wikipedia will help. This is not an esoteric business. Just look up “Jeremiah,” or “Gospel of Luke” or “Galatians.” It’s not an unfathomable mystery, and then you can read these and other texts in a more informed way.

GAZETTE: What do you mean when you encourage readers to develop a type of dialogue with the Bible?

COX: The flaw in the literal reading of the Bible is you don’t get the sense of scope and depth that you get if you look at it with a historical perspective. There’s nothing wrong with that, but it’s delimiting. On the other hand, the trouble with the historical approach is that it often requires distancing yourself from what the text is saying, holding it at arm’s length. But this is also delimiting. I think the significance of the Bible is enhanced if you come to it with your preferences or your fears or your expectations up front, if you are open to what it might say to you.

The Bible is at one level a historical document, of course, but that’s not all it is. Reading it should be more like reading a fine poem or going to a good play. You listen and let yourself be spoken to and touched, annoyed, or angered by what it is you’re reading. You make it more of a personal back-and-forth, a dialogue. That will enrich the reading of it for you.

GAZETTE: Can you tell me about your encounter with the Bible when you were sent to jail while protesting with the Civil Rights Movement?

COX: That’s a very important moment in my life because it moved me beyond both the story and the historical approach. I worked closely with Dr. King in his Southern Christian Leadership Conference during the Civil Rights Movement. Once I was arrested in a town in the South along with a big group of young black protestors and some other white supporters. When we were put in the jail we were segregated into two different cellblocks. The warden came by on Saturday afternoon to our cell and he said “You know them colored kids over there, they want a Bible so they can have church tomorrow morning.” Then he chuckled and said, “I gave them one, can’t do no harm.” And I thought, in a way that’s true, but in another way, what inspired them to be out there demonstrating in the street is that they were hearing from Dr. King and other people from that “harmless” Bible that they were equal to white people and deserved all the same dignity and rights. So it has inspired social revolution and social change.

The thing that struck me then was that for these kids the Bible was not just a storybook, and it was certainly not just a historical document to be parsed and analyzed. It was something beyond that. When they were singing, “Go down Moses … let my people go,” they saw the Exodus story about liberation from captivity in Egypt as part of their own story. This opened my eyes to the significance of a Bible which was neither just story nor bygone history. So I saw that I had to move my own understanding of the Bible into that new phase. I finally lit on the word “spiritual,” but I could have said political or personal, a more self-involving reading. I still strongly believe that this old book from so long ago has a powerful and pertinent message for us in the 21st century.