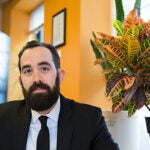 Until late December, and for decades, William R. Crout, S.T.B. ’58, A.M. ’69 — talkative, inquisitive, a gifted listener, and a University man to the core — was a regular perambulator through the Square.

Around Harvard, he seemed ever-present — a charming and calm social North Star. “I often would see him crossing the street,” said urban design planner William Doss Suter, whose office looks out over Massachusetts Avenue across from Wadsworth House. “I half expect to see him again.”

Crout died on Feb. 11 at age 85, and will be remembered at a 10 a.m. service Friday at the Memorial Church. The service will include everything he loved: a beautiful church, a gathering of friends, and music.

Born in tiny Mize, Miss., in 1929, a music and philosophy high honors graduate of Millsaps College in Jackson, Miss., Crout was a student pianist in the late 1940s when he performed at Carnegie Hall and as a soloist in Symphony Hall, Boston. From 1951 to 1955, he served aboard a Navy aircraft carrier, travelling the world as a chaplain’s assistant. Afterward, Crout enrolled at Harvard Divinity School, where he befriended and worked with the celebrated German theologian and University Professor Paul Tillich as a translator and editorial assistant.

Crout was inspired for life by the relationship with the man who had wrestled modern existentialism and Christian symbolism into a synchronous whole. Crout founded the Paul Tillich Lectures in 1990 through the Office of the University Marshal.

Richard M. Hunt, Ph.D. ’60, the retired University Marshal from that era, recalled that for more than a decade his friend oversaw the lecture series from a perch at Wadsworth House. “Bill Crout was a genuine ‘original’ at Harvard,” he wrote in an email. “He was not a faculty member and he was not an employee in any direct sense. But he was an oft-felt presence” — a regular at Morning Prayers, at the Memorial Church’s Sunday services, at Lowell House, and at the Signet Society.

For his beloved lecture series, which he curated until last year, Crout raised funds on his own, and, when money allowed, arranged elaborate post-event dinners. Conversation over a good meal, after all, was a near-sacred ritual for Crout, who was devoted to deep talk and fellowship, and to introducing his friends to one another.

The fate of the lecture series is now in debate, though every one of Crout’s friends interviewed agreed that keeping it alive would be his fondest wish. “He wanted to be sure that Harvard took religion seriously,” and the lectures provided one avenue for that, said Richard Griffin ’51, a former Jesuit priest who was Harvard’s Roman Catholic chaplain from 1968 to 1975. “He lived by Tillich.”

Each of the lectures, held in the Memorial Church once or twice a year, represented a glorious moment for Crout, as did the conviviality each dinner inspired. Of the total lecture experience, said Griffin, “I’m tempted to say it was heavenly for Bill.”

HDS has established a fund both to honor Crout’s life, a spokesman said, and to “perpetuate the memory of Paul Tillich at Harvard.”

Crout held a series of administrative and lecturing positions at Harvard through the years, including the directorship of the Memorial Church School. He was a scholar, a raconteur, a music aficionado, a writing coach, a regular at Memorial Church affairs, a collector of Asian art, and a member of the venerable Signet Society. “He inhabited many more worlds than any of us know,” said Marina Mary Armstrong Connelly ’12.

Crout was also a life coach to students through the Lowell House Senior Common room. Speaking with him, wrote Matthew McCalla ’17 in an email, “I felt as though I were more important, more capable, and more valuable than I was in my conversations with nearly anyone else.” Connelly, an Australian who met him as a 19-year-old freshman, remembered Crout in similar ways. “He was a supporter, a confidant, and a teacher.”

“Bill was enormously interested in students, both through Memorial Church and through his presence at Lowell House,” said Suzanne Hamner of Cambridge, who met him in 1966 when her husband, Easley, was a student at Harvard’s Graduate School of Design. More widely, “he was trying to bring people together,” she said, as a way to honor the kind of welcoming intellectual commons that a university should represent. “He was devoted to Harvard as a living, breathing institution, in the largest sense.”

But his ideals always played out on a human scale. “He had a genius for friendship,” said Kilmer, a friend of Crout’s for 25 years, along with her husband, the painter and art dealer Nicholas Kilmer. They met when Crout happened into an art shop the Kilmers had years ago on Massachusetts Avenue. “Bill walking into your life changes everything,” she said.

“We are not very religious people,” said Kilmer of her household, but they represent the diversity of the friends Crout maintained outside the church circles he otherwise frequented. Another non-church venue was the Cambridge Writers’ Group, five or six friends who gathered weekly, starting in 1994, to discuss one another’s work.

Sessions usually started with Crout delivering an anecdote, “something about Harvard,” said Elisabeth Hatfield ’58. She recalled — like most of his other friends interviewed — that Crout had a wide repertoire of University stories, back-channel tidbits, and even gossip. By the end of each writing group, Crout summed up his thoughts, from a manuscript’s “great intent,” said Hatfield, “to the finest points of grammar. He was a stickler.”

But church venues were often the liveliest for Crout. He was a lifelong Methodist with catholic tastes for a range of Christian services in Cambridge — though he considered Memorial Church his true home, said Suter, as not only a memorial to war dead but as “a place of faith in the heart of a secular university.”

Sonia Voskuil, a Cambridge music teacher who met Crout at the Memorial Church 15 years ago, called him “the conscience of the church,” a sentiment that has been making the rounds since his unexpected death. “I miss him very much. His presence. It’s a loss,” she said. “He knew about community, and he passed that on to us.”

Voskuil met Crout just after he returned from six months in rehab. He was hit by a car on a Cambridge Common crosswalk, and the accident left him with a limp and one drooping eye ― a facial feature that he managed to turn into part of his charm, a physical analog to his wry humor.

Into old age Crout kept the lean frame of the high-mileage jogger he had once been. He was a serious man, and fiercely intellectual. He was also a dapper sartorial holdout. His Brooks Brothers shirts, striped ties, and tweed jackets could make him seem like a dashing apparition from a Harvard long past. Even in winter, said Suter, Crout set off from his apartment near Cambridge Common without a hat, and refused to button his coat.

A few hours after his death, Diana Eck and Dorothy Austin — masters at Lowell House who had known Crout since the 1970s, and who were regular visitors in his final days — sent around an email. Soon, an ad hoc memorial service transpired in their quarters. “It was quite a spiritual moment,” said Connelly. “People just came and said what they remembered, what they treasured.”

Eck, a scholar of comparative religion and Indian studies, remembered Crout most as a fervent churchgoer and an eager socializer at community discussion groups, teas, high tables, and gatherings with students at Lowell. Every year, she added, he “was the first in line to buy a meal plan,” since the lunches created the ideal social architecture for conversation. But it also told something of his personal life. “I don’t think Bill was a cook,” said Griffin.

Suter was among the mourners at the Lowell House mini-memorial. “They put a log on the fire and invited anyone to talk,” he said of Eck and Austin. “Everyone had another piece of his puzzle.”

It was not such an easy one to solve, said Griffin, who marveled at how his longtime friend could be so social and so private at the same time. “There’s that component of him that’s very surprising,” he said, noting that to his knowledge, the one-time piano soloist never played for anyone. “He was a good listener, a fond questioner, but a very private person.”

Two days before he died, on the last day he could talk, Crout was aware of the blizzards seesawing over the region, dumping heavy snow. He looked over at Suter and asked, “How’s your roof?”

When words failed him, Crout devised a code, signing “MP” in the air to ask about Morning Prayers. By Wednesday morning, Feb. 11, he lay still, unresponsive to friends singing hymns at his bedside.

But the friends were still there, as they will be again Friday at Memorial Church. Said Hamner, still moved and amazed, “I was holding his hand when he died.”

Never married, Crout is survived by a brother, Robert, of Huntsville, Texas. Shortly after his sibling’s death, Robert related what could easily serve as an epitaph for Crout’s grave in Hattiesburg, Miss.: “He was a great family man, even though he had no family of his own.”