Home is where one starts out 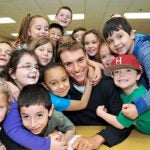 A student from Australia found her niche in Memorial Church choir

I applied to Harvard in one of those frequent bee-in-my-bonnet dreamer’s phases to which I’m prone. I took the SATs and obsessed over the application, but never really connected that process with any outcome. And then the real world asserted itself: final school exams, an Australian summer.

I started college locally at the end of February. Receiving a congratulatory email from the Harvard Admissions Office on April Fools’ Day felt quite wonderful, but also rather perplexing. I had never left Australia before, I am legally blind, and, quite apart from anything else, Harvard was still more a Platonic idea than an actual institution.

I grew up on the campus of the Melbourne College of Divinity, where several professors have Harvard connections and were more than forthcoming with their advice.

One, concealing any sign of levity as only a scholar of the Reformation can, said, “Marina, it’s like ‘The Godfather.’ Harvard makes you an offer … you don’t refuse.” Others, as might be expected, were most concerned with my spiritual upkeep: I could attend chapel services at the Episcopal Divinity School; there was Emmanuel Church in Boston, or the Memorial Church in Harvard Yard. “You will, of course, have to join a choir,” said another professor.

And while at the time I was more interested in reading the College course catalog and discovering where T.S. Eliot had lived during his freshman year, their concern was well informed, and has been invaluable. Because, when all is said and done, I am a homebody, and home has always been, even literally, in the church, and singing in a church choir.

This is my fourth year as a member of the University Choir at Mem Church. I sing for the daily Morning Prayer service, as well as on Sundays. And the place, people, and music really have given me a home here, somewhere to start from.

It has something to do, I think, with the convergence of the divine and the extraordinarily mundane and solid, with each providing its own necessary form of comfort. The church itself, a robust structure, “strong rock and house of defense,” sits reassuringly, certainly at the geographic center of the University. It is fixed, also, as a dependable constant, impervious to the chaos and excitement of all that surrounds it, and that can sometimes be overwhelming.

Most of all, though, I love the community, and the music. I love that my day begins (it often ends, too) in song.

I know the route from Lowell House to the basement entrance of the church so well that my cane is almost superfluous. (There is a cluster of missing bricks in the sidewalk along Holyoke Place, an ill-positioned signpost on the corner of Mount Auburn and Linden Streets to which I have been introduced, several times.) And the morning ritual of rehearsal and worship is, I have found, the most effective antidote to the exhaustions, anxieties, and petty melancholies that are bound to rise in all of us from time to time.

Choral singing is, for me, a truly powerful faithful practice. It is communal, and for community; it has a purpose to it, and, like any worship, it requires work, drudgery, to achieve something sacred. There are some mornings I will make a mistake, or several — forget to take note of an accidental, or misread something — or when the choir troops downstairs after Prayer or Sunday service somewhat sheepish, knowing we haven’t sung as well as we ought.

Many days, we will sing well. But on others, something more happens. More than a seamless performance, it is perhaps that the music approaches the numinous, or that the sacred is present in the music making. I’m not sure which it is. All I know is that these are the times I sing for, that I have always sung for. And find my place in.

There is something romantic about the idea of self-reinvention, adventure, itinerancy, and these were some of the reasons I left my Australian home. I have made another at Harvard, engaging and rich in friendship. I made it almost immediately, and it bears, in some aspects, an alarming resemblance to the one I left, upholding, perhaps, the, ‘you can run, but you can’t hide’ principle.

I often wonder if so much time spent in church is good for my sanity, but I am grateful for this first Harvard home, it is where I start from every day. It is a good home to start from.