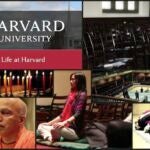 Richard Griffin ’51, once a Harvard chaplain, offers the everyday solace of kindness

On most days, around noon, Richard Griffin ’51 makes his way from the Malkin Athletic Center to the café at Dudley House. His lunch is usually an unrepentant caloric paean to his boyhood in 1930s suburban Boston: soup, milk, and a piece of cake. He invites conversation with whoever stops by — graduate students, Harvard staffers, retired professors, and others who prove that the dapper and voluble Griffin seems to know everyone, or (if he doesn’t) will meet them soon.

“I’m very interested in relationships between older and younger people,” he said. The longtime Quincy House associate, an independent journalist, is married to Susan Keane, and is the father of Emily Griffin ’01.

Griffin was once a Jesuit priest, and Harvard’s Roman Catholic chaplain during the tumultuous years 1968 to 1975, a time of campus antiwar protests and social upheaval. He first arrived at Harvard as a freshman in 1947, settled the next January into Wigglesworth Hall, and left Harvard in 1949 for life in a religious order.

His priesthood ended in 1975, a moment that Griffith, an active Catholic, called “leaving for the world.” In his life now, his ministry is personal.