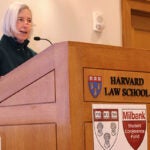 A focus on food

In a talk at the Kennedy School on Tuesday, physicist Amory Lovins outlined a path to a clean-energy future in the United States, one marked by “reinventing fire” through efficiency in things we already do, cost-saving innovation in green technology, and regulatory changes.

That future, Lovins said, would see the U.S. economy growing by 158 percent by 2050, even as it saves some $5 trillion over business as usual. It would see the country’s greenhouse gas emissions fall by 80 percent as coal, oil, and nuclear power are phased out.

“Long ago, fire made us human, then fossil fuels made us modern. Now we need a new fuel that makes us safe, secure, healthy, and durable,” Lovins said. “That turns out to be feasible and, in fact, cheaper than what we are doing.”

HUCE is spending the week trying to engage the entire University community in a conversation on climate change.

Lovins, the chief scientist of the Rocky Mountain Institute, said the institute’s Reinventing Fire plan was developed in consultation with 61 experts. Though the idea of growing the economy and saving money while migrating away from fossil fuels may seem utopian, there are already signs that shift is underway, Lovins said.

For now, power from solar- and wind-generated sources makes up just a fraction of U.S. electricity. But the potential exists for a major increase, as demonstrated by the efforts of countries such as Denmark, Germany, Italy, and Scotland.

Solar photovoltaics are rapidly becoming cheaper, Lovins noted, feeding a cycle where more people adopt them, which in turn reduces the price even more. This dynamic, not just in solar but in a range of renewable technologies, is beginning to disrupt the traditional energy sector, with investors becoming more open to backing renewable energy, Lovins said.

Energy efficiency has significant potential as an area of savings, Lovins said, pointing to the opportunity to lower demand by cutting waste through redesigned systems. For example, water-pumping systems could be redesigned to dramatically increase efficiency by making pipes larger and flows straighter, cutting costs and allowing for smaller pumps.

Aside from redesign, new products come with important benefits. The development of light-emitting diodes (LED) has started to revolutionize the global lighting industry, requiring just a fraction of the energy needed by incandescent and even fluorescent lights, and becoming significantly cheaper in recent years.

LED lights hold particular promise in the developing world, where kerosene provides much of the lighting off the grid. The oil consumes a significant portion of limited family budgets and costs, globally, $38 billion a year. In the end, Lovins said, kerosene amounts to one-fifth of the worldwide cost of lighting, but provides just 1/1,000th of the illumination. One alternative? A 25-percent-efficient solar panel hooked to a battery and an LED, delivering clean light at a fraction of the cost.

With solar photovoltaics, Lovins said, comes not just a way to harness the power of the sun, but also a chance to decentralized the U.S. power grid, making it less vulnerable to outages, whether from equipment failure, natural disaster, human error, or terrorist attack.

On the road, more thoughtful urban design could make cities more walkable and bike-friendly, Lovins said, and a wider-scale shift to electric cars could be encouraged by changing our thinking about their design. One significant problem is posed by the weight and cost of the batteries needed to give an electric vehicle a useful range. Solutions thus far have focused on improving battery technology.

Instead of thinking about batteries, the car itself should be the focus, Lovins said — specifically, building lighter vehicles with existing carbon-fiber technology, whose higher cost could be offset by the need for fewer batteries.

An accelerated transition to cleaner energy would require some government intervention, Lovins acknowledged. However, he sees an escape from congressional gridlock in regulatory changes and state-level legislation.