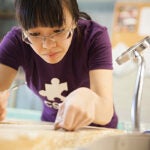 How to recast antiquity

New play aspires to the power of a Rothko

For this weekend only, the Harvard Art Museums will feature two floors’ worth of Rothko.

As part of the “Intersections” series, which juxtaposes student and faculty performances with the Harvard Art Museums’ collections, the Division of Academic and Public Programs will premiere “Red,” a bio-drama about the abstract expressionist Mark Rothko by American writer John Logan. Andrew Gelfand ’15 and Megan Jones ’16, under the tutelage of student outreach and program coordinator Erin Northington, produced the show to work in concert with “Rothko’s Harvard Murals” exhibit.

“Intersections” is “using other forms of artistic expression to interpret and inform the collections here at the museums,” said Gelfand.

Running 90 minutes, “Red” not only provides the contextual fuel to illuminate the layers beneath Rothko’s art, but also captures the fire behind every brush stroke. Opening in Rothko’s Bowery studio in 1958, the play spans two years, with the painter focused on his $35,000 commission for what would become the “Seagram Murals” at the new Four Seasons. “Thirty-five thousand dollars they are paying me,” he says to Ken, his (fictional) assistant and the only other character in the play, with a wry smile. “No other painter comes close.”

The smile is fleeting.

From the outset, it’s evident that Rothko is a complex and tragic figure, brooding with opinions on what art should be and how it should be produced. Ken, played by Kevin Hilgartner ’16, is used to great effect as a foil, bringing forward the painter’s innermost thoughts and desires through argument and discourse. Their war of words — commercialism vs. artistic purity, abstract vs. pop art — is colored with passion.

As a fictional work (if based on real events), the play has the freedom to journey into the myth of the man. The producers took this freedom one step further: Cast in the lead role is Katherine Moon ’14.

“We originally put out the role as a male part and Katherine approached us during common casting,” said Gelfand. “She asked if she could read for Rothko. I was talking to my co-producer and said ‘Why not?’ At the end of the day, she earned the role. Her force, her presence — it really makes this character who he is.”

From the very first line, Moon, as Rothko, challenges the audience to meditate quietly, search deep within, and answer this simple question: “What do you see?”

Ken’s initial response is a timid one, but over the course of the piece he develops the confidence to ask a few questions of his own. The drama between the two men takes the spotlight, with painting serving as a backdrop.

Unfortunately for the production crew, stage directions that called for vibrant scenes of brush strokes and paint mixing had to be nixed. Menschel Hall, the first-floor lecture space designated for the play, is unsuitable for such theatrics. As a compromise, projections designer Daniel Citron built a set of computer animations to be projected in accompaniment to the actors’ performances. Carefully choreographed to demonstrate the act of applying paint, the digital projections cast Rothko’s work in a whole new light. The production team also plans to project animated canvases along the walls and ceilings of the auditorium, to surround every seat in a spectrum of red.

After the curtain call, make sure to take the stairs to Level 3, Room 3500. In the Special Exhibitions Gallery, look for “Panel One.” What do you see? Wait. Move closer. Now, what do you see?

The May 1 performance of “Red,” at 7 p.m., is open to students only; performances Saturday and Sunday (both at 1 p.m.) are open to the public. “Red” is being performed during Arts First (April 30-May 3), an annual festival organized by the Office for the Arts.