The magic to breaking down barriers 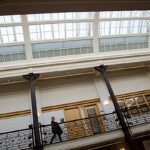 Universities which believe that simply bringing together diverse students in classrooms, residences, and dining halls is enough to make an integrated study body may need to think again.

According to Shaun Harper, executive director of the Center for the Study of Race and Equity in Education at the University of Pennsylvania, that simple assumption amounts to magical thinking ― and it has consequences.

On March 5, Harper addressed “Fostering an Inclusive Campus Environment: From Magical Thinking to Strategy and Intentionality” as the inaugural presenter for the Harvard College Visiting Scholar Program.

Harper said that institutions such as Harvard and Penn often assume that “merely having a diverse student body ensures that [students] will magically benefit from and interact across difference and that the university doesn’t have to do much.” The result, he said, is “Balkanization and inescapable patterns of racial segregation.”

Harper said that at schools across the country, he found areas of campus where only white students (or only black, or only Asian, etc.) congregated ― what he called observable trends of racial segregation.

“When there is no institutional strategy to disrupt that, or at least raise consciousness, we presume it will go away,” he said.

Another consequence of magical thinking is student dissatisfaction and departure. Minority students may feel isolated in classrooms and other campus environments, and attrition rates among blacks, Latinos, Native Americans, and others are often due to on-campus diversity issues, Harper said. In addition, many people from “dominant power groups” come to college with racist, sexist, or homophobic assumptions, and schools need institutional strategies to combat these, he said.

Harper said colleges and universities must intentionally raise consciousness and battle bias on their campuses, developing strategies that bring principles of good educational practices to fruition. Intentionality requires individual reflection, he said, and also demands that colleagues come together to think and talk about the actions needed to disrupt segregation, assure student success, and nurture racially competent global citizens.

“Well-intentioned faculty and administrators are doing things they think will work for students,” Harper said, “But without engaging students as meaningful partners in the design and conceptual building and implementation of these efforts,” they won’t attract students: Cross-sectional partnerships that bring the faculty and administrators together in meaningful and collaborative ways are critical.

Finally, a written, actionable plan that identifies key people and collaborative relationships, anticipates barriers, and forecasts how to overcome them is key, Harper said. “It has to have data, an assessment strategy,” and resources attached to it.

“Too often, I ask administrators for their plan, and they say it’s all here,” he said, pointing at his head. “It’s not a plan if it is not written.”