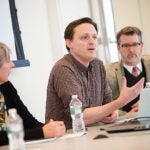 For more than four decades, Laurie Anderson’s music and performance art have delighted and often mystified — so much so that even NASA took notice, offering her a gig as its first artist in residence.

The collaboration with NASA spawned “The End of the Moon,” a sprawling violin concert interwoven with narrative fragments, including the blooper about Anderson hanging up on the NASA representative who’d phoned, out of the blue, to offer her the position.

In the performance, as in her career, Anderson relishes life’s absurdities, explaining: “Finally I called someone at NASA, and he said that yes, I had been chosen to be the first artist in residence at NASA, and he wanted to see if I was interested. And I said, ‘Well, what does an artist in residence actually do? I mean, what does that mean with a space program?’ And they said they didn’t really know what that meant, and what did I think it meant? And I thought: Who are these people?”

Anderson was at Harvard Thursday evening to discuss her career and her varied inspirations, giving the Music Department’s Louis C. Elson Lecture inside the John Knowles Paine Concert Hall.

One of Anderson’s quirky performances earlier in her career, “Duets on Ice,” features her playing violin, donning ice skates, and standing on a mound of ice. The show concluded when the ice melted. But the performance was no twee mishmash of ingredients thrown together and stirred. Instead, it was born out of Anderson’s grandmother’s death. That day, Anderson remembered, she walked outside to a frozen lake where ducks were honking and flapping their wings. As she neared them, she realized their tiny feet had been frozen into the ice.

Addressing the audience, Anderson was wry but sincere, her voice liquid but animated, as though she were casting a spell.

Her art possess an untranslatable magic, but Anderson did her best to break down the very ordinary beginnings of her experimental body of work.

Anderson created a film about the death of her piano-playing dog, Lolabelle, as well as an exhibition imagining the dog’s journey through the bardo, a liminal sphere described in the “Tibetan Book of the Dead,” which results in rebirth.

Even a college graduation in Australia could spark an idea for Anderson. Seated at one next to cellist Yo-Yo Ma ’76, she recalled whispering to him during the ceremony: “Sometimes I look out, and I just imagine the whole audience is dogs … And he said, ‘I have that fantasy, too.’”

That exchange inspired a concert for dogs, which Anderson produced at the Sydney Opera House.

“Thousands of dogs showed up,” she said, prompting laughter from the audience. “A lot of the vets in Sydney had parked all around, expecting trouble, I guess … fainting dogs and whatnot.”

The dogs were even invited to participate in the concert. “It was the most beautiful sound I had ever heard,” Anderson said. “Just dogs! Thousands of dogs, barking, just because they could.”

Anderson’s anecdotes were punctuated with self-reflective gems about her methodology. And though her works are often elaborate and elaborately produced, “I don’t know the first thing about how to make music,” she revealed. “And I’ve found that to be my advantage,” she added, dubbing herself a “dedicated amateur.”

This unrestricted space allows Anderson to make mistakes, she remarked, and, of course, to experience doubt, which is always there.

Returning to her time at NASA, she proclaimed that artists and scientists are more alike than not. “You make something, see what it does, adjust it, and you have the same question in the end — is it finished?”

For Anderson, revision is inescapable but can also be quite unexpected. Discussing one of her films, she read from a story about an accident she endured at the age of 12, when she broke her back diving into a pool but landed instead on the concrete. She spent months paralyzed in a hospital next to children in a burn unit, and the doctor told her she’d never walk again.

“I remember thinking, ‘This guy is crazy. I mean, is he even a doctor?’”

At the hospital, Anderson developed a fascination with President John F. Kennedy, “who had back problems, too.” She also developed a budding disdain for doctors and for long, pointless children’s stories like the ones she was read in the hospital.

Anderson did walk again, and said this story is the one she always tells when people ask her about her childhood. Nonetheless, she had always felt uneasy telling it, she said, like something from the story was missing. One day, telling the story yet again, Anderson was suddenly transported. “I was back in the hospital, and I remembered the missing part. It was the way the ward sounded at night,” she said. “It was the sounds of all the children crying and screaming — the sounds children make when they’re dying.”

Anderson said she had been unaware that the children around her ever died, and no one ever explained their abrupt absence.

“I’d only ever told the part about myself,” she said. “I’d forgotten the rest of it. I’d cleaned it up, just the way the nurses had. And that’s the creepiest thing about stories. You try to get to the point you’re making … and you get your story, and you hold onto it. And every time you tell it, you forget it more.”