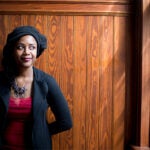 Game is central to course’s rigorous engagement with the humanities

“The Global Game: Soccer, Politics, and Popular Culture,” or “Romance Studies 109,” isn’t simply about admiring the world’s most popular sport — it’s also a window onto some of the most pressing questions posed by the humanities.

“The point is to use soccer as a portal, as an entryway into the disciplines but also the questions that the humanities propose about the production of social meaning,” said Mariano Siskind, the John L. Loeb Associate Professor of the Humanities and a scholar of 19th- and 20th-century Latin American literature. “What is beauty, and why is it called the beautiful game? That’s a central question in aesthetic philosophy.

“We need to shake students up,” he added, “in the way that Russian formalist Viktor Shklovsky asked them to ‘defamiliarize’ the objects they take for granted.”

The course’s co-creator, Francesco Erspamer, is a professor of Romance languages and literatures, and, like Siskind, a lifelong soccer fan.

If students lack a foundation in critical analysis, “when they become leaders or prominent people they will just be repeating or simply adhering to situations instead of being innovative change-makers,” Erspamer said. “This space is where you learn to be courageous, to go beyond yourself, to take some intellectual risks.”

The class grew out a friendship between the professors that began on the soccer field during weekly games and deepened over frank conversations about the challenges facing the humanities. In the last decade, colleges and universities across the United States have struggled to attract students to arts and humanities concentrations, with more undergrads gravitating toward STEM fields: science, technology, engineering, and math.

To help to reverse the trend, Harvard administrators in 2013 released a trio of detailed reports on the humanities that recommended new College offerings, including humanities framework courses, now part of the curriculum, that focus on three areas of learning: the art of listening, the art of reading, and the art of looking.

Siskind and Erspamer’s one-semester class debuted in spring 2012, but anticipated the reports’ findings in the belief that the study of the humanities hones critical thinking, analysis, and interpretation.

Harvard administrators were thrilled with the new offering. Students were thrilled, too. The professors had to switch classrooms twice to accommodate the more than 100 students who signed up.

One look at the syllabus dispels any notion that “The Global Game” is merely a chance to argue about whether Lionel Messi or Cristiano Ronaldo is the best player in the world. Class participation is key, as are weekly response papers to the hefty assigned readings, and a midterm and final exam. Course materials are not in the least restricted to sport, instead leaping from the French philosopher Michel Foucault to the cultural anthropologist Richard Shweder to the Russian literary critic Mikhail Bakhtin.

“They are key texts of humanities inquiry about the production of space and subjectivity, about aesthetic philosophy, about history or popular culture in the Middle Ages,” Siskind said.

Class discussions are just as wide-ranging and demanding. One recent conversation explored how different cultures relate to soccer, including the ways fans in certain countries mock or insult players.

“Should we change significant cultural practices in one place because audiences are watching it from another part in the world and are offended by it? Some said yes,” said Erspamer. The ensuing discussion, he added, “Turned into a debate over the ethics of representation in the context of global cultural difference.”

In another session, students examined how contemporary celebrity culture elevates elite athletes to cult-like status and the ways fans often project their own fears and aspirations onto stars.

“That’s the surface of a phenomenon that is much larger and deeper,” and dates to the Greek notion of the tragic hero, said Siskind. “We use Sophocles’ tragedies and several concepts from Aristotle’s ‘Poetics,’ with special emphasis on the idea of ‘catharsis,’ and try to make sense of the rise and fall of Diego Maradona, one of the best players in the history of the game, famous for his exploits and scandals on and off the pitch.”

Like many of his classmates, James Clarke ’16 brought a soccer-centric mind-set to the first gathering. “To be totally honest, the idea of taking a class from professors who mix business and pleasure really made me smile,” said Clarke, a government concentrator and soccer fan. But examining challenging coursework through a new lens has helped him grapple with important questions about the human experience, he said. “It’s a really fascinating course.”

No less so for Zoe Kessler ’17, whose passion for the game, a product in part of playing competitively in high school, has gained “even more meaning” through the course’s engagement with timeless questions linked to the humanities.

The class has included visits by special guests. On a recent Wednesday afternoon, students jammed Fong Auditorium to hear from former U.S. men’s soccer star Landon Donovan, who discussed how cultural attitudes differ from country to country, as well as soccer’s struggle to gain a professional foothold in America.

But the question that resonated most in the room of high-achieving students had to do with disappointment: What was it like to be cut from the national team just weeks before the 2014 World Cup?

Fittingly, Donovan’s answer touched on a topic many argue the arts and humanities are perfectly suited to engage: compassion.

“It was the first time in my life that I had not made a team, that I had not been chosen,” he said. “I finally had compassion for people that didn’t get everything all the time and that is much, much, much more valuable than having gone to Brazil and playing in a World Cup.” He got a round of applause.

Fun is part of the curriculum, too. At the end of each class, Erspamer and Siskind bring students to the Cesarini zone, named for the Argentine-Italian soccer player from the 1930s famous for scoring miraculous goals in the waning minutes of matches. “It’s a quirky moment in the class, we have fun thinking about the game in a more relaxed, loose, fun way,” said Erspamer.

Lessons from the day’s lecture invariably work their way in. One recent Cesarini zone followed a class discussion about dictatorship and democracy and how soccer can be co-opted by politics. The professors asked students to weigh in on whether World Cup wins should be considered legitimate if the country that took home the trophy did so under dubious political circumstances. A spirited debate ensued.

An upcoming end-of-class conversation will tackle how goal celebrations have risen to an individual art form, buoyed by mass media and the selfie generation.

Erspamer and Siskind realize that they may not win many converts to the humanities with “The Global Game,” but they are convinced they have planted an important seed of intellectual inquiry.

“It’s a way of learning to see a certain complexity that is directly related to art and to philosophy and to discourse and narrative,” said Erspamer. “And it’s learning to see things that are familiar and therefore invisible.”

And sometimes, he said, an encounter with grace and beauty is the payoff. The first five minutes of the first class began with a video clip of the former French superstar Zinedine Zidane faking out his opponents with balletic ease. The clip ended with a quote from the German philosopher Immanuel Kant. (“Everyone has his own taste,” it begins. “But the beautiful stands on quite a different footing.”)

“The idea is that you see that Zidane doing tricks even when he doesn’t need to do a trick,” said Erspamer. “It’s not to show off. It’s simply because he is trying something.”

He added, “Art is the space where you try new things; experimentation is central to aesthetics and the humanities. Just like the most compelling artists, great soccer players push the boundaries of what’s known.”