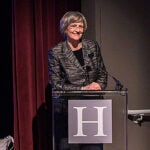 The Crimson in Seattle

Evan O’Dorney will study at University of Cambridge

For Evan O’Dorney ’15, mathematics has been a lifelong passion.

“I started adding when I was 2 and devoured a calculus book in the fifth grade,” he says.

He will now have the opportunity to explore his love of mathematics across the pond at the University of Cambridge. O’Dorney was recently named a Churchill Scholar and will complete Part III of Cambridge’s Mathematical Tripos next year.

O’Dorney was inspired to apply for the scholarship after hearing from past Harvard classmates who had also won the Churchill.

“Since the coursework is extremely flexible, I’m looking forward to conducting my own research and working with Cambridge professors outside of class,” O’Dorney said.

At Harvard, O’Dorney concentrates in mathematics with a secondary field in music. A versatile composer and performer, he plays the organ and piano, and sings. He also composes for and leads Harvard’s Renaissance vocal chamber ensemble, the Lambda Singers, and lately has been exploring jazz piano.

In addition to the Churchill, O’Dorney has won numerous honors and competitions. He was named a Putnam Fellow three times in the prestigious national Putnam Competition, helping lead Harvard to a first-place finish in 2013. He was also a silver and gold medalist at the International Mathematical Olympiad and won the 2011 Intel Science Talent Search.

Although O’Dorney’s participation in the International Mathematical Olympiad has taken him to such diverse places as Spain and Kazakhstan, the Danville, Calif., native has not yet been to Britain.

“I don’t know what it will feel like to see cars driving on the other side of the road,” he joked.

First awarded in 1963, the Churchill Scholarships were created to encourage American students to spend a year studying in England. Each year, the program provides 14 American students with funding for a year of postgraduate study in engineering, mathematics, or the sciences at Churchill College, University of Cambridge. In addition to covering academic costs, the scholarship funds each student’s travel, housing, and visa expenses.