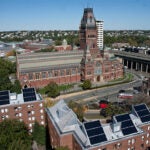 Coach Charley Butt has led the Harvard crew team out on the water just a handful of times this season, ramping up the team’s indoor training instead.

This is not a new training strategy, but more fallout from this year’s unprecedented snowfall and cold temperatures. The Charles River — the team’s practice area — has been choked with ice.

“The last time there was ice this late in the year it was 1967,” said Butt, the Bolles-Parker Head Coach for Harvard Men’s Heavyweight Crew. That year, according to weather reports, it snowed as late as April 24.

Harvard’s crew season officially begins April 4 here in Cambridge against Cornell, and for the past two weeks Butt and his assistant coaches have been breaking up the ice on their stretch of the Charles.

“We won’t be able to race if it’s not melted,” said Butt.

Assistant coach Patrick Lapage has been leading the anti-ice efforts, which are equal parts MacGyver and winging it. Lapage ’12, a onetime government concentrator, takes a boat out with a companion, and whoever isn’t driving stands at the rear of the boat, rocking side to side to break up the ice. Creating waves helps crack it as well, he noted, as does smashing it with an oar.

When it came to other outdoor sports, “keeping all of the athletic facilities open for use during the harsh winter storms was a difficult task,” said Associate Director of Athletics Tim Troville. “The athletics grounds staff worked tirelessly through each storm to prevent the cancellation of recreational activities, practices, and intercollegiate competitions. This year was more difficult than most due to the amount of snow and frequency of storms.”

Crews also worked at all hours to maintain the integrity of “the bubble.”

“The bubble is the inflated structure used during the winter months in Harvard Stadium, allowing many user groups to train during inclement weather. It must be monitored around the clock during snow events to avoid snow buildup and to maintain safe egress paths. The care that the staff took to maintain the safe operation of the bubble translated to very few cancellations of scheduled activities,” Troville said.

Athletics crews also instituted what’s known as the black sand approach — mounting a snow blower to a tractor and cutting walking paths into the baseball and softball fields while they were buried in snow, according to Troville.

“We then spread black sand over the surface of the snow. The black sand absorbs the sun’s rays and radiates heat through the snow. We saw great results. Both fields are nearly ready for play, and we’re looking forward to hosting our first games next week.”