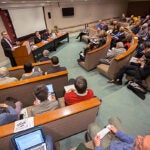 Congress is hard to fathom on a good day, but a group of Harvard students is working to make the task easier, launching a startup that uses advanced software tools to demystify the legislative process.

Quorum has already attracted a handful of nonprofits and lobbying firms as customers. Seniors Alexander Wirth and Jonathan Marks hope to add to the tally when they shift their attention full time to the venture following Commencement.

Quorum is a Web platform that allows users to crunch congressional data in a variety of ways. It offers profiles of every House and Senate member, issue summaries, demographic and statistical data on districts, and features such as advanced searches of congressional press releases and tweets, a scorecard creator for particular votes, and a text-comparison tool that quickly lets viewers see changes to a bill as it advances through the legislative process.

While much of the information has always been available, it often had to be compiled manually, by interns or staffers visiting individual sites. Quorum’s software, Wirth said, automates and speeds up the process.

Among those tools is one that maps votes, sponsorship of legislation, and committee membership to illuminate close ties among lawmakers.

“We believe you should have all the tools needed to plan your legislative strategy at your fingertips in one place,” said Wirth.

Wirth, whose father is a New Mexico state senator, provides the political direction for Quorum, while Marks provides the technical savvy. The team includes eight other students on the technical side and four focused on business development. They meet Saturdays and two nights during the week to work.

The venture is the fruit of the strong innovation environment at Harvard, Wirth said.

Computer science classes taken by Marks, including CS50 and CS109 on data science, provided the technical tools, including the ability to scrape information from congressional and other websites.

With just the threads of an idea last year, the pair applied for the Harvard President’s Challenge. Though they didn’t win, the experience forced them to flesh out their ideas on paper for the first time.

Next they applied for the “Startup R&D” class run by Paul Bottino, executive director of the Technology and Entrepreneurship Center, which provides a range of support for the University’s innovation community, including space for student startups, faculty support for innovation-related courses, and advice for student groups.

Bottino, who launched “Startup R&D” three years ago, said the course typically has students at different stages of the startup process, creating an opportunity to showcase the lessons learned at those stages.

The course doesn’t come with a defined list of subjects to be covered — “This isn’t startup 101,” Bottino said. Materials on organizational development, product development, and customer development are used as needed, depending on where students and startups are in the process. The course prompts students to discuss their ideas and progress, opening them to outside comment and perspective, even though they might more naturally want to toil alone until they have something “perfect.”

Wirth and Marks are “the quintessential startup students,” Bottino said, working on their company in their spare time while still fully engaged in college life. The two are off to a “tremendous start, the company has great prospects, and the founders are learning lessons that will last them a lifetime,” he said, adding that he never tries to predict the future of startups.

“They’re working their tails off … learning an immense amount not only about how to develop a product like this, but how politics works. It’s an incredibly rich experience.”

The pair have gained key support along the way, including from some of the several contests they’ve entered — a total of $16,000 from the Harvard College Innovation Challenge, the Institute of Politics’ Gov 2.0 grant, the Harvard Ventures Pitch Competition, and the MIT $100K entrepreneurship competition. In addition, they were accepted to the Harvard Innovation Lab’s summer program, which provided physical and server space last summer, allowing them to bring the Quorum site from “dots on the screen to a fully functional website,” Wirth said.

“Our entire ability to get off the ground has been because of prize money plus the support of Harvard,” Wirth said. “It’s allowed us to take it from an idea to having paying clients.”

This summer, Wirth said, the team will set up in temporary space in Washington, D.C., to further develop the platform and meet with potential clients.

“It’s exciting to be able to add significant value and look at the system in a new way,” he said.