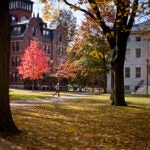 “All governments lie.” That was the stark observation that Ann Marie Lipinski, curator of the Nieman Foundation for Journalism at Harvard, opened with on Thursday, quoting crusading muckraker I.F. Stone from more than 40 years before.

She was addressing a packed Tsai Auditorium audience, gathered for the presentation of the I.F. Stone Medal for Journalistic Independence to documentary filmmaker Laura Poitras, as well as the first I.F. Stone Lifetime Achievement Award to broadcast journalist Amy Goodman. Both awards celebrate Stone’s belief in what Lipinski, quoting Stone again, called “the watchdog role of journalism.”

A visual artist and journalist, Poitras has created a documentary film trilogy about post-9/11 America that culminated with “Citizenfour” about document leaker Edward Snowden and National Security Agency surveillance. Working with journalist Glenn Greenwald, she interviewed Snowden in Hong Kong and helped make public his disclosures about governmental monitoring of citizens. “Citizenfour” has been nominated for an Oscar in the documentary feature category.

The I.F. Stone Medal, created in 2008, is presented annually to a journalist whose work captures the spirit of journalistic independence, integrity, and courage that characterized I.F. Stone’s Weekly, which published from 1953 to 1971.

Goodman is the host and executive producer of “Democracy Now!,” a daily news program that airs on more than 1,300 radio stations worldwide. Since founding the program 19 years ago, Goodman has broken such global stories as the massacre of East Timorese by the Indonesian Army, focusing on alternative — and often unheard — voices.

Accepting her award, Goodman discussed the importance of reporting by talking to citizens, rather than to corporate or government spokespeople. “When you hear someone speaking from their own experience, whether it is a Palestinian child or an Israeli grandmother, an uncle in Iraq or an aunt in Afghanistan, it challenges stereotypes,” she said. “You begin to understand where they are coming from.”

Stressing the participatory nature of journalism, she talked about the shared responsibility of the media and the public. “I see the media as a huge kitchen table that we sit around and debate and discuss the issues of the day. To do less,” she concluded, “is a disservice to democracy.”

A largely visual artist, Poitras chose to illustrate her acceptance with clips from “Citizenfour.” These focused on how Snowden reached out to her because of her previous documentary work, how she partnered with Greenwald and others, and finally how government forces in Europe and the United States have attempted to squelch their work. Her goals, she explained, are twofold. Using “visual journalism” to document how this nation has changed since Sept. 11, 2001, she has sought “to create a primary document — to record history — and then to try to bridge the gap, combine what we know with what we feel.”

“We’ve entered a moral vacuum in the post-9/11 era,” said Poitras, citing not only the widespread NSA surveillance but also the detainments of terrorism suspects at Guantanamo and other abrogations of civil liberties. With her work, she is fulfilling a responsibility “to respond to that moral vacuum,” she said. “To say something.”

The presentation was followed by a brief panel discussion, moderated by Tom Ashbrook, host of NPR’s “On Point” and a former Nieman Fellow. Questions ranged from speculation about Snowden’s future (he has applied for asylum in dozens of countries, said Poitras) to the role of the public.

“As citizens, there are certain things we’re obligated to speak out against,” Poitras responded, while Goodman brought up the case against Julian Assange. “He laid the groundwork for Snowden, and he has clearly risked his freedom,” she said, pointing out that he remains “holed up” in the Ecuadorean embassy in London, where he has received asylum.

Ultimately, talk returned to the role of journalism and the prizewinners’ future plans. “Our job is to go to where the silence is,” concluded Goodman, “to show what is happening on the ground.”