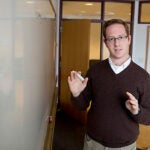 Doctoral student focuses on atmosphere in search for extrasolar life

If life exists on a planet orbiting another star, how would we know?

For Sarah Rugheimer, a Ph.D. student in astrophysics, and her advisor, Phillips Professor of Astronomy Dimitar Sasselov, the answer could be as simple as the air we breathe.

Rugheimer, who defended her thesis in January, has been examining ways to detect life on other planets by the traces it would leave in their atmospheres.

Life is not merely layered on a planet’s physical environment, but is a planetary force itself, cycling chemicals into and out of the ground and ocean and altering the chemical composition of the atmosphere. On Earth, photosynthetic microbes in early oceans gave off oxygen, eventually changing the composition of the atmosphere to the oxygen-rich mixture of gases we depend upon today.

In the study of other planets, though, detecting oxygen in the atmosphere won’t be sufficient to confirm life, Rugheimer said. Though oxygen is released during photosynthesis, it can be generated in other ways — ways that don’t involve living things. So astronomers examining the atmospheres of distant planets will be looking for oxygen together with other chemicals known to be produced by organisms, such as methane.

It is also important, Rugheimer said, to understand planetary context. Stars come in all shapes and sizes and a star’s radiation has a huge influence on the atmosphere of planets orbiting it. Rugheimer is examining how those stellar characteristics affect the photochemistry of a planet’s atmosphere in order to give astronomers a better idea of how the fingerprints of life might appear on a given planet.

“It’s not enough to detect one gas, we have to detect multiple biosignature gases and know the planetary context.”

Those fingerprints would come in the form of spectral lines, revealed by an instrument called a spectrograph. The spectrograph breaks incoming light into its component wavelengths, which are measured by a detector. Because different compounds emit different wavelengths of light, scientists can tell which are in the atmosphere by reading the light signatures.

The daughter of a physicist, Rugheimer avoided the field early in her academic career, but was swayed to switch after attending a presentation on exoplanets and the budding field of astrobiology.

“For the first time in human history we were able to scientifically answer these questions, and I had to be a part of it.”

She is among a new generation of astronomers cross-trained in fields such as biology and biochemistry, better equipping them to carry out the search for life, said Sasselov, co-director of Harvard’s Origins of Life Initiative. Members of the older generation, with training focused strictly on astronomy, have had to play catch-up and educate themselves as exoplanet research advanced from an intellectual exercise to a race to find ever smaller and more Earthlike planets.

“It’s like having kids who are culturally bilingual, who learn two languages as toddlers,” Sasselov said. “They have an intuitive sense for the fields — life and physical sciences — rather than learning one of them later on.”

Rugheimer, who will talk about the hunt for extrasolar life Feb. 19 at the Harvard-Smithsonian Center for Astrophysics, is optimistic that the efforts will eventually find evidence of life on other planets. She counts herself among those who believe that life develops relatively easily under the right planetary conditions and that microbial life, at least, should be common.

Still, she expects the search to take a while. Current findings on exoplanet atmospheres strain the limit of existing technology, creating high levels of uncertainty. It’s possible that the next generation of telescopes, such as the James Webb Space Telescope or the Giant Magellan Telescope (an initiative in which Harvard is a partner), could find something definitive within the next decade, but a 25-year wait is not unlikely.

If life’s signature is discovered on a planet around a nearby star, scientists could then turn to planning the next step, Sasselov said.

“If it’s a very nearby star, why not start thinking about the next century and sending a probe there? I don’t think it’s so outlandish to think about.”