Flaherty retrospective to include Irish gem 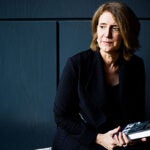 Inuit hunter Nanook was dogsledding across a frozen expanse of northern Canada when he paused at a snow mound. To the viewer of the famed silent “Nanook of the North” (1922), the mound seemed like all the others. But Nanook knelt and cut a hole with his walrus tusk knife. Then he reached in and pulled out a sleepy Arctic fox.

A 2012 discovery at Harvard was no less pleasing. (The fox became Nanook’s pet.) During a catalog update, curators at Houghton Library found the only known copy of a forgotten film by pioneer documentarian Robert J. Flaherty (1884-1951). “Nanook,” Flaherty’s first and most famous film, set the stage for generations of ethnographic filmmaking.

The recovered piece, just 12 minutes long, is “Oidhche Sheanchais” (“A Night of Storytelling”). It was commissioned by the Irish Free State in 1935 and shot by Flaherty during post-production work on “Man of Aran.” Thought to be the first Irish language “talkie,” “Night” features the “Aran” cast, hearthside, along with seanchai — storyteller — Tomas O’Diorain.

In 2013, Barbara Hillers, Ph.D. ’97, an associate in Harvard’s Department of Celtic Languages and Literatures, saw the new catalog entry and realized its importance.

All other copies of the film had been destroyed in a 1943 fire. The Houghton print was purchased in 1935 by the Harvard College Library at the request of Fred Norris Robinson, who had had introduced the study of Celtic languages and literature to Harvard in 1896.

At Houghton, the Flaherty artifact was still in its original film can and wooden shipping crate. “It was like opening a time capsule,” said Harvard Library film conservator Liz Coffey.

From its original nitrate print, “A Night of Storytelling” was restored to 35 mm and the file structure standard called Digital Cinema Package. Collaborating on the project with the Harvard Film Archive (HFA) were the Office of the Provost, Houghton Library, and the Department of Celtic Languages and Literatures. It premiered in July at the prestigious Bologna film festival Il Cinema Ritrovato. HFA Director Haden Guest, who introduced the film there, later called it “an absolutely thrilling discovery.”

The film will get its U.S. premiere on Feb. 15 at Harvard Film Archive, to be followed on Feb. 19 by a symposium on its significance.

“A Night of Storytelling” is part of a retrospective series at HFA, “The Lost Worlds of Robert Flaherty.” It starts Friday with “Nanook of the North,” the 79-minute product of Flaherty’s yearlong stay among the Inuit in Northern Quebec, where he cast locals to play a fictitious family at work and play. He hired other Inuit to be his film crew.

“Nanook” has all the elements of a Flaherty film. The drama comes from a stark portrait of man against nature; the focus comes from a family unit that is fictitious, but plays out real life — with real life often altered to portray an earlier time. Flaherty, the father of the modern documentary, has gained praise for his roughing-it style, but criticism for mixing fiction and fact.

The locals cast as actors in the Samoa-shot “Moana” (1926) had been wearing Western clothing for generations. But in the film, to be screened Feb. 20, the women went topless and everyone wore traditional skirts of tapa grass. A tattooing ceremony, the film’s central illustration of male initiation, was staged. The ritual was a thing of the past, and the actor who was painfully tattooed on screen had to be compensated handsomely.

Still, “Moana” was first to inspire the use of “documentary” as it applied to cinema, in a Feb. 8, 1926, review in the New York Sun by John Grierson, a filmmaker and Flaherty’s friend. But Grierson cautioned the director in a letter to set aside exotic locales in favor of recording domestic travail; “the drama is on your doorstep,” he wrote.

In “Man of Aran,” set for Feb. 15, locals played themselves on the three islands on the west coast of Ireland that Flaherty called “wastes of rock.” They harvested seaweed for soil and plucked giant turtles from the sea. But the film’s dramatic focal point, hunting sharks from small open boats, had not been practiced in the region for generations. Flaherty had to hire Scottish fishermen to give lessons on how it was done.

As a cinematic poet of landscape (Orson Welles compared him to Henry David Thoreau), Flaherty proved his worth by braving the Canadian Arctic, among what he called the “illimitable spaces which top the world.” On the same note, he made the crashing seas of “Aran” as much a part of the cast as the locals who play the father, mother, and child.

The HFA series includes Flaherty’s last film, “Louisiana Story” (1948). It eulogizes the lush landscape of the bayou, but also acknowledges the beauty of machinery at work — the pistons and drill bits and derricks of oil exploration.

The movie, commissioned by Standard Oil Company, was intended to make peace between what critic Leo Marx called the two central tensions in American culture: the machine and the garden. “Louisiana Story” failed in that aim. But it succeeded in imparting what was Flaherty’s central magic from 1922 on: real people, untrained as actors, playing versions of themselves.

“Folklore and Flaherty: A Symposium on the First Irish-Language Film” will be held on Feb. 19 from 1:30 to 4 p.m. at the Harvard Film Archive.