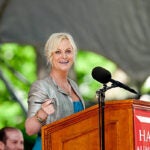 Amy Poehler is the 2015 Woman of the Year

Ceremony will kick off the annual Arts First at Harvard

Ballet dancer, director, and now arts leader Damian Woetzel, M.P.A. ’07, has been announced as recipient of the 2015 Harvard Arts Medal, which will be awarded by Harvard President Drew Faust at a Farkas Hall ceremony on April 30 at 4 p.m. The medal honors a distinguished Harvard or Radcliffe graduate or faculty member who has achieved excellence in the arts and through them has made a contribution to education or the public good.

Woetzel was a principal dancer at New York City Ballet from 1989 until his retirement from the stage in 2008. He holds an M.P.A. from Harvard’s Kennedy School of Government, and in the fall of 2010 he was a visiting lecturer at Harvard Law School, where he co-taught a course on performing arts and the law. Currently he is director of the Aspen Institute Arts Program, which under his leadership aims to further the value of the arts in society, focusing on education, social justice, economics, and diplomacy. He has created events and programs furthering this work in venues from the National Performing Arts Center in Beijing to the Delacorte Theatre in New York City’s Central Park, the home of Shakespeare in the Park. In addition to his role at the Institute, Woetzel is a producer and director of dance and music performances, including the artistic directorship of the Vail International Dance Festival.

The ceremony, presented by the Office for the Arts at Harvard and the Board of Overseers of Harvard College, will include a discussion with Woetzel moderated by actor John Lithgow ’67, Master of the Arts at Harvard and host of the event. This is the official opening event for Arts First, the University’s annual festival showcasing student creativity in the arts, April 30-May 3.

Admission is free but tickets are required, and are available in person at the Harvard Box Office at Smith Campus Center, 1450 Massachusetts Ave., Cambridge, or by calling 617.496.2222 or visiting www.boxoffice.harvard.edu (phone and online ticket orders are subject to service fees). Ticket distribution for Harvard affiliates (two per person, with valid ID) begins April 21; ticket distribution for the public (two per person) begins April 23. Some remaining tickets may be available at the door one hour prior to event start time.

For more information, visit the Office for the Arts website.