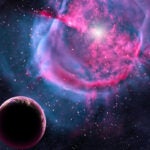 In a sub-basement deep below the Laboratory for Integrated Science and Engineering at Harvard University, Mikhail Kats gets dressed. Mesh shoe covers, face mask, hairnet, pale-gray jumpsuit, knee-high fabric boots, vinyl gloves, safety goggles, and a hood with clasps at the collar.

This gear is not to protect him, Kats explains, but to protect the delicate equipment and materials inside the cleanroom.

While working in applied physics at the Harvard School of Engineering and Applied Sciences, Kats spent countless hours in this cutting-edge facility. With his adviser, Federico Capasso, the Robert L. Wallace Professor of Applied Physics and Vinton Hayes Senior Research Fellow in Electrical Engineering, Kats has contributed to some stunning advances.

One is a meta-material that absorbs 99.75 percent of infrared light, which is quite useful for thermal imaging devices. Another is an ultrathin, flat lens that focuses light without imparting the distortions of conventional lenses. And the team has produced vortex beams, light rays that resembles corkscrews, which could help communications companies transmit more data over limited bandwidth.

The most colorful advance to emerge from the Capasso lab, however, is a technique that coats a metallic object with an extremely thin layer of semiconductor, just a few nanometers thick. Although the semiconductor is a steely gray, the object ends up shining in vibrant hues. That’s because the coating exploits interference effects in the thin films. Kats compares it to the iridescent rainbows that are visible when oil floats on water. Carefully tuned in the laboratory, these coatings can produce a bright, solid pink — or, say, a vivid blue — using the same two metals, applied with only a few atoms’ difference in thickness.

Capasso’s research group announced the finding in 2012. But at that time they had only demonstrated the coating on relatively smooth, flat surfaces such as silicon. This fall, the group published a second paper, in the journal Applied Physics Letters, taking the work much further.

“I cut a piece of paper out of my notebook and deposited gold and germanium on it,” Kats said, “and it worked just the same.”

That finding, deceptively simple given the physics involved, now suggests that the ultrathin coatings could be applied to essentially any rough or flexible material, from wearable fabrics to stretchable electronics.

“This can be viewed as a way of coloring almost any object while using just a tiny amount of material,” Capasso said.

It was not obvious that the same color effects would be visible on rough substrates, because interference effects are usually highly sensitive to the angle of light. And on a sheet of paper, Kats said, “There are hills and valleys and fibers and little things sticking out. That’s why you can’t see your reflection in it. The light scatters.”

On the other hand, the applied films are so extremely thin that they interact with light almost instantaneously. Looking at the coating straight on or from the side — or, as it turns out, looking at those rough imperfections in the paper — doesn’t make much difference to the color. And the paper remains flexible, as usual.

Demonstrating the technique in the cleanroom at the Center for Nanoscale Systems, a National Science Foundation–supported research facility at Harvard, Kats uses a machine called an electron beam evaporator to apply the gold and germanium coating. He seals the paper sample inside the machine’s chamber, and a pump sucks out the air until the pressure drops to a staggering 10-6 Torr (a billionth of an atmosphere). A stream of electrons strikes a piece of gold held in a carbon crucible, and the metal vaporizes, traveling upward through the vacuum until it hits the paper. Repeating the process, Kats adds the second layer. A little more or a little less germanium makes the difference between indigo and crimson.

This particular lab technique, Kats pointed out, is unidirectional, so to the naked eye subtle differences in the color are visible at different angles, where slightly less of the metal has landed on the sides of the paper’s ridges and valleys. “You can imagine decorative applications where you might want something that has a little bit of this pearlescent look, where you look from different angles and see a different shade,” he said. “But if we were to go next door and use a reactive sputterer instead of this e-beam evaporator, we could easily get a coating that conforms to the surface, and you wouldn’t see any differences.”

Many different pairings of metal are possible, too. “Germanium’s cheap. Gold is more expensive, of course, but in practice we’re not using much of it,” Kats explained. Capasso’s team has also demonstrated the technique using aluminum.

“This is a way of coloring something with a very thin layer of material. So in principle, if it’s a metal to begin with, you can just use 10 nanometers to color it. And if it’s not, you can deposit a metal that’s 30 nm thick and then another 10 nm. That’s a lot thinner than a conventional paint coating that might be between a micron and 10 microns thick.”

In those occasional situations where the weight of the paint matters, this could be significant. Capasso remembers, for example, that the external fuel tank of NASA’s space shuttle used to be painted white. After the first two missions, engineers stopped painting it and saved 600 pounds of weight.

Because the metal coatings absorb a lot of light, reflecting only a narrow set of wavelengths, Capasso suggests that they could also be incorporated into optoelectronic devices such as photodetectors and solar cells.

“The fact that these can be deposited on flexible substrates has implications for flexible and maybe even stretchable optoelectronics that could be part of your clothing or could be rolled up or folded,” Capasso said.

Kats, who just concluded his yearlong postdoctoral research position at SEAS, will become an assistant professor at the University of Wisconsin, Madison, in January. He credits those many hours spent in Harvard’s laboratory facilities for much of his success in applied physics.

“You learn so much while you’re doing it,” he said. “You can be creative, discover something along the way, apply something new to your research. It’s marvelous that we have students and postdocs down here making things.”

The Capasso group was supported in this research by the Air Force Office of Scientific Research and Draper Laboratory. The Center for Nanoscale Systems is a member of the National Nanotechnology Infrastructure Network, supported by the National Science Foundation.