The old, made new 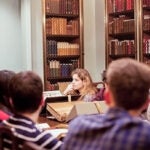 Glimpsing Dublin from the wine-dark sea

Refurbished Semitic Museum celebrates the past while reorienting for the future

The Harvard Semitic Museum opened at its Divinity Avenue location in 1903 on land bought for a dollar from a benefactor.

The sturdy, granite-trimmed, brick building was at the edge of a Cambridge demi-wilderness called Norton Woods. It was next to a residence that has since been moved to Ware Street. Further down was a boardinghouse for immigrant Irishwomen, who cleaned and made beds in Harvard dormitories.

The building, designed by A.W. Longfellow and intended for a planned science complex north of Harvard Yard, was welcome. The University needed a home for its Department of Near Eastern Languages & Civilizations (then called Semitic Languages and History). And it needed room for a growing collection of artifacts from ancient Egypt and Mesopotamia that started in 1889.

The Semitic’s new classrooms, administrators thought, also would satisfy the era’s fervent academic cravings for ancient languages, such as Hebrew and Aramaic, that shed light on the Bible and its historical origins.

The museum then was a gloomy place, “so dim inside,” recounted Marian Cannon Schlesinger ’34 in the first of her two memoirs, “with a single bulb hanging from the middle of each ceiling.” (She grew up next to the building during World War I and lives today, at age 102, on nearby Irving Street.)

Schlesinger and her siblings tested their courage by climbing around projecting masonry on the first floor of the museum. They peered into the windows to glimpse “enormous stone figures of animals and men,” she wrote, within a museum interior that seemed “as unimaginable as a trip to Persia itself.”

To get a look today, there is no need to do a chin-up on a granite windowsill. The front door will do. From the lobby (new), take the elevator (new) to the basement. You arrive at a brightly lit hallway (also new), next to a refurbished collections space (new). More renovations are expected.

Downstairs on most days at the museum, you will find the two staffers who oversaw months of renewal this year: Deputy Director and curator Joseph A. Greene, always dressed for hard work, and assistant curator of collections Adam J. Aja, a stylish young Indiana Jones 2.0.

Aja embodies the sense of adventure in a profession reliant on foreign travel. Over the summer, he worked at the Harvard dig in Ashkelon, Israel, but moved north because of Hamas rocket fire from nearby Gaza.

Greene and Aja are enthusiastic that the physical changes at the museum will make its collections more accessible, especially now that the space is part of a collaborative called the Harvard Museums of Science & Culture. The elevator is the building’s first. The new galleries include a third floor lit by a refurbished Edwardian-era skylight that looks like something out of a Jules Verne novel. New exhibit technologies include wide screens and virtual-reality headsets for visitors.

Museum Director Peter Der Manuelian was hired in 2010 as Harvard’s first Egyptologist in 68 years. He is both an expert on the far past and a champion of futuristic, high-tech ways of studying the ancient world.

He is founding director of the Giza Archives, a project targeting a site of tombs and temples close to 5,000 years old. The project includes interactive features, hosted in collaboration with Dassault Systèmes in Paris, that allow visitors to virtually swoop into old tombs or hover above pyramids.

Objects still predominate, though. About 95 percent of the Harvard collection is in the basement space: shelves of statuary, pottery, shards, Roman glass, plaster casts, cuneiform tablets, urns, and more. One day earlier this fall, Aja was arranging glass-front cabinets donated by the Harvard Art Museums. He pointed to where a reading room for scholars would be, and where a second set of alarmed doors would further secure stored artifacts.

The long-term plan is to have only about 75 percent of the collection in storage, said Manuelian. The rest will fill refurbished gallery spaces that will follow a thematic and geographic logic.

The third floor is given over to ancient Mesopotamia, the second to Egypt, and the first to revolving exhibits. (For now, the museum’s iconic first-floor display, the replica of an Israelite dwelling from the Iron Age, will stay where it is.)

To celebrate the new look, Manuelian, Greene, and Aja tag-teamed for an inaugural humanities lecture earlier this month. The talk reached into the past to reveal what the future will be, and introduced an exhibit that looks at the refurbished space: “From the Nile to the Euphrates: Creating the Harvard Semitic Museum.”

Central to understanding the museum’s past is its first director, David Gordon Lyon (1852-1935). Born in Alabama, educated in Germany, and the first university chair of Assyriology in the United States, Lyon was an energetic scholar of Semitic languages, whose passion was establishing a museum.

“The beginning of this wonderful story goes back to this gentleman,” said Manuelian, who is Phillip J. King Professor of Egyptology. “He was quite a dynamic lecturer and speaker,” and brought with him from Germany the idea of “the seminar principle,” that a good collection accelerates understanding and scholarship.

The joint lecture discussed the persistent and peripatetic Lyon, the shifting fates of the museum building, and the Harvard collection of more than 40,000 Near Eastern artifacts.

A devout Baptist with an appetite for exactitude but with discipline leavened by Southern charm, Lyon taught Hebrew, Assyrian, Syriac, Aramaic, Akkadian, and other languages first set down in cuneiform. For 40 years he collected artifacts, and recorded trips to the Holy Land with deadpan ethnographic photos of ordinary life. “Lyon was a pioneer,” said Greene, a documentarian of what turned out to be the last two decades of the 500-year-old Ottoman Empire, then in decline.

He also wrote obsessively in diaries. There are 38 volumes — one a year — culled from small notebooks that Lyon would transcribe at night. Today, they provide a rare window into the Harvard of a century and more ago.

“This is the real treasure,” said Manuelian of the diaries, “where we got to know the man.” (A project is digitizing and transcribing the volumes.) The handwriting is neat, except for a few pages that Lyon wrote while astride a donkey in Palestine.

The photographs were another treasure, a sober and exact record of things that Lyon saw in the Near East, starting on Christmas Day 1901. Lyon purchased artifacts while traveling, including plaster cast reproductions that Manuelian called “the virtual reality of the day.” (On the museum’s third floor, you’ll find a cast replica of an Assyrian victory stela of King Esarhaddon, purchased by Lyon in Berlin.)

Lyon also had a gift for meeting the right people. Jacob Schiff (1847-1920) was a German-American Jewish banker who funded much of the museum’s construction and collections. Theodore M. Davis, a Newport, R.I. millionaire, gave Harvard objects from his decade of excavations in Egypt’s tomb-rich Valley of the Kings.

“The museum was always conceived as a public museum,” built during an era in which “civic improvement” included enjoying the fruits of a university, said Greene. The present changes in its physical plant will draw in the public anew. “The usefulness of the Museum,” Lyon wrote in 1903, “has just begun,” a sentiment that the museum explicitly embraced and restored.

The building itself, said Greene, “hasn’t changed too much” since 1903. But its place at the University has undergone some dramatic cycles. Lyon encountered hostility to the idea of the museum during the Harvard presidency of A. Lawrence Lowell, who worked to impose a quota on Jews at Harvard and who in 1926 prohibited the museum from raising funds.

During World War II, the military took over a lot of Harvard real estate, including the museum. For the next 40 years it was a shadow of its former self. Collections were packed up and even dispersed. “We’re still looking for some things,” said Greene, who called the postwar doldrums “a near-mortal wound.”

In 1958, the building became what was then a Cold War think tank called the Center for International Affairs, co-founded by a young Henry Kissinger “to solve the problems of the Cold War,” said Greene. In 1970, antiwar activists even set off a bomb there.

The museum’s collections have been back on view, in fractions, for decades. There are grand tablets and casts of archaeology, as well as the more humble regalia of ethnography: vessels, garments, shoes, instruments, and even wood samples. All were intended by Lyon to underscore the German ideal he absorbed in Europe: teaching by way of objects.

During the “journey of revitalization,” begun in earnest only in September, said Aja, some artifacts had to be repaired. For instance, an 800-pound sandstone relief from the Fourth Pylon IV of the Temple of Karnak in Egypt had developed dangerous cracks; cement from a century-old repair had weakened.

The new lobby and elevator, the fresh-looking galleries on the second and third floors are just the beginning touches of what may be a decade or more of modernizing at the museum. The second-floor retrospective exhibit on Lyon will be open at least a year, until funds are raised for a permanent Egyptian gallery.

The museum’s new display of ancient content, said Aja, “celebrates where we come from and heralds where we will go.”