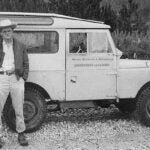 First model for Harvard in Mexico

Heilemann, Halperin make good use of digital in their national political reporting

Reporters John Heilemann and Mark Halperin stand at the crossroads of old school, “What It Takes”-style campaign journalism and the digital era’s insatiable new world order. And, for the most part, they like what they see.

As well they might. The two are best known for their books “Game Change” and “Double Down,” bestsellers that chronicled the surreal, circuslike atmosphere surrounding the 2008 presidential campaigns of Barack Obama, Hillary Clinton, John McCain, and Sarah Palin, and the 2012 contest between Obama and Republican presidential candidate and former Massachusetts governor Mitt Romney, respectively.

The lecture, sponsored by the Shorenstein Center on Media, Politics and Public Policy, commemorates White, a Harvard College student in the 1930s who went on to invent political campaign journalism with his landmark 1960 book, “The Making of the President.”

White was an early planner of the Shorenstein Center. Past honorees include Pulitzer Prize-winning authors Robert Caro and Taylor Branch, as well as Civil Rights leader and U.S. Rep. John Lewis.

Heilemann, M.P.A. ’90, spoke of his optimism about journalism’s digital future. While the Internet has radically transformed the media in both good and bad ways over the last decade, and continues to do so, there are a number of reasons for the media to feel good about its long-term prospects. Among them are recent multimillion-dollar investments in outlets such as Vox Media, BuzzFeed, and Business Insider, which would have been “unthinkable” 10 years ago as the media floundered over how best to adapt to the digital age. Then there are bold predictions by tech legend Marc Andreessen that the news industry could grow 10 to 100 times in size over the next 20 years, and the “intriguing” proliferation of new ventures, such as Politico and ProPublica, along with for-profit and nonprofit legacy outlets that cover politics, major issues, and public affairs.

“We are in a period now of protean experimentation. The period of the destructive part of ‘creative destruction’ is a little bit more in the rearview mirror,” said Heilemann. “And that is good news for the news business.”

Halperin, ’87, a five-cycle survivor of what he dubbed “the freak show” that is presidential campaigning, offered some unsolicited but hard-won advice for 2016 candidates that he believes will best serve them, their campaigns, the media and, most importantly, the nation.

“Be honest about what you believe and why. If you change your mind, be unafraid,” he said. “Slip on your flip-flops, stand tall, be true to your convictions, and trust that the public will appreciate your honesty because, most of the time, they will.”

Halperin urged candidates to be authentic and avoid shifting positions to suit opinion-polling data, as McCain reportedly did in 2008. “Of all the challenges that face … [Hillary] Clinton if she does decide to run, I think this is probably the biggest one,” he said. “Sincerity right now is the biggest trump card in our politics, and if you can come by it honestly, you can [wipe] the field.”

He proposed that campaigns reward responsible and honest-dealing news organizations with access to candidates and inner circles, and punish those that don’t play fair. He urged candidates to reach out to expert beat reporters outside of politics when trying to test policy plans and positions.

“Finally, the fastest and best way to end the freak show is to call it out when your own side shows up to perform.” said Halperin. “Let’s face it, the freak show has had a pretty good uninterrupted run for decades now because the campaigns keep performing it, the media keeps rebroadcasting it, and much of the public keeps applauding it.”

Just prior to the lecture, Heilemann and Halperin commandeered the Allison Dining Room at HKS to broadcast their show for Bloomberg TV, “With All Due Respect.” The program is a crisp, often drily humorous look at what passes for political news of the day — from the “will he/won’t he” speculation around Obama visiting Ferguson, Mo., to a GOP congressional staffer who resigned after insulting the president’s teenage daughters on Facebook.

During the evening, Politico reporter David Rogers was honored as winner of the 2014 David Nyhan Prize for Political Journalism. The prize is named for the late Nyhan, ’62, a longtime Boston Globe columnist and 2001 Shorenstein Fellow best known for his relentless reporting and fierce advocacy for underdogs.

Rogers, a respected shoe-leather reporter who has covered Capitol Hill for 35 years, was both a colleague and an underling of Nyhan’s while they worked at The Globe in the 1970s. Rogers moved on to the Wall St. Journal in 1983 and joined then-upstart Politico in 2008.

“David used to say to me about The Globe: ‘It’s their bulldozer, but we get to drive it,’” said the soft-spoken Rogers, “with an accent on ‘their’ and ‘drive.’”

Heilemann, Halperin, and Rogers followed up the event with a deeper and decidedly less optimistic discussion about the challenges and opportunities facing the news business during the White Seminar on Tuesday morning at HKS. Led by Shorenstein Director Alex Jones, the panel included Kristen Soltis Anderson, a media strategist and 2014 Institute of Politics Fellow, and Jill Abramson, ’76, a former New York Times executive editor and now a visiting lecturer at Harvard.

“I see the trend in political reporting, unfortunately, away from the very detailed, substantive kind of reporting that David Rogers does to basically, and I don’t mean to insult our lecturers of last night, but the prevailing style now is to cover campaigns and politics like a sporting event,” said Abramson. “It’s a battle, constant conflict, juicy behind-the-scenes, colorful scooplets which are — I am the first to admit — delicious, and I read them every morning, but substantive coverage of legislation in Congress isn’t the kind of sexy reading that that is.”

Heilemann conceded that the horse race and personality-focused journalism that has long dominated political reporting is a detriment to understanding substantive issues, but he said the rising popularity of data-driven sites such as Nate Silver’s FiveThirtyEight.com and Vox.com are part of a fresh trend toward niche outlets that deliver substantive policy information, explainer-style.

“My biggest concern now,” said Halperin, “and it’s true at The New York Times for sure, is you’ve got a bunch of younger people — everybody has to do their first stint on the Hill and their first presidential campaign — but I think a preponderance of people at The Times and a lot of people at Politico … are inexperienced and not getting the kind of grounding that is required to eventually be like David Rogers.”