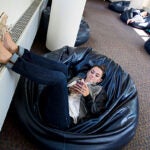 “The existing system in many developing countries is not working for the masses, so almost by definition you need entrepreneurship,” Tarun Khanna said of the social and economic issues facing India, Pakistan, Bangladesh, and other nations of South Asia.

Khanna, the Jorge Paulo Lemann Professor at Harvard Business School and the director of Harvard’s South Asia Institute, leads the Gen Ed course “Contemporary South Asia: Entrepreneurial Solutions to Intractable Social and Economic Problems.” He was speaking just outside Sever 113, where his students were working furiously on plans for improving maternal mortality in one of two places — India’s state of Uttar Pradesh or the Pakistani state of Punjab. A few minutes earlier, they had been presented with two scenarios and a sheet of relevant data, and then given half an hour to brainstorm solutions.

The scenarios weren’t Khanna’s, but those of Sue J. Goldie, the Roger Irving Lee Professor of Public Health and the director of the Global Health Education and Learning Incubator at Harvard. Goldie is one of a handful of co-instructors who have joined Khanna this semester to lend their expertise in key fields.

While Goldie has addressed health issues, the Graduate School of Design’s Rahul Mehrotra has discussed challenges stemming from urbanism; Conor Walsh, an assistant professor of mechanical and biomedical engineering from the School of Engineering and Applied Sciences, has looked at technology; and Parimal Patil, a professor of religion and Indian philosophy and the chair of the Department of South Asian Studies, is in the middle of four weeks of teaching about solutions enabled by the arts and humanities.

“I think it exposes students to wonderfully different voices,” Mehrotra, the chair of the Department of Urban Planning and Design, said of the interdisciplinary approach. “These are critical issues and linked to each other. You can’t talk about public health without talking about urbanization. … One critical question that [recurs] is the lack of capacity of government and other entities to respond.”

Khanna and officials at the South Asia Institute say that the cross-faculty approach of the course reflects the mission of the institute itself.

The South Asia Institute supports Harvard scholarship in the region and fosters collaboration with scholars based there, according to Executive Director Meena Hewett. The institute, which also explores the region for lessons of broader global relevance, has supported the course and publicized it to students, Hewett said.

The development of the four-year-old course has been part of the institute’s broader growth, Khanna said, and filled a gap, shaping a University-wide approach to teaching about South Asia.

After a period of tinkering, the course has hit its stride, he said.

One of the key concepts Khanna wants students to take away is an understanding that though data collection is a crucial part of problem solving, it is not sufficient in itself. Students have to be willing to act on less-than-perfect information, trust themselves and their local partners, and be ready to make adjustments.

“In real life, as entrepreneurs, you don’t have enough data, but you have to act,” Khanna said. “Where is the ‘good enough to act’ point?”

In her four-week portion of the class, Goldie sought to give students background on the region’s health scene before drilling down to nation-specific challenges. She directed students’ attention not to memorizing statistics, but to methods of investigation.

Their job as budding health entrepreneurs, Goldie told students during one class, is to “scan that horizon” for opportunities, looking for institutional voids — a concept coined in 1997 by Khanna and Ross Graham Walker Professor of Business Administration Krishna Palepu — in areas where partner organizations and some infrastructure provide a platform for growth.

“You’re a health entrepreneur,” Goldie urged the students. “You’re action-oriented, you want to do something.”

Partnership, Goldie said later, is key in health settings. She cautioned against narrow thinking and hubris, saying that local partners can provide both resources and the sort of front-line knowledge that often turns out to be decisive.

The course’s health module has been successful enough that an online version has been developed and is being offered via Harvard’s open online course platform, HarvardX. It kicked off Oct. 30 and has more than 10,000 participants.

Back in the bricks-and-mortar classroom, students are required to complete a semester-long project that proposes an entrepreneurial solution to a specific problem and builds a business plan to execute it. Students work in teams that often include peers from different Schools, bringing a range of perspectives to bear. Cherie Ramirez, a staff leader at the Global Health Education and Learning Incubator who has supported Goldie’s health modules for the course, said that the practical focus is a way to boost learning.

“It’s great to have knowledge for its own sake, but you’re [learning as you] try to figure out how to build a business in the basement.”

For Rabiya Mahmood, who is collaborating with two fellow Kennedy School students on her project, the course has provided a chance to explore ways to empower women in Pakistan, work she wants to continue after graduating. For her project, Mahmood is developing a Web-based tool to connect consumers in developed nations with Pakistani tailors.

Mahmood said she has enjoyed the course’s interdisciplinary nature, which has given her a better idea of challenges in important areas.

“It was great to understand the whole health care system,” Mahmood said. “I’m learning a lot.”

Zeenia Framroze, a Harvard College senior from Adams House, ranked the course among her favorites. The focus on the problem-solving aspects of entrepreneurship has resonated with her.

“It’s not just something to make money. That’s important to me and to other people taking the class.”