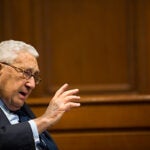 On Sept. 26, Julio Cesar Mondragon, a 22-year-old student at Ayotzinapa Rural Normal School in southwest Mexico, joined a caravan of three commandeered buses in Iguala. About 90 students from the teachers’ college were returning home, and intended to use the buses to get to Mexico City in time for Oct. 2, a date that every year marks the fatal university protests of 1968.

Local police stopped the caravan in Iguala and opened fire. Three students and three bystanders died; 15 were injured; and 43 Ayotzinapa students were captured. No one has seen them since. “They took them alive,” one student said afterward. “I want them back alive.”

At the sound of the first shots, Mondragon fled. His body was found the next morning, his face unrecognizable. Friends identified him by his scarf and shirt. His wife recognized certain moles.

Mexican federal officials now say the 43 students who disappeared were killed by a local drug gang, incinerated in a 14-hour bonfire, and dumped in a local river. (Forensic DNA tests are underway.)

“The brutality of this was huge,” and has to be highlighted to the world, said Miguel Angel Guevara, an M.P.P. candidate at the Harvard Kennedy School. He grew up in Cuernavaca, just a few hours from the scene of the killings. “It reminds me of what the Nazis were doing,” he said.

But unlike the Holocaust’s silent witnesses of seven decades ago, Guevara and other academics are making noise, discussing what may be a six-month blitz of Boston-area events and media outreach. “We felt the story had been underreported,” said Guevara of the missing 43 students — most barely younger than he is. (Guevara, an electrical engineer by training, is 26.)

The project has a pair of YouTube videos up already, on a channel called Boston for Ayotzinapa. One is called “The World Is Watching” and features 136 area students representing 43 countries, one country for each missing student. An Instagram has also appeared, a picture of concerned students demonstrating in front of the gold-domed State House in Boston.

Enrique Cifuentes, who is collaborating with Guevara, grew up in the age of the rotary phone and black-and-white television. He marvels at the vibrant, quick social media of today — nothing like the poverty of information and response that greeted the massacre of university students in the fall of 1968 that he remembers as a boy in Mexico City. “This time is different,” said a hopeful Cifuentes, principal research scientist in the Department of Environmental Health at the Harvard T.H. Chan School of Public Health. “We have the technology we didn’t have in 1968.”

Opening the new information initiative is a panel on the Mexican violence through the lens of public health, set for 3 to 4 p.m. Monday in the seventh-floor conference room at Harvard’s François-Xavier Bagnoud (FXB) Building. Scheduled to participate, via Skype, are Mexican students tracking developments from near where the 43 students disappeared.

“These are 43 people we know,” said Guevara of the disappeared, pointing to evidence of many more. Since 2008, at least 70,000 Mexicans have been killed in the maelstrom of drug wars. In the past eight years, at least 20,000 Mexicans have disappeared; however, Cifuentes equated being gone with being dead. “People do not disappear,” he said. “We are not magicians.”

Also drawing attention to the violence in Mexico are students from elsewhere at Harvard, the Massachusetts Institute of Technology, Boston and Tufts universities, and the Berklee College of Music.

The venue for the panel event, FXB, “is right in the center of human rights and public health” at Harvard, said Cifuentes, an epidemiologist and physician. “It’s quite symbolic” of how the two fields intersect. He recently co-authored a study of youth violence in Mexico, framed as a public health crisis, with Mexico City native Carolina de la Portilla, M.P.H. ’14. It will appear in the March issue of the International Journal of Child Adolescent Health.

Each year, the study said, 1.6 million people are killed by violence worldwide, most of them by “interpersonal violence.” Many more are injured, setting off a cascade of chronic illness and mental health disabilities that burden nations. In 2002, the World Health Organization reported that 85 percent of all homicides occur in the developing world, with Mexico ranked among the most violent countries in Latin America.

“This is not new,” said Guevara of the recent violence against Mexican students. “This is just the most recent case of human rights abuses to catch media attention.”

He mentioned one other. In 2011, during an act of reprisal, the Zetas drug cartel in the northern border state of Coahuila bulldozed the village of Allende. They killed an estimated 300 inhabitants, cut their bodies to pieces, put the remains into steel drums, and set them ablaze with diesel fuel. “This is a kind of parallel reality,” said Cifuentes of how most Mexican citizens have dealt with violence until now. “We keep doing our ordinary life.”

But the disappearance of the Ayotzinapa students, all young and male, have drawn the attention of the United Nations and Human Rights Watch and have set off a storm of social media with hash tags like #ayotzinapa and #43.

The wave of drug killings and disappearances in Mexico match a dramatic spike in murder rates, which doubled between 2008 and 2010 among males aged 15 to 24, said Cifuentes. Nationwide, homicide rates in Mexico nearly tripled between 2007 and 2012. By 2010, “interpersonal violence” was the leading cause of death among Mexicans, male and female, ages 15 to 24.

Guevara pointed to one factor, “asymmetric access to justice,” which he witnessed growing up in the relatively prosperous Mexican state of Morelos. Across the state border in Guerrero, he said, poverty and injustice go hand in hand, and today still prompt floods of workers to seek employment in his boyhood home of Cuernavaca. The killing in Iguala, said Guevara, “is very close to me.”

Cifuentes was close to violence long ago. In 1968, at age 15, he saw the bodies of students being piled into a Mexico City hospital morgue the day after they were shot. “I remember very well Oct. 3,” he said. Today there is a complicating factor, he added: the ubiquitous drug trade, propped up by corrupt politicians, which has created “all this irrationality and greed around quick profits.”

He cited a fear of his, based on the state repression that greeted widespread student protest in 1968. “We might see another such response,” driven by 50 days of protest since the students disappeared, he said. “I think it’s going to be a chain reaction.”

A Mexican student group declared a national strike for Nov. 20, a day that every year celebrates the beginning of the Mexican Revolution. Guevara and Cifuentes plan to keep up a local information drumbeat on the issue of the missing in Mexico.

After all, they said, information, dialogue, and the weight of the world’s attention can lessen the likelihood of repression; can help solve the mystery of the 43 missing students; can widen awareness about parallel violence in all of Latin America; and — on this side of the border — can help educate the English-speaking public.

“We have a shared destiny,” Guevara said of the United States and Mexico. “We grew up together.” That’s all the more reason, he said, to “discuss these ideas and [to offer] these solutions.”