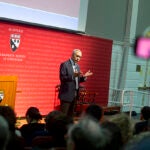 Standing in near-frozen water while guarding a bridge during the notorious Battle of the Bulge in 1945, the infantryman sustained such severe frostbite he almost lost a foot. Evacuated to a hospital in England, he avoided amputation but had serious problems with his feet the rest of his life. When he died in 2008 from a variety of health problems, his widow — who had very little income — applied for a type of benefit for survivors of veterans whose death had resulted, at least in part, from a service-related disability. But a doctor with the U.S. Department of Veteran Affairs (VA) said losing the use of his feet had nothing to do with her husband’s death.

It took nearly six years and a trip to federal court, but with the help of the Harvard Law School (HLS) Veterans Legal Clinic the widow finally prevailed, winning a monthly payment from the VA that completely changes her financial health. While two other VA doctors concurred with the first opinion, the clinic retained two experts of its own who reached the opposite conclusion. Under the guidance of Clinical Professor of Law Daniel Nagin, who founded the clinic in 2012, Christopher Patalano ’14 wrote a winning brief that persuaded the Board of Veterans Appeals that the VA was wrong. Chris Melendez ’15, a veteran of the U.S. Marine Corps, also worked on the case as a summer intern at the clinic.

“I hardly had [any] income. Now I know I have something I can stand on. I’ve got more to live for,” the elderly client said as she thanked the students and Nagin for her victory.

“After knowing that she had fought so hard and so long for these benefits,” said Patalano, “it was an extremely happy day when we received the final decision from the VA.”

In just two years, more than 30 HLS students have enrolled in the Veterans Legal Clinic — housed at the WilmerHale Legal Services Center (LSC) in Jamaica Plain, with Nagin as its faculty director — and represented more than 100 clients in areas of federal and state veterans’ benefits, discharge upgrades, and estate-planning matters. They have landed numerous victories before the U.S. Court of Appeals for Veterans Claims (CAVC) and in veteran-related federal and state agencies, and assisted many more vets in companion programs at the Legal Services Center in such areas as combating predatory student lending, foreclosure defense, family law, and tax law.

Among other victories, they obtained service-connected disability benefits for an Afghanistan war veteran diagnosed with cancer; won a female veteran’s appeal to the CAVC of the VA’s decision to deny her PTSD benefits for military sexual trauma; and successfully represented a veteran in an appeal of a state agency’s decision to deny benefits based on the character of his military discharge. The clinic also offers veterans estate planning under the guidance of Clinical Instructor Tamara Kolz Griffin, an excellent opportunity for students looking to develop their skills outside the courtroom.

In a particularly consequential victory, students represented a combat veteran of the Iraq and Afghanistan wars in his appeal to the CAVC challenging the VA’s denial of benefits for a service-related injury. They persuaded the court to hear the case on its merits in a first-of-its-kind decision that now allows certain veterans returning from combat deployments additional time for to file appeals, and then succeeded in vacating the adverse lower-court decision. As part of its annual educational and outreach campaign, a three-judge panel of the CAVC heard oral arguments in the case in the Ames Courtroom at HLS in the fall of 2013, with clinic students arguing on behalf of the veteran.

“That’s a big decision because it not only helped this client, but provides a new source of legal argument for other veterans whose appeals might otherwise not be allowed to proceed on the merits,” said Nagin.

The clinic’s docket at the CAVC is a part of a partnership with the DAV (Disabled American Veterans) and Chisholm & Kilpatrick, a firm in Rhode Island. The clinic also participates in the Veterans Consortium Pro Bono Program at the CAVC. The clinic’s value is manifold, Nagin said, noting, “It’s a privilege to be able to advocate for someone who’s sacrificed for the nation.”

From an educational standpoint, it provides remarkable opportunities. “The world of VA benefits is extraordinarily complex,” Nagin said. “It’s a labyrinth of statutes and regulation and policies, which is a great teaching environment.” The cases require students to work with medical experts, “providing a rich opportunity to see how the legal and medical frameworks intersect,” he added. It is an excellent training ground for practicing administrative law, and offers students the chance to get into federal court.

Just as important, Nagin said, “We hope we light a flame — if it wasn’t already there — of pro bono commitment to veterans as people go off into their careers.” At least two 3Ls who have worked at the clinic are now looking to devote their careers to representing veterans, he said.