A case for veterans 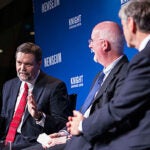 The average week for a typical law school student involves poring over a list of daunting cases and deconstructing complicated arguments. But last week the work of three Harvard Law School (HLS) students included something else: an appearance in federal court.

The students, who are part of the School’s Veterans Legal Clinic, stood before the U.S. Court of Appeals for Veterans Claims last Wednesday to argue for the rights of their client, a decorated U.S. Army veteran.

As part of its annual educational and outreach campaign, a three-judge panel traveled from Washington, D.C., to Harvard’s Ames Courtroom to hear oral arguments in the case of Ausmer v. Shinseki, involving a disabled combat veteran of the Iraq and Afghanistan wars. The case involves the rights of deployed service members who also have benefits claims pending at the U.S. Department of Veterans Affairs (VA).

“The fact that we have a service member here who was deployed, who had some difficulty imposed upon him by that deployment, and allegedly missed the deadline to appeal the VA’s decision, presents the opportunity to argue before the court not just the facts, but the law, and find out what his rights are and establish those rights in the future,” said HLS student Christopher Melendez, who helped argue the case.

Melendez, along with fellow students Bradley Hinshelwood and Juan Arguello, represented Lt. Col. Wilson J. Ausmer Jr., who was recalled to active duty in 2011, after he had filed a claim for disability compensation. The Veterans Board of Appeals decision was delivered to Ausmer’s home while he was stationed in Afghanistan. At issue in the case is whether he missed the deadline by filing the appeal after he returned home.

Ausmer’s legal team argued that there were defects in mailing the decision and that the VA did not consider the challenges Ausmer faced upon returning to civilian life.

“The case really turns on the question of what rules, what appeal deadline should apply when a denial is issued by the VA but the veteran is redeployed,” said Daniel Nagin, a clinical professor of law at HLS who directs the School’s community lawyering program and the Veterans Legal Clinic, which are based at Harvard’s Legal Services Center. Nagin supervised the team of HLS students who worked on the case.

The court, which also heard arguments on Wednesday from VA representatives, will likely issue its ruling on the case in the coming months. It’s a decision that could have far-reaching implications for veterans regularly recalled to active duty.

“One of the hallmarks or signatures of these recent conflicts, in terms of military personnel, is multiple deployments,” said Nagin. “We don’t think our client is the only one grappling with how these appeal deadlines would apply.”

The group Disabled American Veterans has been assisting throughout the proceedings.

To prepare for the case, the HLS students took on the role of lawyers, spending countless hours researching and reviewing previous rulings and writing and filing briefs with the court. Working closely with Nagin and their co-counsel from the law firm Chisholm Chisholm & Kilpatrick, the students also challenged themselves in rigorous moot court sessions.

“You have to be prepared for pretty much anything,” said Hinshelwood, who was tested early when the judges interrupted his opening statement with a barrage of questions. But Hinshelwood stayed calm, carefully responding to each query. In an interview before the session, he said the opportunity to participate in the case was likely “the best practice you can get for actually being a lawyer.”

“So much of the law school education is really oriented around reading case law, thinking about the policy implications of legal rules, or learning those legal rules,” he said. “There really aren’t many opportunities, other than clinics, to apply the stuff you learn in class to actual facts and actual situations. And so to have the opportunity to do that is hugely valuable.”

Melendez, a former Marine, and Hinshelwood, who knew many people who served in the military from his small hometown in Virginia, said working with the Veterans Legal Clinic has inspired them to work on similar issues in the future.

“This will not be the last time that I do veterans work,” said Melendez.

“I’d love to continue to do this kind of work, if not full-time, in some kind of pro bono capacity, because there is a lot of work out there,” said Hinshelwood. “It’s obviously an area of huge need.”

The court was created in 1988 to review decisions on claims handed down by the Veterans Board.

The judges posed for photographs with the students before the proceedings and held a question-and-answer session with the courtroom audience following the oral arguments. They explained that the court started traveling to law schools as part of an educational campaign in 2001. “We want to introduce students to the idea that there is veterans law,” said Chief Judge Bruce E. Kasold.

It is “an area that they can either pursue working at the court, or in private practice or [with] the VA, or potentially as a pro-bono counsel,” added Judge Mary J. Schoelen. “We have a very robust pro bono program before our court.”