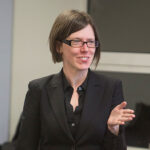 Following a fanfare of brass and welcoming words, the Harvard Art Museums celebrated completion of a six-year restoration this weekend with two days of capacity crowds, as Cambridge neighbors and then the general public swirled through spaces that have been renewed in many senses.

“It gives me a sense of lightness,” said Minga Claggett-Borne. The Cambridgeport resident was looking up at the skylight from the Calderwood Courtyard on Saturday, which had been designated Cambridge Community Day, as bright sunlight lit the airy space. “It’s like an aviary.”

Interspersed with performances by the Radcliffe Pitches, the RP Thompson Jazz Trio, and Harvard VoxJazz, the welcome comments highlighted many other bright spots in the public opening — and in the town-gown collaboration being honored that day.

“We’ve long wanted to break down the barriers, physical and conceptual,” between the University and the city, said Thomas W. Lentz, Elizabeth and John Moors Cabot Director of the Harvard Art Museums. Pointing out the new Prescott Street entrance, which now accompanies the original Quincy Street entrance and reaches out to the city at large, Lentz expressed a wish for the community to take advantage of the new policy of free admission for Cambridge residents. “One of our primary goals,” he noted, is “to strengthen ties with students, neighbors, and anyone interested in lifelong learning.”

“I have no doubt that this space will become a community hub,” said Superintendent of Cambridge Public Schools Jeffrey Young in his opening remarks. He pointed out how students and future teachers alike would be able to utilize the resources of the new structure to the enrichment of all, calling the facility “a place where past, present, and future can come together. He added, jokingly, “Thank you for building this really nice annex to our high school.”

Cambridge residents across the age spectrum seemed to enjoy the community day. “Dani certainly liked it,” said Charlie Mahoney of Cambridgeport, whose 3-year-old son was staring wide-eyed at the impressionist masterpieces in the Wertheim Collection. “It’s great that they’re making such an effort to be a public fixture.”

“I remember the Rothkos,” said Jonathan Fineberg ’67. An art historian, Fineberg’s interest in the paintings began during his undergraduate years. “They were in the Corporation dining room, and the janitor would let me sneak in to see them. I watched them fade.” The exhibition of the Rothkos, whose original rich coloring has been temporarily “re-created” through noninvasive digital projection technology (on display through July 26), helped to win over the initially skeptical Cambridge resident. “Fabulous,” he pronounced it, after several hours in the museum. “The curators just did a wonderful job.”

On Sunday, the wider public assembled for a first visit. Heralded by the chiming of the Memorial Church bells and the Harvard University Band trumpets, visitors who had secured the first batch of free timed tickets (which were offered on a first-come, first-served basis) filed in for more ceremonies.

“Inauguration Theme and Fanfare,” composed by Jerold S. Kayden, Frank Backus Williams Professor of Urban Planning and Design, and performed by the New England Conservatory brass quintet and percussion ensemble, opened the program with brash inspiration, before Lentz once again welcomed visitors to what he called “a fundamental rethinking of what the university art museum should be for the 21st century.” Reflecting on the Fogg Museum’s June 21, 1927, dedication, Lentz also noted that this day would once again reflect the three muses of art, poetry, and music, before announcing the reading, by English Department graduate student David Nee, of Tomas Tranströmer’s poem “Vermeer.”

The poem — with its theme of thoughtful contemplation (“just breathe”) — led naturally to remarks by Harvard Provost Alan M. Garber. “I hope that we will have a chance to slow down, look closely, and see art differently,” he said. Noting the 50 new galleries and public spaces that have been added, Garber expressed the wish that “in this centralized space student and neighbor will meet,” calling for the revitalized museums — which unite the Fogg Museum, the Busch-Reisinger Museum, and the Arthur M. Sackler Museum — to become “a crossroads for our community.”

Violinist Sumire Hirotsuru ’16 delivered a stirring rendition of a Bach partita, showcasing the warm acoustics of the courtyard, before Cambridge City Manager Richard C. Rossi delivered his own comments. Calling himself “just amazed” to have been “able to watch this transformation,” Rossi recalled a final visit to the museums’ previous incarnation, when he noticed signs of wear. More than the technological and architectural improvements, however, he praised “the work that’s been done here to make the museums accessible to the whole community,” calling this effort “a tribute to how we’ve learned to work together.”

Such comments harkened back to the previous day, when Lentz invited the Cambridge community to “come often, linger, wander, and immerse yourself.”

This weekend, that invitation was seized — sometimes in novel ways. “He is loving this wall in the elevator,” said Peter Karol of Central Square. His 14-month-old son, Benjamin, was happily running his hands along the textured stainless steel surface. “He’s really enjoying all the light,” the father added, as they rode again up and down.