A lifetime of scholarship, recognized 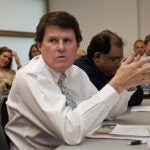 The prestigious award is the highest honor bestowed by the History of Science Society. It recognizes George Sarton, the founder of the journal Isis, and one of the founders of the modern phase in the history of science. The Sarton Medal has been awarded annually since 1955 to an outstanding historian of science selected from the international scholarly community.

“It is, of course, a great honor — which I take to honor the Harvard department as a whole,” Shapin said of the award. “For my part, I was as surprised as I was delighted, not least because I’ve spent all of my working life prior to coming to Harvard 10 years ago in an interdisciplinary ‘science studies’ program and in a Department of Sociology. I’ve never much minded what discipline I belonged to or for what sorts of scholars I was writing, but disciplines, after all, count for a lot. People who dislike my work tend to assign it to some discipline other than theirs, but if I had to live in any one academic place, the history of science would be home and the History of Science Society, founded 100 years ago by Harvard’s George Sarton, is the discipline’s leading society.”

Though best known as the co-author, with Simon Schaffer, of “Leviathan and the Air-Pump: Hobbes, Boyle, and the Experimental Life,” Shapin’s work has long been recognized for promoting serious methodological reassessments of how we understand historical change in science.

Of particular note is Shapin’s restructuring of the way we think about the “big issues” of science — the nature of truth, the role of trust, the emergence of accredited knowledge, representations of scientific identity, and the moral authority that modern science has come to hold.

He was among the first to propose fresh ways of understanding the role of experiment in the sciences by investigating the places and spaces in which experiments took place, the kinds of people who performed them, and the ascription of responsibility for the results though the notions of “invisible technicians,” replicability, and “virtual witnessing.”

Shapin’s other work explored the gradual emergence of what could be called scientific identity — the defining features of a professional scientist as opposed to a natural philosopher. Those same themes are further explored in Shapin’s analysis of the modern scientific vocation, which probes shifts in the patronage and management of science in the 20th century, arguing that personal networks of trust remain as crucial as ever for setting up the relationships and establishing the flows of capital that support science, and that these relationships involve assumptions about integrity that have not been washed away by commercialization.

Shapin also has written extensively about bodily care (or bodily indifference), dietetics, and the embodied life of the savant.

Shapin holds a Ph.D. from the University of Pennsylvania, and has held faculty positions at the University of Edinburgh and the University of California, San Diego; he joined the Harvard faculty in 2004. In addition to “Leviathan and the Air-Pump,” he is the author of “A Social History of Truth,” among other works. He has received numerous honors, including the J.D. Bernal Prize and the Ludwik Fleck Prize of the Society for Social Studies of Science, the Robert K. Merton Book Award of the American Sociological Association, the Herbert Dingle Prize of the British Society for the History of Science, a Guggenheim Fellowship, and a fellowship at the Center for Advanced Study in the Behavioral Sciences.