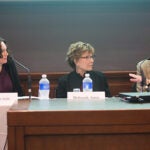 The Islamic State of play

Dallas students expand on Faust's speech, 'The Case for College,' with arguments of their own

DALLAS — Are the expense and effort of attending college still worth it to young Americans struggling through an unsteady economy that often lacks job security? Harvard President Drew Faust has an unqualified answer: Yes.

“Going to college is one of the best decisions you will ever make. In fact, I believe college is more important than ever,” she told them in her speech titled “The Case for College.”

Faust took on the critics of college point by point. “There is no doubt that college pays off financially,” she said. “A wide range of statistics shows the economic advantage of a four-year college education.”

As an investment, a college education has a high rate of return, roughly 15 percent a year, according to a recent study by the Federal Reserve Bank of New York. Over a lifetime, students who graduate from college can expect to make about 60 percent more than those who do not, well over $1 million more than they would otherwise.

During video interviews, students also voiced their support of the importance of a college education.

“There are two things that I am most passionate about and that’s music and mathematics,” said Victor Ragsdale, a senior at Booker T. Washington High School. “I think college is the first time where we really get to question why we think and the way we think, rather than questioning what it is we think.Through college I hope to broaden my understanding, to get that deep knowledge …,” he added.