A watershed on weddings 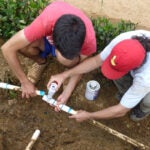 A wellspring of hope

Harvard Overseer and legal scholar Kenji Yoshino ’91, author of “Covering: The Hidden Assault on Our Civil Rights” (Random House, 2006), said he was surprised by the U.S. Supreme Court’s decision Monday to let stand appeals court rulings that in effect allow same-sex marriages to proceed in five states. But he has no doubt about where the issue is headed. He spoke about the case and the issue by phone on Monday afternoon.

GAZETTE: How surprised were you by the court’s decision?

YOSHINO: I was very surprised, because the Supreme Court usually grants review when a federal court of appeals strikes down a state constitutional amendment on the ground that it violates the federal Constitution. So I was actually expecting that the court would review this case. The consequence of them declining the review is, as you know, that five states flipped immediately to having same-sex marriage, and then there are six others that will also quickly flip because they are governed by the courts of appeal whose decisions were left intact … So it’s a big step forward. It takes us from 19 states to 30 states, plus the District of Columbia, with marriage equality.

GAZETTE: For a lot of onlookers, the court appeared to decide by not deciding.

YOSHINO: Yes, even though it didn’t decide, it actually decided a lot for the country. Because taking us from 19 to 30 states is getting across the halfway mark, and that’s one indication of when the Supreme Court is willing to step in and impose something as the law of the land. That is, if you have a supermajority of states, then the court is much more willing to step in and sweep away outliers.

GAZETTE: Public opinion has shifted dramatically in favor of gay marriage in recent years. Does the court watch political trend lines in arriving at its decisions?

YOSHINO: They absolutely do. When was the last time the Supreme Court flipped a supermajority of states on a major social issue?

GAZETTE: Do you think Justice Ruth Bader Ginsburg’s comments about Roe v. Wade — that the court moved too far too fast — have come into play here?

YOSHINO: I do think that’s one of the reasons why they’re proceeding so cautiously and so incrementally. At least the liberals on the court are. I don’t think the supposition is that they’re not going to vote for same-sex marriage as a constitutional right or as being protected by the Constitution when it comes to them. I think what they’re saying is, “We want to do this in a way that makes it stick. So we’re not going to take this until the last possible moment that we can take it.”

GAZETTE: So what happens next? Are we waiting for another court to rule in favor of a ban on same-sex marriage, forcing the Supreme Court’s hand?

YOSHINO: Exactly. When a circuit court of appeals does that — upholds a ban on same-sex marriage as constitutional — then that will create what’s known as a circuit split. … The Supreme Court can do whatever it wants, but the court is almost 99 percent sure to take that case. Because the Constitution can’t differ according to where you live. … And if two courts of penultimate resort have gone in the opposite direction, then people are living under that uncertainty, with no recourse but the Supreme Court. … The Sixth Circuit Court of Appeals is most likely, because they’ve already heard oral arguments in that case, and the judges seemed like they were sympathetic to upholding the ban on same-sex marriage.

GAZETTE: And you’re confident of the eventual outcome?