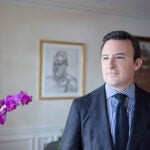 “From the Alps to the Ocean: Maps of the Western Front,” at Pusey Library through Nov. 11, captures the magnitude of the conflict, each map a shard of the shattered mirror reflecting a gruesome war.

Life on the Western Front depended on a labyrinth of trenches quickly and gruelingly dug into battle positions in 1914. Roads, railways, trails, shelters, and ammunition depots sprang up behind the lines, absorbing towns and cities. Small conquests of territory represented big wins — and big losses — in the fight that shaped modern Europe and the Middle East.

The military, social, economic, and political effects of those crucial shifts are highlighted by the maps on display — handmade, one of a kind, or mass-produced. Some were brought home and donated to Harvard by alumni who had served.

Mapmaking advanced more quickly during WWI than in any previous era. Prewar methods, such as relying on known landmarks, were often useless — landmarks could be destroyed or inaccessible. Trench warfare required soldiers to rely on data. Engineers developed sophisticated ways to gather information, recording flashes and booms from enemy cannons to triangulate location, exploiting the photographic potential of air power to create documents that saved lives.

A guide to reading the aerial images points to the challenges presented by tilt, scale, and bomb-cratered terrain. “It’s hard to tell where anything is when everything looks like the moon,” said Bonnie Burns, curator of the exhibit and librarian for geographic information services.

Plenty of WWI-era maps were not for military use; they were communications tools aimed at illustrating to the home front what was happening in strange and faraway places. Newspapers printed thousands. “They were trying to explain why they were fighting — if anybody knew,” Burns said.

A 1914 German map depicts nations straining against borders; a 1918 U.S. map shows Germany as a looming black cloud poised to descend on Europe. Small details like fonts — gothic for German towns, modern for French — hint at the perspective behind the document.

“The maps are amazingly detailed,” said Burns. “As a mapmaker, I wondered how they accomplished that in war conditions with the technology of the time. As a librarian I saw an amazing visual data set I thought researchers would be interested in.” Burns captured the scale and detail of the front in a single map by scanning 300 plans directeurs (detailed maps made by French soldiers), extracting data on trench positions and transposing it on modern road maps.

In her final work, trenches vein across land, a bloody graph of months, years, lives, telling a cartographic story of convulsing cultures and wrenching change.