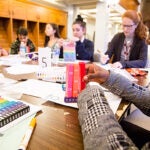 As Halloween nears, be afraid, be very afraid — or at least curious

Clark Schuler finds it funny to tell the story of the Wadsworth House ghost, and not just around Halloween.

“If weird experiences come up in conversations,” said the IT specialist, “or if someone new starts, I like to add my two cents about it.”

Schuler has been at Harvard for more than 20 years, and his work with computers has carried him across the campus. But that night in Wadsworth resonates.

“It was late, maybe 8 or 9 o’clock, wintertime. I was the only one in the building, in the downstairs offices, with the door right behind me,” recalled Schuler. “But I felt like someone was there. And I heard someone clear his throat, and I spun around thinking, ‘How’d you get in here?’ The door was right there. If someone had been standing there, I would’ve bumped right into him.”

Schuler logged off the computer and left the building.

This isn’t the first spooky activity to be reported at Wadsworth House, according to Sam Baltrusis.

Baltrusis spent months investigating paranormal phenomena at Harvard and in Cambridge for his second book, “Ghosts of Cambridge: Haunts of Harvard Square and Beyond.” Buffering lore with history, Baltrusis details how Wadsworth House played a part in the Revolutionary War, and came to be George Washington’s first headquarters. Baltrusis believes that there is ghostly activity at Wadsworth that is residual, or, “a playback or recording of a past event.” (Baltrusis is offering Cambridge Haunts ghost tours Fridays through Sundays through Nov. 1.)

“One account explains that early one morning, 40 years ago, a cleaning lady vacuuming alone in Wadsworth House saw a grim character in a tricorn hat and cloak silently come down the stairs and go out the door,” wrote Drake P. Bennett in a 1997 Crimson article.

Ghosts and hauntings might seem at odds with Harvard’s rational, scientifically minded ethos, but “people seem interested to hear my story,” said Schuler.

Baltrusis, who studied journalism at Boston University, said getting people at Harvard to go on the record with their accounts was difficult.

That’s strange, because when it comes to ghosts, the University doesn’t lack for stories.

It’s the latter Lowell who is purported to linger in the House. Though Amy couldn’t attend Harvard, she spent a lot of her life on campus, and a portrait of her hangs in Lowell House.

Baltrusis claims that some Lowell employees have reported full-bodied apparitions of the poet, and say cigar smoke can be smelled near the painting. Amy smoked thin, hand-rolled cigars.

Lowell House administrator Elizabeth Terry said that was the first she’d heard of Amy Lowell rambling in the House, but that the ghost of former House Master Elliott Perkins seems “well-observed.”

Perkins, a historian, and his wife, Mary Baker-Wilbraham Perkins, served as Masters from 1942 to 1963. Perkins died in 1985 and is still regaled as a beloved figure in House history. So his ghost — according to the attendees at Lowell’s famous Thursday teas in the Master’s residence — is always welcome.

A glowing written portrait of his wife adds to the couple’s enigma. She was “the social overseer of Lowell,” wrote Russell B. Roberts in a 1963 “silhouette” published in the Crimson. “A gainly share of her alluring occult quality probably lies in the fact that Mrs. Perkins is English,” he continued.

“For instance, I believe in ghosts and all kinds of things of that sort, as you know,” she was quoted as saying. “Well, most people here don’t, but they just say, ‘Well, this is interesting; here’s a new kind of person I’ve never met before.’ They’ll forgive all sorts of what are considered peculiarities.”

Harvard philosopher and psychologist William James, the namesake behind the white skyscraper that juts from the center of campus, might be considered a tad peculiar today. He devoted much of his life to proving the existence of the paranormal.

Pulitzer Prize-winning journalist Deborah Blum delved into James’ life for her 2006 book “Ghost Hunters: William James and the Search for Scientific Proof of Life After Death.”

“Most people believe that he really became engaged [with the paranormal] after the death of his baby son, Herman, who died in 1884,” said Blum. That’s how he came to seek the help of the famous medium Leonora Piper — “grudgingly, under an assumed name,” Blum added.

“James came to believe that she knew things about him and his dead child that she couldn’t have known without some supernatural ability,” said Blum. “He visited Piper many times to observe and measure her behavior during trances, and while he didn’t find that she was always perfect, he did continue to find evidence that convinced him that she somehow knew things, often personal, that she shouldn’t have known.”

James studied Piper’s abilities on and off until his death in 1910. During that time, he helped to found the American Society for Psychical Research in New York.

“A lot of his studies involved controlled observations of Piper,” said Blum. “He often sent people to her anonymously and asked them to report on what she told them. One of my favorites of those stories involves a Harvard scientist who gave her a fake name and asked her to tell him what was engraved in a ring that he had received from his mother. She did. He wrote to James in complete bafflement.”

Blum is quick to note that in James’ time, “It was more culturally acceptable for scientists to pursue these kinds of inquiries. And Harvard was very steadfast in supporting him.”

Joining James on his quest was Sir Oliver Lodge, one of the early discoverers of radio waves; Charles Richet, a Nobel-winning scientist known for his work with immunology; and John William Strutt, third Baron Rayleigh, who won the Nobel for his work with atmospheric chemistry.

Harvard’s hulking library sprang to life from tragedy when businessman and bibliophile Harry Elkins Widener died during the sinking of the RMS Titanic. Widener’s mother, Eleanor, established the library in his honor, bequeathing his collection of rare books and, in 1915, a portrait of her son by the French painter Gabriel Ferrier to be housed in the memorial room dedicated to Harry. Fresh flowers are placed there daily.

But in the early 2000s, amid renovation at the library, Widener’s belongings and portraits were removed to make way for the temporary relocation of research services and reference staff.

Barbara Burg was one of those staffers. “During that time, the painting of Widener, which had always hung over the fireplace in the Memorial Room, was removed for cleaning, and the painting was replaced by an unsightly slab of plywood,” she recalled.

“Not long after we moved into the memorial room, a few pieces of plaster dropped from the ceiling onto several of our desks. While nobody was hit on the head by the plaster, it did get our attention. We therefore surmised that Harry Widener’s mother was unhappy that Harry’s portrait wasn’t hanging in the room, so we photocopied a photograph of the portrait and taped it on o the plywood over the fireplace,” Burg said. “After that, there were no other unexplained occurrences that I can remember.”

Believe it — or not

Whether myth or a true brick in Harvard’s historical framework, the University is rife with legends that add to its allure.

Over at Massachusetts Hall, the oldest surviving building on Harvard’s campus, a tale still circulates about the ghost of Holbrook Smith, supposedly a member of the Class of 1914, though no record can be found of him. Known to appear wholly human — except for that walking-through-walls thing — Smith enjoyed amiably chatting up Mass Hall’s student residents until he was told to leave by the onetime Dean of Freshman William C. “Burriss” Young ’55, who lived in the hall for nearly four decades.

In an interview with Harvard Magazine, Young once said that Smith looked at him with “the saddest eyes I’ve ever seen,” before telling Young, “You’ve ruined a perfectly good thing.”

Young was unfazed. He told the magazine: “Eighteenth-century buildings should have ghosts. If there are going to be ghosts, it makes sense they should live in the nicest building in the Yard.”

So, is Harvard haunted? That depends on whom you ask, or if you’re lucky enough — to see.