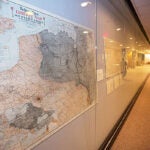 Can you love your neighbor as you punch him in the face? That’s one question posed by “Fight Church,” a documentary that will be screened at 6:30 p.m. Monday during an event hosted by the Science, Religion, and Culture Program at Harvard Divinity School (HDS).

The film, directed by Academy Award-winner Daniel Junge and Bryan Storkel, is about the confluence of Christianity and mixed martial arts. It follows several pastors in a quest to reconcile their faith with a sport that some consider barbaric. HDS reached out to Storkel, who will participate in a Q&A session after the screening, with some questions about the movie and the rise of martial arts ministries.

HDS: The documentary says there are more than 700 fight churches now in the country. When you started working on the project, were you surprised by the number of churches and pastors who participated in MMA fighting? What reasons have you seen for it having caught on?

STORKEL: We found out about it through one pastor, and when we first heard of it, we thought that it was an anomaly and that it didn’t happen anywhere else. However, it turned out that there were a lot more of these pastors. We found a handful of them, but more so we found churches involved in martial arts ministry — from coaching fighters to holding fights at their churches. It was fairly surprising.

I think a lot of people have a problem with the image of the church today, and several folks who feel this way are featured in the film. They believe the church has been “feminized” to a certain extent, and there are not enough manly activities, and that’s why fewer guys go to church. I didn’t see any numbers, but it definitely seems like the fight ministries attract men. There were several women who were participating, but it has brought in more men to the church that wouldn’t have come without this.

HDS: Do you believe the movie speaks to larger issues as well? For example, what do you say to the person who is trying to reconcile faith and war?

STORKEL: The film doesn’t speak directly to war, but it does speak to the mentality of one of the main characters who, in one scene, is shooting guns with his 5-year-old child. He says Christians need to have more of a warrior ethos, and he even goes as far to say that the Crusades were a good thing.

My conclusion was that I don’t think there’s a moral issue with pastors that want to fight. I determined that it is two consenting adults fighting for sport. I still don’t like it, and I don’t want to watch it, but my opinion changed over the course of the film. The positives that come out of it, like training and discipline, are really beneficial. The question I still have is whether the good outweighs the bad.

HDS: You’ve also directed a movie called “Holy Rollers: The True Story of Card Counting Christians.” What interested you about the effort to reconcile faith and what some believe to be sin?

STORKEL: I grew up in a fairly conservative Christian home. There are a lot of aspects of traditional Christianity that I strongly dislike, so I think when I see somebody living outside the box and doing things in a nontraditional way, it’s fascinating to me. Whether I agree with it or not is one thing, but I like to explore those topics and follow people who are going against the grain and not just believing in what they were taught.