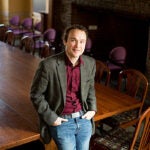 Adam Tanner, now a fellow at Harvard’s Institute for Quantitative Social Science, found in his own private surveillance drama the inspiration for an investigation of consumer-data collection. He talked about the result, “What Stays in Vegas: The World of Personal Data — Lifeblood of Big Business — and the End of Privacy as We Know It,” in an interview ahead of his Sept. 16 appearance at the Harvard Book Store.

GAZETTE: How did the idea for this book come about? What got you interested in the issue of privacy?

TANNER: I started my career reporting from Eastern Europe during the final years before the collapse of communism in 1989. On one day in 1988, 10 East German Stasi agents followed me around to note down what I did on a minute-by-minute basis and to photograph me, something I found out only years later by obtaining my secret police file. Yet they had relatively few insights about me compared to what marketers know about hundreds of millions of consumers today. So I thought it would be interesting to tell the stories about those businesses collecting data about us, how they operate and what impact such practices have on us all.

GAZETTE: How did the compromise of Americans’ privacy happen? Is one sector more at fault than another? Why do you use Las Vegas to illustrate it?

TANNER: The sector of the data economy that has traditionally been the least visible to consumers is data brokers, which include major companies such as Acxiom and Experian. They collect data from many different sources on hundreds of millions of Americans. Some smaller data brokers also compile lists of more sensitive information, such as men who suffer from erectile dysfunction, women who have bought porn or adult products in the last six months, or high school students who are gay. But data gathering has become standard for most businesses. Last spring, I met guitarist Jimmy Page during his visit to Boston. His website asks for your name, address, email, and birthdate just to get beyond the first page.

Vegas is an interesting vantage point because it provides vivid examples of data collection. More people get married in Vegas than other U.S. cities, providing data for public records that are an important component of commercial dossiers. Casinos have made sophisticated use of loyalty programs, which offer rewards in exchange for data. And there is more private video surveillance in casinos than in other private spaces.

In addition, Las Vegas has that great advertising slogan that inspired the title of the book. After the September 2001 attacks, Vegas suffered a downturn in tourism. In response, the town began to advertise itself as an adult playground with the slogan “What Happens Here, Stays Here.” I wanted to explore that promise, to see whether some data could truly stay private in the Internet era.

GAZETTE: What do you hope to accomplish? Are we past the point of no return when it comes to how much of our private information is out there and accessible?

TANNER: I wanted to bring the issue of personal data alive through real-life narrative stories. In the end I would like consumers to understand how data about them is constantly collected and then, in turn, decide how to share information according to the level at which they are comfortable. That means some will share openly and freely, and others will have greater concerns and be more protective of their personal data. Companies should in turn be open about their practices and give consumers a choice.

GAZETTE: How much time did you spend in Vegas, gathering material for this book?

TANNER: I made a series of trips out to Vegas over the course of a year.

GAZETTE: Where else did your research take you?

TANNER: I also visited casinos in Cincinnati and Kansas City to gain insights into smaller regional casinos. I traveled a few times to Silicon Valley to profile tech entrepreneurs, to Texas to meet Kyle Prall, founder of Busted Mugshots, as well as New Orleans, Los Angeles, New York, Washington, D.C., and Chicago. I started thinking about the book as a Nieman Fellow at Harvard. Over the last three years many at Harvard offered valuable help, including at HBS [Harvard Business School], the Law School, and the School of Engineering and Applied Sciences. My most frequently trod path was into the office of Latanya Sweeney, the Harvard professor of government and technology in residence, whose guidance and support were essential to the project.

GAZETTE:In the back of the book, you included a practical guide for people to reclaim some of their privacy on the Internet, on their cell phones, and in social networks. What kind of privacy protocols do you subscribe to and why?

TANNER: I have tried out a lot of privacy-enhancing tools as part of my research. Typically taking control of your data is more cumbersome than doing nothing. Some that I like that are easy to use are WhiteHat Aviator, which allows more private Internet browsing; Disconnect.me, which blocks Internet tracking; and Abine, which has a suite of products, including a service that allows you to generate new email addresses for different companies which then bounce to your real email address.

GAZETTE:What’s one takeaway our readers should know about their privacy?

TANNER: It’s up to every consumer to decide what information he or she wants to share, so everyone needs to think before clicking. Once personal data is out there, it never disappears.