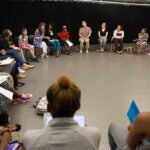 When he was in high school, Ozdemir Vayisoglu ’16 dug into the past, uncovering buried secrets at an archeological site in his native Turkey. This summer, he was digging again. But instead of carefully sifting through dirt thousands of miles away, he was poring over archives at Harvard’s Semitic Museum.

Working with its director, Peter Der Manuelian, Vayisoglu helped research and develop an exhibit that examines the museum’s founding in 1903 by Professor David Gordon Lyon.

“We really want to recapture [Lyon’s] vision in creating this museum,” said Vayisoglu, an economics concentrator from Eliot House who also loves history, archaeology, and museum studies. “He saw this museum as an educational tool.”

Egyptian stelae, cuneiform tablets, Israelite figurines, Roman glass, historic travel photos, and ethnographic objects from the Middle East all will be part of the vivid exhibit set to open this fall.

For 10 weeks, Vayisoglu scoured Lyon’s diary entries and the registration cards of museum objects to help develop themes for the display and the exhibit’s accompanying text. “His diaries were amazing. It was like digging up the past in the archives. It was just a different kind of excavation … you never know what you are going to find out.”

Vayisoglu is one of 11 Harvard undergraduates who worked closely with Harvard faculty and administrators this summer as part of the Summer Humanities and Arts Research Program (SHARP). Sponsored by the Office of Undergraduate Research and Fellowships, SHARP, now in its second year, connects students seeking research opportunities in the arts and humanities with Harvard scholars and experts looking for help.

The initiative is the latest addition to the summertime undergraduate research program, which began nine years ago with the Harvard College Program for Research in Science and Engineering. The Harvard College Behavioral Laboratory in the Social Sciences soon followed, along with the Program for Research in Markets and Organizations, in collaboration with Harvard Business School.

Adding a humanities and arts component to the summer research programs has long been a goal for its administrators. Harvard faculty members have also been eager to get involved. The number of SHARP research partnerships more than doubled since the program began last year. This summer, students researched primitive navigation techniques for a Science Center exhibit in December organized by the Harvard Museums of Science & Culture, and worked with the Peabody Essex Museum to explore how visitors engage with the museum. The students studied African musicians, the legacy of World War I, and folklore.

“Focus was the great gift of the SHARP Program,” wrote Maria Tatar in an email. Harvard’s John L. Loeb Professor of Germanic Languages and Literatures and of Folklore and Mythology researched African-American folktales with help from undergraduates Ali Zimmerman ’15 and Rebecca Panovka ’16. “The three of us were able to live and breathe the air of the research program, and weekly meetings gave us the chance to exchange information, ideas, discoveries, and obsessions. … It did not take long for us to reach the point where we felt collectively that this was the richest and most intellectually rewarding work we had ever done.”

Since 2005, more than 1,000 students have taken part in the competitive research programs that allow busy Harvard undergraduates to focus on one research project free of other obligations and demanding class schedules. The work is a perfect primer on the rigors of steady, self-directed academic research. For some students, that flexibility proves challenging.

Zimmerman, who spent much of her summer online researching how the “The Frog Prince” evolved from a Brothers Grimm fairytale to a reworked Disney film, as well as the evolution of the “Tar-Baby” story, based on a character from the Uncle Remus stories by Joel Chandler Harris, said she experienced a type of “culture shock” with SHARP. When school is in session, “You have to balance four classes, extracurriculars, make time to eat,” said Zimmerman who also works during the semester. This schedule “has been a shift for me,” she added, “and my biggest challenge.”

Working so closely with a Harvard expert seeking input and feedback also took some getting used to. Initially, Zimmerman found herself a little overwhelmed to “be in the room with the person who wrote the book and have her say, ‘Well, what do you think about this?’ And you’re like ‘What do you mean, what do I think? What do you think? That’s what matters.’”

But Tatar’s inclusive style put the rising senior at ease. “She was so welcoming and generous with her time and thoughts and really considering of what you have to say,” said Zimmerman.

Students also learn from each other. Each year the undergraduates live and socialize in “the research village,” more commonly known as Mather House, and the Dudley House dining hall. The area transforms into a living laboratory where friendships and the exchange of ideas flourish between young scientists and sociologists, authors, and engineers.

“The key to what happens in the house environment is the fellows themselves,” said Greg Llacer, director of the Office of Undergraduate Research and Fellowships. “We really emphasize that the cohort drives their own identity, and they drive it through their own interactions.”

Those interactions extended beyond campus, with trips to the Arnold Arboretum, Tanglewood, and a local chocolate factory, among other outings. Llacer recalled two students comparing their areas of research on a visit to Fenway Park. “To me that was a success story beyond my wildest imagination … they are talking about their intellectual interests, no matter where they are.”

The program also organized weekly discussions for the budding scholars, such as a public speaking primer for researchers, and a research integrity training session, as well talks in specific research fields. This summer SHARP attendees met with several Harvard luminaries including the authors Louis Menand, the Anne T. and Robert M. Bass Professor of English; Jill Lepore, the David Woods Kemper ’41 Professor of American History; and Diana Sorensen, dean of arts and humanities and James F. Rothenberg Professor of Romance Languages and Literatures and of Comparative Literature.

“They are really getting the top people in the field to come talk to us in a very intimate setting,” said Rachel Gibian ’15, a religion and literature concentrator who engaged her passion for the stage during her summer research work. Gibian joined forces with Tim McCarthy, Harvard lecturer on history and literature and on public policy, helping him research and craft a play titled “Four Harriets” about prominent female abolitionists during the Civil War. The play will premiere at the American Repertory Theater this season as part of a series of Civil War-themed productions. Gibian also trolled the Schlesinger and Houghton libraries looking for information that would help McCarthy with a spring course he is developing in tandem with the series.

Gibian said her summer experience lived up to the finding of the 2009 Harvard Arts Task Force that encouraged a greater emphasis on art-making in the undergraduate curriculum.

“This seemed like a great way to bring art-making in to academic research. So yes, you are spending hours and hours at Houghton and Schlesinger library … but the end result is a play and the research question you are asking is ‘What would Harriet Beecher Stowe say to Harriet Tubman?’ … ‘How do we make these characters come alive?’”