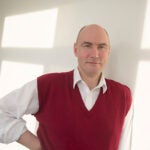 Tomorrow isn’t such a long time

If there’s one thing nearly all modern technology has in common, it’s heat. Whether it’s your car, computer, television, or even refrigerator, they all generate large amounts of heat. And nearly all of it goes to waste.

In an effort to recapture some of that energy and transform it into electricity, a team of researchers has developed computer simulations for a new type of meta-material that would have the ability to control heat and electrical current independently. Their work is described in a recently published paper in Physical Review X.

The team included Yuki Sato, a fellow at the Rowland Institute at Harvard, and Salvatore Savo, a postdoctoral fellow at the institute, along with Massimo Moccia, Giuseppe Castaldi, and Vincenzo Galdi at the University of Sannio in Italy.

“No one has ever been able to show an example where electrical current and heat can be independently controlled,” Savo said. “This is really proof of that principle.”

The hope, Savo said, is that the system could help increase the efficiency of thermoelectric generators, which can capture the excess heat produced by devices such as computers and use it to generate electricity.

Currently, the conversion efficiency of such generators is limited. With improvements in materials that can separate heat and electrical current, Savo said, the devices may one day generate enough electricity to power other devices, or even entire homes.

To develop a system for separate control of heat and current, researchers relied on “coordinate transformation,” a theory most often associated with attempts to create meta-materials with the ability to render objects invisible.

Such materials work by working with light like it was a constantly flowing river. Meta-materials, Sato said, act like channels, directing the flow of light around an object, essentially rendering it invisible to an outside observer.

Using similar principles, Sato, Savo, and their colleagues were able to create a model with the ability to bend electrical current around an object while simultaneously pulling heat toward the same object.

The model described in the paper uses a carbon fiber and graphite substrate studded with thousands of “inclusions,” tiny elliptical areas made from aluminum nitride and silver conductive epoxy, each of which has different properties. Aluminum nitride conducts heat but not electricity, while the reverse is true for silver.

“By using two materials with distinct properties, we create a preferential path for current, and a separate path for heat,” Savo explained. “Those paths are made of different materials such that the electricity is directed to go around a cylindrical object, and the heat is drawn towards it.”

Savo was optimistic that meta-materials like those described in the paper will help make more efficient generators a reality, someday as a standard piece of technology in homes.

“These generators exist today, but before they can be competitive, we need to increase their ability to convert heat to electricity,” he said. “Almost every machine we use wastes heat. Today, that energy is simply wasted. It dissipates into the environment. But down the road, we have a vision in which these generators can take that heat and put it to good use.”