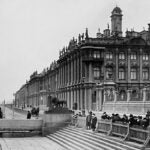 In 1904, a kind of lightning struck London’s theater scene. Tuxedo-clad audiences accustomed to somber and serious dramas were stunned by a production set in a whimsical world of make-believe, starring a band of rambunctious children.

One well-known actor and producer, after reading an early version of the shocking new play, became convinced its creator had lost his mind.

But Scottish playwright J.M. Barrie was perfectly sane when he introduced his land of crocodiles, fairies, pirates, and an ageless, mischievous, flying boy named Peter Pan to the London stage. And theatergoers loved it.

Contemporary audiences will have the chance to experience some of that wonder this summer when the American Repertory Theater (A.R.T.) recaptures the spirit of the boy who would never grow up in its premiere of “Finding Neverland.” The new musical, about the real-life genesis of Barrie’s groundbreaking work, runs from July 23 through Sept. 28.

Helmed by A.R.T. Artistic Director Diane Paulus, the musical is based on the 2004 film of the same name, which starred Johnny Depp as the free-spirited Barrie and Kate Winslet as Sylvia Llewelyn Davies, the mother of four young boys whom Barrie befriends and draws on for inspiration. While visiting London’s Kensington Gardens, Barrie encounters the clan. Soon they are regular playmates, enacting the author’s imaginary scenarios in vivid detail. (In real life, Barrie became a trustee and guardian to the boys after their parents died.)

For Paulus, who is known for staging productions that burst the bounds of conventional theater, the show was a natural fit. Paulus sees Barrie as a kindred spirit, an artist willing to take chances and break the rules “for great things to happen.”

“I loved the behind-the-scenes aspect of this story, what it takes to create something really transformational,” said Paulus. “That appealed to me … that artistic risk-taking.”

Movie mogul Harvey Weinstein, the former head of Miramax studios, which produced the 2004 film, is backing the project, which includes a script by James Graham, music by singer-songwriters Gary Barlow and Eliot Kennedy, and choreography by Mia Michaels. Paulus and Weinstein first connected two years ago during his visit to Cambridge to see her A.R.T. revival of the musical “Pippin.” When he mentioned he was working on making a musical from “Finding Neverland,” Paulus watched the movie again and was hooked.

But transforming a film into a stage musical is a delicate process. A 2012 attempt at adapting “Neverland” in England met with mixed reviews. Not every movie can succeed in such a makeover, explained Paulus on a recent afternoon in her A.R.T. office. The woman behind productions such as “The Donkey Show,” the disco revamp of Shakespeare’s “A Midsummer Night’s Dream” that has been a hit in Cambridge for years, and who won a Tony Award for best director in 2013 for her reimagined “Pippin,” appreciates the value of song. But she also appreciates when to use it.

“A film can become a musical if you can see a place where a musical can express something more than the film can,” Paulus said. With “Finding Neverland,” Paulus’ way in was through Barrie’s vivid imagination, something she felt could be animated and expanded “through musical storytelling.”

“That was my hook into it, no pun intended.”

The show’s songs by Barlow, lead vocalist for the British pop group “Take That,” and Kennedy evoke the “1960s British pop world, ‘Yellow Submarine’-esque sounding kind of fantasy songs,” said Paulus, and are a “keyhole” into Barrie’s mind. They are also infectious. When Paulus played some of the tunes for her 7- and 10-year-old daughters last year, they “went crazy dancing all around the house.”

Barrie’s imagination was also the hook (pun intended) for young playwright Graham. Best known for his plays about Great Britain’s political machinations, Graham was tapped by Weinstein after the producer attended a production of his recent political hit “This House.” They met one morning for breakfast. Not long after, Weinstein got in touch.

Like Paulus, Graham was intrigued by the idea of letting Barrie’s inner child and imagination run wild on stage. “The thing I really pitched hard for was to bring a sense of childish naughtiness and silliness to the theater version … how you theatricalize that magic was really exciting.”

To do that, Graham transformed some of the smaller moments in the film into large production numbers, unleashing Barrie’s fantasy world with the help of Barlow and Kennedy’s evocative music and Michaels’ creative choreography.

“You take little ideas that are only fleeting in the film, and you expand upon them, and you find the theatrical language to do that,” said Graham, whose newly reworked dinner scene, among others, is sure to be a crowd favorite.

In a sneak peek at what’s to come, Oscar-winner Jennifer Hudson, clad in a silver sequined gown and surrounded by the four youngest members of the A.R.T. cast, gave a moving performance of the show’s title song “Neverland” during the 68th Tony Awards last month. Last week, sneakers and shorts were the preferred attire for Jeremy Jordon, a Broadway regular who plays Barrie and who delivered his own stirring version of the song during a rehearsal at Farkas Hall.

Hudson’s Tony performance fueled industry speculation that the musical may eventually reach Broadway. Asked about the show’s future, Paulus said that for now she is “100 percent focused on making a show for the A.R.T.”

But, she added, “Like everything, should it have a future life, that’s just the happy moment when you get to do it again.”

“Finding Neverland” is presented by the A.R.T. by special arrangement with Harvey Weinstein.For ticket information, visit the A.R.T. website.