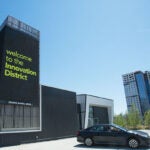 Harvard has been entwined with the American military since its start. In 1775, Gen. George Washington quartered the first Continental Army in Harvard Yard. On April 19 that year, British troops retreating from Concord and Lexington killed a graduate of the College, the first to die in combat, near present-day Porter Square.

This week, Harvard is entwined once more as it hosts a weeklong pilot program presented by the Warrior-Scholar Project. The nonprofit group, started at Yale University three years ago, organizes academic boot camps for veterans thinking of making a transition from the military to college. This summer, the program — intended for former enlisted personnel only — is also debuting at the University of Michigan.

Why Harvard? “It was the next logical move for us, expanding from Yale,” said co-founder Christopher Howell. He said the move was also eased by support in Cambridge from Jesse Reising, a student at Harvard Law School, and Lowry Pressly, a Ph.D. student in the Graduate School of Arts and Sciences.

Howell is a former Australian special forces soldier and an Afghanistan veteran who graduated from Yale this spring with a degree in humanities. Five years from now, “We aim to be the national model for educating veterans,” he said of the Warrior-Scholar program. “We really think we’ve hit on something here that is expandable and transferable.”

For now, that model will involve short-term boot camps for veterans with an eye on attending college. “We very much take a cautious approach to our expansion,” said Howell. “This was our first expansion beyond one campus,” though as many as 10 other universities are looking at the program. Warrior-Scholar sessions usually last two weeks and enroll 30 students. Harvard’s pilot program will last a week and includes 14 students.

This morning, Harvey C. Mansfield Jr., the William R. Kenan Jr. Professor of Government, introduced the students to the two works he considers seminal to understanding American politics: “The Federalist: or, the New Constitution” (1788) by Alexander Hamilton, James Madison, and John Jay, and “Democracy in America” (1835, 1840) by Alexis de Tocqueville, which he co-translated for a 2000 edition.

Leading a seminar later this week will be James H. Waldo, the Gordon McKay Professor of the Practice of Computer Science and Harvard’s chief technical officer. Guest speakers have already included Latanya Sweeney A.L.B. ’96, professor of government and technology in residence. Two Harvard writing instructors are teaching workshops all week.

Every evening includes dinner discussions. “It’s critical to us,” said Howell. “The academic stuff is only one aspect of this program. The social and emotional aspects are as vital.” Warrior-Scholar staff members, he added, evaluate “every student, every day” for signs of progress and readiness for college life.

On hand to greet the Warrior-Scholar students this morning was Harvard President Drew Faust, a historian of the Civil War who has worked to bridge the civilian-military divide. Seated at the head of a square of tables, she recalled a commencement speech that Admiral Michael Mullen gave at West Point three years ago while chairman of the Joint Chiefs of Staff. Americans are proud of their military, but so few are part of it, she remembered him saying, that, “I fear they do not understand us.”

Faust said, “It is imperative there not be this separation.”

Programs like the Warrior-Scholar Project will help put veterans in direct contact with civilian counterparts in a university setting, she said. “There are some important lessons in the combination of the warrior-scholar,” Faust said, including discipline, leadership, teamwork, and selflessness. “You have such important messages and lessons to bring.”

She said the new program provided “a chance for me to express my enthusiasm and my support for the path you have taken, and the commitment you are exhibiting to higher education.”

Faust also recalled remarks made at a 2009 ROTC commissioning ceremony by Gen. David Petraeus, who also is interested in the concept of the soldier-scholar. “The most powerful tool any soldier carries,” she remembered him saying, “is not his weapon but his mind.”

Faust’s presidency has re-established relations with the military, which frayed decades ago during the protests against the Vietnam War. Direct ties with the Reserve Officers’ Training Corps were renewed in 2011, and ROTC commissioning ceremonies are once again a part of Commencement Week.

“You have so much to offer,” said Faust to the veterans. “As we seek to teach you, I hope you will also teach us, and teach your fellow students and all members of the community what it’s meant to serve, what your lives have been like, what the military has been like, and how important it is to understand that.”

She thanked HLS Dean Martha Minow for hosting the event and director Logan Leslie ’15/’16, an eight-year veteran and former Special Forces soldier. The economics concentrator, married and the father of two, plans to graduate early.

Howell said the warrior-scholar concept was born in part in Sydney, where he went to college after nine years in the military, and during his time as a counter-terrorism operative. “You can kick in a door,” his brother David told him, offering to help get Howell ready for college, “but you need to learn to read and write academically.”

Six months of reading and writing assignments from his sibling, an academic, said Howell, “allowed me to transition very effectively” from one world to the next.

After transferring to Yale through the Eli Whitney Student Program, he majored in humanities, with a focus on intellectual history. “I figured I had enough practical experience in my life,” said Howell. “I wanted the loftiest, most theoretical degree I could find.”