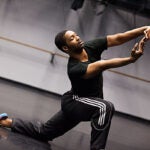 For the third consecutive year, theater productions with strong ties to Harvard won a range of honors at the Tony Awards.

“All the Way,” a searching look at President Lyndon B. Johnson’s first year in office, won the award for best play on Sunday night at Radio City Musical Hall. The play also earned a best actor Tony for Bryan Cranston, who transitioned from his Emmy-winning run as chemistry teacher turned drug dealer Walter White in the hit series “Breaking Bad” to portray the nation’s 36th president onstage. “All the Way” opened the American Repertory Theater’s 2013-2014 season last fall and was directed by Bill Rauch ’84.

“We were thrilled to see ‘All the Way’ win the Tony for best play and Bryan Cranston win best actor for his incredible performance,” said A.R.T. artistic director Diane Paulus. “We are so proud that work we originated at our home at Harvard went on to find success with a wider audience.”

Up on stage, Rauch kept his arm tightly around Paulus, his longtime friend, as producer Jeffrey Richards and Pulitzer Prize-winning playwright Robert Schenkkan accepted the award for “All the Way.”

Speaking by phone Tuesday from his home in Ashland, Ore., after a whirlwind trip to New York City, the artistic director of the Oregon Shakespeare Festival recalled his time as a Harvard undergraduate working with the nascent A.R.T., and what it meant to bring his professional production back to Cambridge.

“It was so moving to be back on the Harvard campus and to be doing the show at the Loeb Drama Center where I really cut my teeth as a director … it was so powerful to be working at the A.R.T., a company that had shaped me so much as a young artist,” said Rauch, who directed 26 shows while on campus, met his husband while in college, and later formed the Cornerstone Theater Company in Los Angeles with several friends from Harvard.

Rauch said he and the show’s producers chose to stage “All the Way” at the A.R.T. “largely because of our huge respect for Diane Paulus’ leadership.”

“I love that we got to do “All the Way” at the A.R.T.” Rauch added, “and of course that we’ve had the success on Broadway. I couldn’t be happier.”

When it came to casting the lead, Rauch and the play’s artistic team set their sights on Cranston, in part because of his name recognition, but also because of his “incredible depth as an actor.” Cranston, said Rauch, brought vulnerability, ferocity, and an incredible physicality to the role.

“I was amazed by what a physical actor Bryan is. He made a lot of strong choices physically about LBJ that I think really led to a lot of the energy and the excitement about his performance. … It’s really quite remarkable. He really transforms his body when he’s LBJ. He becomes heavier; he becomes taller. It’s quite astonishing.”

In 2012, the best musical Tony went to “Once,” directed by Tiffany and workshopped at the A.R.T. before it headed to Broadway. That same year Paulus’ fresh take on the 1935 opera “Porgy and Bess,” with music by legendary composer George Gershwin and lyrics by his brother Ira and author DuBose Heyward, earned an award for best musical revival as well as a best actress Tony. The two shows took home 10 awards in total.

Sunday evening also included a sneak peek at what’s in store for an upcoming production at the A.R.T. Singer Jennifer Hudson performed “Neverland” from the musical “Finding Neverland.” Based on the film of the same name, the show tells the tale of playwright J.M. Barrie’s relationship with the family that inspired him to create “Peter Pan.” “Finding Neverland,” presented at the A.R.T. by special agreement with producer Harvey Weinstein, opens on July 23 and runs through Sept. 28.