Summertime, and the reading is easy 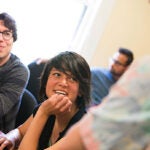 Faculty members outline what they’ll be perusing during their downtime

This summer I’m going to read W.B. Yeats and Elizabeth Bishop, and “Wynne’s War,” a new novel by Aaron Gwyn about special forces on horseback in Afghanistan. I’ll also read a collection of essays by Italo Calvino and stories by Mark Chiusano, a former student who graduated so recently that I still expect to see him in the Barker Center halls. I’m also starting to wade into a couple of new projects, which will require ample research on picking locks, chupacabras, cults, and the 1993 tragedy at the Koresh compound in Waco, Texas. I’m looking forward to all of this reading.

And I’m also thrilled about the reading that isn’t yet planned. I’m eager to happen upon unexpected used bookstores, tag sales, and library fundraisers, where I often buy books outside of my typical reading inclinations. In those places, where books are spilling out of moldy and collapsing cardboard boxes, I trust serendipity. A lawn mower repair manual? A cookbook from the 1950s? A self-published account of a man’s quest to earn a place on the PGA Tour despite having only started playing golf the year before? I’ll read these with almost the same delight and concentration that I do serious literature, and they will usually deliver what I long for as a reader — interesting language, complex character and vivid details, and surprise. There is often a good story to be found in such texts. Maybe it’s already on the page, or maybe it’s an idea still waiting to be written.

One of the things I enjoy most about my area of research, the history of the British Empire, is that it gives me a chance to travel around the world. And one of the things I enjoy most about travel is reading about the places I visit. This year I have been on leave and traveling more than usual, so I am looking forward to a quiet summer in which I can catch up on a few titles I didn’t get to while on the road.

I recently visited South Africa for the first time, and want to read Nadine Gordimer’s novel “July’s People.”I’ll be curious to see how her fictional portrayal of a post-apartheid régime — which was banned in South Africa when it was published in 1981 — holds up now, as South Africa marks 20 years of multiracial democracy. Closer to home, I took advantage of a conference in Oxford, Miss., to visit William Faulkner’s house Rowan Oak. I haven’t read any Faulkner since I was blown away by “The Sound and the Fury” in high school, so “Light in August” is high on my summer reading stack.

I’m especially interested to read Faulkner after having spent a lot of time lately with one of the writers who inspired him, Joseph Conrad, the subject of my current research. Before he became a writer, Conrad spent 20 years as a merchant sailor. And in order to get a sense of his life at sea, I spent a month this winter sailing from Hong Kong to Southampton on a container ship. I’m fascinated by accounts of shipboard life, so I can’t wait to read Geoff Dyer’s new book, “Another Great Day at Sea,” about his stint aboard the aircraft carrier USS George H.W. Bush. Geoff is one of the funniest, smartest writers I know, and this is sure to be a perceptive and entertaining treat.

I have a soft spot for science fiction, speculative fiction, or whatever it’s called now. With few exceptions, this area has historically not featured many minority voices. So I’ve been especially excited to see a new wave of work in this vein by authors of color, a generation or two younger than the influential masters Octavia Butler and Samuel Delany. I have a couple of anthologies on my summer pile: “So Long Been Dreaming: Postcolonial Science Fiction & Fantasy,” edited by Nalo Hopkinson and Uppinder Mehan, and “Long Hidden: Speculative Fiction from the Margins of History,” edited by Daniel José Older and Rose Fox.

As for nonfiction, I will be glad to finally have time to finish my friend Vivek Bald’s book “Bengali Harlem and the Lost Histories of South Asian America.” Also in that queue are Saidiya Hartman’s “Lose Your Mother: A Journey Along the Atlantic Slave Route,” Gaiutra Bahadur’s “Coolie Woman: The Odyssey of Indenture,” Tommie Shelby’s “We Who Are Dark,” and Kiese Laymon’s “How to Slowly Kill Yourself and Others in America.” None of these seem like light summer fare, maybe, but I’m just glad to have time to take a bite out of a few of these books that have been on my mind for a while.

I’m intrigued by Rana Dasgupta’s new book “Capital,” a chronicle of the new bourgeoisie of Calcutta. He’s a brilliant, lyrical writer who can be politically scathing, too. Meanwhile, I foolishly joined a Facebook group of progressive scholars critically engaging with Thomas Piketty’s megahit, “Capital in the Twenty-First Century.” While I’m at it, maybe I’ll reread “Das Kapital” and make it a trifecta.

I have high hopes to make it through any of the above. Of course, I might just binge-watch “Cosmos” and BBC Sherlock Holmes episodes.

It’s time to push ahead in some areas and clean up others. On the cleanup front, I was mesmerized several years ago by Stephen Greenblatt’s “The Swerve” and vowed to read “On the Nature of Things” by Lucretius, the poem that inspired him. The prose edition by Martin Ferguson Smith, which Greenblatt read one summer in college, is on my reading list, and I hope to be as moved by Lucretius as was Greenblatt (and as I was by Greenblatt).

I’ve gotten a bit behind. Junot Diaz’s “This Is How You Lose Her”and “The Amazing Adventures of Kavalier and Clay” by Michael Chabon are unopened files on my iPad. Larry Katz, professor of economics and my companion of several decades, has already read them, and thus I cannot depend on him to read them to me, as he has so many other books. Simon Schama’s “The Story of the Jews” will be our read-out-loud book for the summer. Schama’s “Citizens” taught me almost everything I know about the French Revolution. Will he do the same for the Jews?

Katz and I have also decided to set aside some time to learn [the programming language] Python through an MIT online course you can do at your own speed. Is that summer reading? I’ll know in September.

Thomas Piketty’s “Capital in the Twenty-First Century” is first up; it’s a tome that requires some time. Perfect for summer.

Health care gets its share of pages, though not of the self-help variety. Dan Lieberman’s “The Story of the Human Body” is on my nightstand, and Nicholas Wade’s “A Troublesome Inheritance: Genes, Race, and Human History” is soon to arrive. I read Angus Deaton’s “The Great Escape: Health, Wealth, and the Origins of Inequality” this winter, and the three of those books make a wonderful grouping.

I’m looking forward to Natasha Dow Schüll’s “Addiction by Design: Machine Gambling in Las Vegas.” Las Vegas epitomizes so much of America, and I get to understand health behaviors to boot.

“Tom Sawyer” and “Huckleberry Finn” are on my fiction reading list. I read to my 8- and 10-year-old daughters before bed, and we’ll have a good time with them.