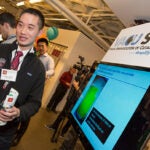 Meredith Weenick ’90, M.B.A. ’02, a seasoned administrator with significant operational experience in the nonprofit and public sectors, has been named vice president for campus services at Harvard University.

“Managing the daily operations of an institution as large as Harvard while pursuing a strategic vision that supports its teaching and research mission requires a leader to maintain a delicate balance,” said Executive Vice President Katherine N. Lapp. “The skills that Meredith has honed with the city of Boston and several service-oriented organizations will be a tremendous asset to the University.”

Weenick joined the city of Boston in 2002 as an HBS Leadership Fellow. She served for five years as a policy adviser to former Mayor Thomas M. Menino, working on citywide policy implementation in the areas of budget, finance, and performance management. In 2010, she became the city’s chief financial officer, overseeing its $2.6 billion operating budget and $1.8 billion capital budget, as well as its debt and investment management, financial auditing and reporting, and risk management. As a member of the mayor’s cabinet, she played a strategic role in organizational management and policy development.

Prior to joining the city, Weenick spent more than 10 years in management positions in community service and workforce development, including service as the director of operations at City Year Boston and the deputy director of the Massachusetts Service Alliance, where she was responsible for the daily operations of the Massachusetts Governor’s Commission on National and Community Service.

At Harvard, Weenick will assume responsibility for a department comprised of 1,600 employees and a wide portfolio that covers most of the critical operations of the campus, as well as such major University initiatives as the development of the Smith Campus Center and the Common Spaces program.

“As an alumna of both the College and the Business School, I feel a tremendous connection to Harvard, which inspired me to public service and has had an immeasurable effect on my career,” Weenick said. “I am thrilled to have the opportunity to direct the team responsible for the day-to-day operations of the institution.”

The vice president for campus services reports to the executive vice president and oversees a multifaceted group of operating service departments, including facilities services and property management, sustainability services, real estate management (both residential and commercial), dining and hospitality, event planning, engineering and utilities, transportation and parking, global support services and international student services, environmental health and safety, emergency management, and the campus service center.  She will begin her duties at Harvard on July 14.

Weenick lives in Boston, and she has been active in several volunteer organizations, including Transition House, a Cambridge-based nonprofit that supports women who are victims of domestic violence, where she served as treasurer and a member of the board of directors.