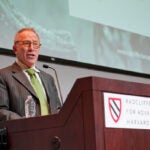 Life, reflected in the dead

Populations worldwide are growing older, fast. To manage that trend, people need to rethink their assumptions about education, work, and retirement. That’s the bad news.

The good news is that people are healthier and living longer. And by reshaping their course, they could see education last a lifetime and employment last longer and allow for more leisure.

The alternative to that scenario, according to Jack Rowe, a Columbia University professor of health policy and management, is a society that has wider gaps in opportunity, education, and health between “haves” and “have-nots” and that, more broadly, fails to rise to the challenges it faces.

Rowe spoke at the 50th anniversary symposium of the Harvard Center for Population and Development Studies. The event, “Reimagining Societies in the Face of Demographic Change,” took place Tuesday on Harvard’s Longwood campus and featured speakers who touched on issues related to global population change, including fertility decline, the roles of women, health and society, and the future of the center itself.

The center was founded in 1964 as the Harvard Center for Population Studies by Harvard School of Public Health Dean Jack Snyder and climate change pioneer Roger Revelle. This week’s anniversary event included a formal dinner Monday honoring Senior Visiting Fellow Sissela Bok, a longtime center researcher, at which current Director Lisa Berkman, the Thomas D. Cabot Professor of Public Policy and of Epidemiology at HSPH, announced a $50,000 gift in Bok’s honor to support the work of students, fellows, and junior faculty. The award will be called the Sissela Bok Prize in Population and Ethics.

At Tuesday’s symposium, Berkman outlined priorities for the center in the years ahead, pointing at women, work, and health; growing and aging societies; health inequality; sustainable development and climate change; and using big data to understand global population dynamics.

Berkman said the world is at a demographic crossroads, much as it was when the center was founded. Instead of contemplating that era’s concerns about an impending population bomb and shifting demographics due to improvements in health care, today people face a worldwide population that, while still growing, is marked by declining fertility and rapid aging, and in which the plight and future welfare of women is a key factor.

By focusing research on those priorities, Berkman said, the center can help explain the world as well as future trends. Among issues deserving attention, she said, is the United States’ lagging life expectancy, which in the 1980s was in the middle of the pack of industrialized nations and is now last among them.

“Over time, virtually every other industrialized nation has overtaken us. We now sit at the bottom of all OECD [Organization of Economic Cooperation and Development] countries in terms of life expectancy,” Berkman said.

Much of the problem, she said, may relate to women’s health. Recent studies showed that mortality rates for women actually worsened in 42 percent of U.S. counties between 1992 and 2006, “which I find really shocking.”

Berkman said there are some indications the trend is related to the huge movement of women into the labor force and the lack of the social protections that exist in many European countries. The dramatic rise in unwed motherhood — 41 percent of births in 2008 were to unmarried women, compared with just 5 percent in 1960 — could have similar long-term negative health effects, Berkman said.

“It seems like, in the U.S., being a single mother exerts a long-run risk to your health,” Berkman said.

Berkman pointed out that some nations are going to go see rapid aging of their populations over just a decade or two, far more quickly than many of the Western democracies, which have been able to adjust to a much slower trend. Though the trend has been relatively slow in the United States, there is still a lot of denial that an aging population presents a problem, Rowe said. Attention is focused on Social Security and Medicare costs, which are important, but miss a larger point, he said.

The central problem, he said, is that the structure of our “life course,” with education occurring early, long years of work with little room for anything else in the middle, and retirement lumped at the end, is outdated. There are not only concerns about the quality of each of those segments, but also broader questions about how an aging society meets its needs with fewer people in their productive years supporting more retirees.

The answer, he said, will rely on continued contributions from a healthier older population. That will require rethinking our life course to make the solution possible and palatable, something for which there appears to be little appetite so far.

The aging population is a mark of the success of the global health care system, largely a development of the 20th century, according to Harvard School of Public Health Dean Julio Frenk, who gave the opening remarks. Frenk reviewed the dramatic improvements in health over the last century and offered thoughts on governance of the global health system going forward.

The current system, under which nations are responsible for the health of their residents, is somewhat mismatched, Frenk said, since many of the factors affecting health are not confined by national boundaries. Frenk said it is unlikely that global health care governance will emerge, but added improved voluntary cooperation will be important as people address health concerns of the future.

“We need to manage these persistent global challenges. They’re not going to go away,” he said.