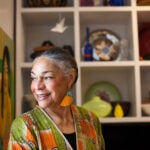 ‘I have always been temperamentally wired to carry on’

Philip W. Lovejoy travels frequently for his job; in fact, it’s one of the reasons he came to Harvard 16 years ago to head the travel program for the Museum of Natural History. Six years later, he assumed control of the travel program for the Harvard Alumni Association (HAA), a proverbial journey that culminated in this evening’s announcement naming him the new executive director of the HAA.

“Harvard is a singular place,” Lovejoy said, “filled with brilliant and engaging alumni who are making a huge impact in the world. The HAA empowers our alumni to connect with one another and build the foundation of a lifelong relationship with the University. That is exciting to me, and to be selected to lead this organization is a great honor.”

“This is a wonderful appointment,” Reardon said. “Philip has done a spectacular job as deputy executive director. He has initiated a number of new programs during his tenure, and he has built excellent relationships with our staff and with our alumni. He brings great personal strengths to this role.”

In his new post, Lovejoy will oversee the HAA’s robust programming and engagement initiatives, aimed at the University’s 300,000-plus alumni around the globe. Those initiatives span College reunions and Commencement activities in Cambridge and Harvard Club events in more than 70 countries worldwide.

Lovejoy’s appointment also punctuates a personal relationship with Harvard nurtured over a lifetime. “My father, Class of 1951, has been a committed friend, volunteer, and supporter of Harvard for over 60 years,” Lovejoy explained. “His love for and belief in Harvard left an indelible mark on me. Like my father, my mentor and predecessor Jack Reardon, and all our volunteers, I have an unending appreciation for Harvard, and I am energized and honored to have this thrilling opportunity to engage our alumni ever more deeply with Harvard.”

Drew Faust, president of Harvard University and Lincoln Professor of History, described the HAA’s pivotal role in strengthening the University’s alumni community, and by extension the University itself. “For well over a century, the Harvard Alumni Association has been a vital bridge linking alumni to Harvard and Harvard to alumni,” she said. “Philip will unquestionably build on Jack’s extraordinary stewardship that enables the HAA to convene thousands of alumni to engage and connect.”

Reardon, whose service to Harvard dates back nearly half a century, announced in December that he would transition from his full-time HAA duties to focus on other areas of his work, including expanding his fundraising efforts, serving on the Ivy League Policy Committee, and advising Faust and other Harvard leaders.

According to a survey of several thousand Harvard alumni respondents, overwhelmingly, the alumni community thinks positively about Harvard but wants to feel even more connected to the institution. Lovejoy sees it as his mission to deepen their ties to Harvard. A key community to help him and the HAA staff accomplish that is the impressive cadre of 14,000 alumni volunteers.

“Working with our HAA volunteers is among the most rewarding aspects of my role,” he said. “We all care deeply about Harvard — what it has meant to us; what it is doing for our students; and what the institution, through research, scholarship, and the work of our alumni, is doing for the world. That sentiment ripples through the vast network of HAA communities — Harvard clubs, shared-interest groups, ad hoc groups of alumni, the classes — and what our alumni do to keep it all going. It inspires me and our staff to do the best that we can to support their extraordinary work. During The Harvard Campaign, that work is more important to Harvard than ever.”

Tamara Elliott Rogers’74, Harvard’s vice president for alumni affairs and development, said, “At the HAA, Philip has been committed to engaging our worldwide community of alumni through a range of programs, from lifelong learning to public-service opportunities, digital communities, and more. In partnership with Jack, Philip has been a creative driving force behind many of these initiatives. The HAA is in great hands.”

HAA President Catherine A. Gellert ’93 agreed. “Philip has worked with our alumni volunteers around the globe in finding ways for them to stay connected with Harvard in their local communities. This is at the heart of the HAA’s mission.”

Lovejoy’s passion for the volunteer community extends beyond Harvard, whether he’s on the road or at home in Boston, where he chairs the board of the Boston Center for the Arts.