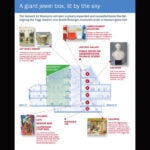 A giant jewel box, lit by the sky

It was the Texas native’s introduction to Harvard, and its energy inspired him. “I’ve always been very sensitive to my environment and to things that are contributing to the energy and the mood of the space,” he said. Later, when considering college, Walter was certain that if he attended Harvard, something important would happen and that the people and the environs “would change my life in ways I could not foresee.”

That’s just what happened. He will graduate with a concentration he didn’t know existed, a passion for dance he never expected, and a post-College fellowship to spend a year in a country that wasn’t on his radar four years ago.

Like many Harvard freshmen, Walter arrived on campus with a list of interests, in his case math, science, the visual arts, dance, and electronic music, among others. But during his sophomore year, the ground began “shifting pretty dramatically,” and he needed to prioritize. School, dance, and his connections with a group of friends topped his list.

Walter considered concentrating on neurobiology, but “I remember thinking, ‘Oh, no, no. This is much too planned for me.’” On a whim, he took an introductory class in the history of science, and fell in love.

He also fell in love with Jewish history, culture, and religion through his relationships with Alpha Epsilon Pi (“the Jewish fraternity”) and Harvard’s Hillel and Chabad houses. “They provided me with a supportive network of friends and peers who are diverse in their interests and can engage in deep conversation about their experiences and what they are learning today.”

With support from the Center for Jewish Studies at Harvard, he traveled to Jerusalem last summer to learn about history, and he will leave campus with a secondary concentration in Jewish studies.

Walter’s third passion was dance. Energized by Jill Johnson, director of the Harvard Dance Program, he performed in several new works, including “SEESAW,” which will be presented by the Harvard Dance Project at the Jacob’s Pillow Dance Festival in June. He was also introduced to Gaga movement language, a contemporary style of dance that originated in Israel, and traveled to Tel Aviv to study with its founder.

“He has an unlimited desire to explore artistic expression in his dance studies and in areas beyond the field with tireless energy, curiosity, rigor, and focus.”

Dancing with Johnson and other students helped Walter combine what he calls his “physical, creative, and academic intellects. It was unlike anything I’d ever done. Jill helped me see what dance had been and could be.”

Walter has a busy summer ahead. After graduation, he begins training for “SEESAW,” and then heads back to Dallas to spend time with family and friends. In August, he will travel to North Carolina as a 2014 Byron Fellow to participate in a weeklong session on leadership. He then will head to Israel for a year as a Benjamin A. Trustman Fellow, with support from Harvard’s Office for the Arts.

That year will be something of a soul-searching mission. He plans to live in Tel Aviv; practice Gaga; dance; visit synagogues, churches, and mosques, “and the sea.” He seeks adventures, “all with the purpose of putting myself in a different context and allowing a different tree to grow out from within my identity.”

A Quincy House affiliate, Walter is reflective when asked to consider what Harvard has meant to him. After a pause, he offers up a single word: people. “I’ve always said that Harvard is just a place, and it’s really the people that make it what it is. Everyone has something to bring to the table.”

Accordingly, he envisions a career that combines dancing and choreography with the visual arts, education, social activism, and his desire to help people “articulate what they think is important.”

“I expect people to prove me right in a way. I want to help them show me that they do have something to offer, something to bring to the table. I’d like to help people channel that somehow.”

Reflecting on the last four years, Walter also offered a note of thanks to his father, Rossi Lamont Walter Sr. ’86.

“My father has always been so supportive of me pursuing the things that interest me. He has never pressured me to do anything, including coming to Harvard. For that, I am eternally grateful.”