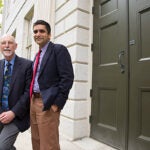 More than 100,000 donors have supported the effort to date

“How do we lead change?” Harvard President Drew Faust asked alumni at a recent gathering in New York City. “How do we sustain Harvard’s commitment to leadership in an unsettled environment for higher education, and in a rapidly changing world? How do we propel Harvard into new opportunities, and help forge leaders and craft solutions for the future we share?”

Today, Harvard reported that donors have contributed more than $3.8 billion — $1 billion since the public launch in September — for everything from financial aid to common spaces on campus, to faculty chairs, to cross-disciplinary research and arts programming. The current tally puts the University more than halfway to its $6.5 billion goal and includes more than 100,000 donors.

“Campaigns typically have ebbs and flows to them,” noted Tamara Elliott Rogers ’74, vice president for alumni affairs and development. “But the progress that we’ve seen so far is a testament not only to the generosity of our alumni and friends but also to the vision that the University has for the future.”

Since the campaign kickoff, all of Harvard’s 13 Schools have held or are planning to launch events for their own campaigns. This is the first University campaign in which all of Harvard’s Schools will participate for the duration.

At the launch, Faust laid out a number of aspirations, including pioneering new approaches to learning and teaching, attracting and supporting the most talented students and faculty, and creating a campus for decades to come.

Within each of the School’s campaigns are goals for fundraising to meet their own specific needs. Each School aims to achieve more funding for student financial aid and faculty support, among other priorities.

Thus far, the School of Public Health, the Faculty of Arts and Sciences, the School of Engineering and Applied Sciences, the Radcliffe Institute for Advanced Study, the Divinity School, the School of Dental Medicine, the Business School, and, most recently, the Kennedy School have launched their respective campaigns. The remaining Schools are slated to launch over the next year.

In addition to fundraising, the University is using this opportunity to further engage with alumni around the world.

The regional “Your Harvard” series began in London in January and has since convened gatherings in Los Angeles and New York. At each event, alumni were given the chance to hear from Faust about her vision for Harvard and the campaign, and to listen to some of the University’s leading faculty members. “Your Harvard: New York City” alone drew more than 600 attendees to the USS Intrepid, docked in the Hudson River, earlier this month.

Paul Finnegan ’75, M.B.A. ’82, a past president of the Harvard Alumni Association (HAA) and currently a member of the Harvard Corporation and co-chair of The Harvard Campaign, was one of those in attendance.

“One of the most exciting aspects of the campaign is that it engages everyone — alumni of all ages, parents, and friends of Harvard from around the world,” he said. “I, personally, find it so inspiring to be part of this effort that ensures Harvard will innovate and lead as a global institution for generations to come.”

Early signs of the campaign’s progress can already be seen around campus. House renewal has transformed Old Quincy into Stone Hall, with Leverett’s McClintock Hall slated to open for the upcoming academic year. Work has begun on the Richard A. and Susan F. Smith Campus Center (formerly Holyoke Center), which will transform the centrally located structure into a campus hub. Across the river, Tata Hall opened at Harvard Business School, and ground has been broken for the Ruth Mulan Chu Chao Center.

Likewise, funding for research, 56 new faculty chairs, and more than $430 million for financial aid will soon make an impact across the University.

The last University-wide campaign, called The University Campaign, took place during the 1990s and raised $2.6 billion, a record for higher education fundraising efforts at the time.

“At nearly 400, Harvard … remains a work in progress,” Faust observed. “[It] is called upon to meet and seize an uncertain future. Harvard endures because Harvard changes. And this work of change and progress is the work of the campaign.”