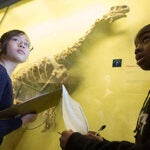 A museum as school lab

Harvard University announced today that alumnus Kenneth Griffin ’89, founder and chief executive officer of Citadel, has made the largest gift in Harvard College history. The $150 million gift is principally focused on supporting Harvard’s financial aid program, which Griffin described as “an investment in the next generation of leaders as we continue to break down barriers to an outstanding education.”

Griffin’s gift, which will impact as many as 800 undergraduates every year, will:

This year also marks the 10th anniversary of the Harvard Financial Aid Initiative (HFAI), a groundbreaking effort to make the College more accessible to outstanding students around the world. HFAI ensures that qualified students of all backgrounds have access to a Harvard education, underpinning Harvard’s need-blind admission policy. The Class of 2017 has 431 HFAI recipients, more than any previous freshman class.

Griffin, who will celebrate his 25th Harvard College class reunion in May, has long been a leader in financial aid initiatives at Harvard. In 1999, in his 10th reunion year, Griffin established a scholarship named in honor of his grandfather, Wayne R. Gratz. He also served on the Faculty of Arts and Sciences (FAS) Financial Aid Task Force, which approved a new financial aid case statement for the College and focused on raising support from alumni. HFAI launched during this period.

“Ken Griffin’s extraordinary philanthropy is opening Harvard’s gates wider to the most talented students in the world, no matter their economic circumstances,” said Drew Gilpin Faust, president of Harvard University and Lincoln Professor of History. “Harvard is more accessible than ever before, and, with an increased focus on teaching, learning, and research across the University, we are better prepared to educate young scholars in all areas of academic inquiry.”

“It is extremely important that students of all backgrounds have the opportunity to challenge themselves, learn to solve complex problems, and ultimately better our world,” said Griffin, who started his career as an investor from his Cabot House dorm room. “My goal with this gift is to help ensure that Harvard’s need-blind admission policy continues, and that our nation’s best and brightest have continued access to this outstanding institution.”

“Ken’s astounding philanthropic leadership has set financial aid — one of the most important priorities of the College’s capital campaign—on a lasting foundation,” said Michael D. Smith, FAS dean and John H. Finley Jr. Professor of Engineering and Applied Sciences. “Ken’s gift will help us sustain our revolutionary financial aid program and ensure that once a student is admitted to Harvard College, cost of attendance is never a barrier. It will impact the lives of students and their families, now and for generations to come.”

While the cost of higher education has increased nationally, Harvard remains firmly committed to a need-blind admission policy that meets every student’s demonstrated need through financial aid. Since 2007, Harvard’s budget for undergraduate financial aid has increased by 88 percent, so that today:

Griffin’s gift includes $10 million to establish a professorship at Harvard Business School (HBS). The new Griffin Professorship of Business Administration will support an outstanding faculty member who excels in teaching and the case method, and who generates the field-based intellectual capital that advances the practice of management. HBS Dean Nitin Nohria expressed his appreciation for Griffin’s gift. “Our faculty are at the core of our mission of educating leaders who make a difference in the world. Ken’s gift will help us achieve that,” he said.

Faust also praised Griffin’s decision to establish an HBS professorship, underscoring what she termed “our shared belief in the importance of attracting both world-class students and unparalleled faculty in each of our Schools.”

Griffin earned a bachelor’s degree in economics in 1989. He founded Citadel in 1990, and the firm has grown into one of the most successful financial institutions in the world.

Griffin is an active supporter of various boards, including the Chicago Public Education Fund, the Economic Club of Chicago, and the Art Institute of Chicago.