From Tonga to Tercentenary 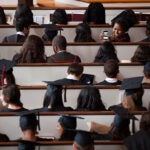 Many students come from great distances to learn at Harvard, but few have traversed such disparate worlds as Moana ′Ulu′ave. You might even say her journeys would make a fantastic story.

Born to parents and grandparents from the South Pacific island nation of Tonga, ′Ulu′ave, 26, grew up among the frosty peaks of Salt Lake City, Utah, where her family settled in 1986 to find better economic and educational opportunities and to be close to the spiritual heart of their Mormon faith.

Her grandfather once farmed taro and manioc (cassava) roots; her mother, Losaline, works at a book bindery; her father, Alama, was until recently a maintenance worker at the University of Utah. All set high expectations for ′Ulu′ave and her five sisters.

“He used to drive us around and point out the law school and the medical school and say, ‘One day you’re going to come here,’” said ′Ulu′ave, a spoken-word storyteller and writer in the Arts in Education program at Harvard Graduate School of Education (HGSE), who is receiving her master’s degree. “I always thought it was strange that he didn’t have that dream for himself.”

Despite living half a world away, Tonga’s rich cultural history and oral traditions were always close at hand. ′Ulu′ave’s grandmother is known as “a keeper of stories,” while her father often makes videos of storytelling to preserve them for future generations. “I grew up with them telling me stories,” she said. “I didn’t know I was learning those things, but the stories were everywhere. I just had to pick them up and tell them as well.”

Beyond class, ′Ulu′ave helped lead a weekly writing course at a women’s prison in Framingham, Mass., as part of a program run by Boston University.

“For me, prison means something different. I come from a working-class background. I have friends who are in prison. I look around and I think: These women could be any of my relatives in a lot of ways,” she said. “For a lot of women there, education is redemptive. You’ve been punished, that’s why you’re in prison, and the only thing of your own that you have is your mind. And here you are, exerting that power that you have to obtain a piece of paper that says ‘Hey, you’re still valuable in society.’”

A Gates Millennium Scholarship winner, ′Ulu′ave graduated from Brigham Young University in 2012, leaving the familiar, communal comforts behind to live in Cambridge, “a place that has no context for me,” she said. “I was so surprised at how much the relationships here meant to me. I didn’t know I’d find community.”

“Moana has got this incredible joy and humor, but she is a deeply and profoundly serious person,” said Steven Seidel, the Patricia Bauman and John Landrum Bryant Lecturer on Arts in Education and director of HGSE’s Arts in Education Program. “She’s enormously intellectually curious and hungry,” with a very clear sense of the importance and power of community, he said.

′Ulu′ave received the Intellectual Contribution award, an honor given annually to one student in each HGSE master’s program.

“So many of her peers nominated her for that award and spoke about being inspired by her as … one of the few Tongan students to ever come to Harvard,” said Seidel, “but also just as someone who is both growing and curious and evolving and also so deeply rooted in her values and the values of her culture. It’s been inspiring to all of us — certainly inspiring to me.”

As the first in her family to earn an advanced degree, ′Ulu′ave said dozens of far-flung relatives will join her here to celebrate.

“In terms of my community and my family, this is making real a lot of dreams that they’ve had for generations. And when I say, ‘I am graduating,’ the indigenous ‘I’ is always the ‘We.’ So, ‘We are graduating.’ I appreciate all the sacrifices that were made even before I stepped on this campus.”